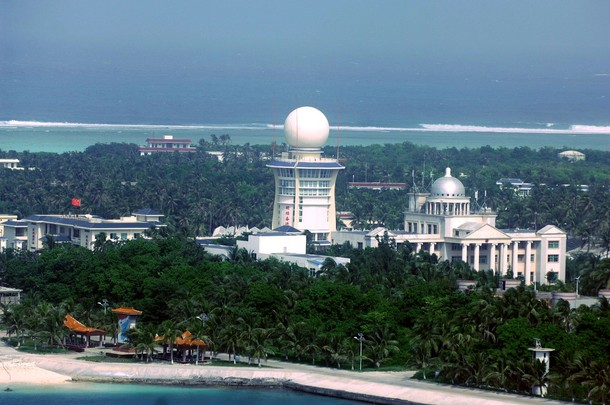 It’s not relocating aircraft carriers to the Pacific or stationing 2500 marines in Australia but China’s provocative establishment of a new city, Sansha, in the disputed Paracels chain takes the geopolitical drama in the South China Sea to a new stage. This escalating assertiveness may have a larger strategic importance as part of Beijing’s response to the often touted US “pivot” or rebalancing in Asia.

Proclaiming a new city on the 2km long atoll in the South China Sea (population some 150 fishermen), replete with its own mayor, municipal council, and military garrison takes the issue a step beyond diplomatic quarrels with other claimants, in this case the Philippines and Vietnam. China appears to also view its newly annointed Sansha as a sort of administrative and monitoring hub for the wider South China Sea area.

Beijing’s move follows an episode in June where Vietnam passed maritime legislation asserting their claims to islands in the Paracel and Spratly chains. Not coincidentally, Beijing’s moves also come on the heels of a leaders meeting of the Association of Southeast Asian Nations (ASEAN) which failed to agree on a statement to issue in regard to the disputed islets and reefs in the Paracel and Spratly island archipelagos which contain rich fishing grounds as well as oil and deposits. While ASEAN, with US support, has sought to resolve the disputes in multilateral talks, China has insisted on addressing each claimant bilaterally, where it has greater leverage.

Beijing has long asserted that all within what are known as the “nine dash lines,” some 80 percent of the South China Sea, is sovereign Chinese territory. This claim contradicts the Law of the Sea Treaty which limits economic zones to within 200 miles of a nation’s continental shelf. Beijing argues that these claims were Chinese territory prior to the LOS treaty, and are somehow consistent with it. However, China did not control Woody island (which they call Yongxing Dao) until 1974 when they engaged in a naval clash with Hanoi which left 71 Vietnamese dead.

In 2010, China suggested that these disputed South China Sea territories were part of its “core interests” in the same non-negotiable sovereign territory category as Taiwan and Tibet. Beijing subsequently appeared to walk back that view after a strong reaction by ASEAN and the US. However, China’s new measures do not inspire confidence that it has a more restrained definition of core interests.

Chinese actions may be designed to send multiple messages beyond which claimant controls what speck of land. Nationalism is a volatile force in China, and to many Chinese being “pushed around” by small countries like the Philippines and Vietnam is an insult to the Middle Kingdom. At a time when China’s economic growth faces serious obstacles and political leadership is in the process of transition, popular nationalism may be seen as a welcome diversion.

But there is a larger point as well. Ever sinceWashington announced its “rebalancing,” with the Pentagon announcing in June that it would station 60 percent of its navy in the Pacific by 2020, Chinese strategists have been casting about for how to respond. The United States takes no position on the territorial disputes in the South China Sea other than a desire to see them resolved peacefully. The principal US national interest is in maintaining unimpeded freedom of navigation.

Could it be that Beijing sees its assertiveness as a low-cost, low-risk way to show Washington a bit of its own version of the Monroe Doctrine? To be sure, China is well aware that its assertiveness is not well received in East Asia, and tends to lead smaller nations to tilt to the US to balance China. But Beijing seems to be calculating that despite the more robust US military posture in the region, China can throw its weight around and the US response will be limited to diplomatic reprimand. Beijing seems to be betting that the US will not intervene militarily if there is a naval skirmish between China and Vietnam or the Philippines in the South China Sea.

It may a message from Beijing in effect, “this is our neighborhood, you don’t call the shots.” Perhaps. But where does such logic take China’s role in the emerging international order? It is one thing if in a rules-based world, China seeks a larger role in shaping the rules, commensurate with increased economic and political weight. It is quite another if the message is simply about power. If the latter is the case China is likely to be more successful in mobilizing a broad-based coalition of states seeking to counter- balance it than to obtain its objectives as a singular actor.

Robert A. Manning is a senior fellow at the Atlantic Council. He has served as Senior Strategist, DNI National Counterproliferation Center until June 2012 , on the National Intelligence Council, and on the State Department Policy Planning staff (2005-08).