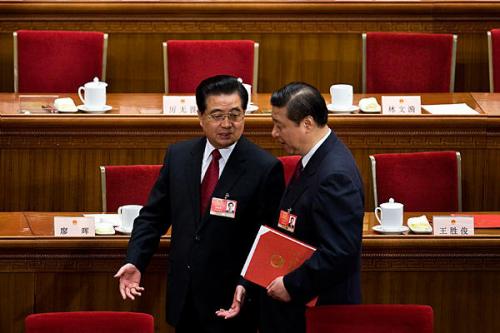 Imagine that an American intelligence agency organizes an “exercise,” as one occasionally does, on how to manage an unwanted but inescapable Washington role in a Chinese leadership struggle.

Throw in the following scene-setting facts:

It’s no wonder that the intellectual salons of Washington have grown a bit bored with the ongoing U.S. election campaign and have shifted their interest instead to Chinese domestic politics. The reasons are obvious: The details are juicier, the drama is more immediate and the historic stakes are considerably more significant.

That’s because any U.S. president, whether named Obama or Romney, will operate within a well-established constitutional framework and democratic habits. While the U.S. has managed 43 peaceful transitions of power over the past 223 years, Communist-led China has managed a smooth handoff only once since its 1949 revolution, and that was in 2002, when Deng Xiaoping engineered the rise of the current premier, Hu Jintao.

Former U.S. National Security Adviser Brent Scowcroft believes China has entered its most decisive domestic political period since the weeks preceding the government crackdown on the Tiananmen Square protests in 1989, which resulted in the arrest and purge of Deng Xiaoping’s presumptive heir, Zhao Ziyang, along with a large-scale removal of other officials sympathetic to the protesters. Tiananmen’s immediate aftermath strengthened the hand of hardliners, until Deng, with difficulty, reasserted himself and market reforms in 1992.

Former U.S. National Security Adviser Stephen Hadley regards the current split within the Chinese leadership to be the most severe since 1971. It was then that Defense Minister Lin Biao, in an apparent attempt to defect to the Soviet Union, died in a plane crash in Mongolia while trying to flee the country after a failed attempt to assassinate Mao Tse Tung. The Communist Party branded him a traitor posthumously.

China remains the world’s most important engine for economic growth, it has become the biggest owner of U.S. debt, and it has vastly expanded its global reach through investments and trade. China is likely to surpass the U.S. in the next decade as the world’s largest economy – and its political influence and military capabilities grow apace. Domestic uncertainties now make China the most crucial wild card for the global future.

Beyond that, the country’s leaders in the coming years will face a set of new strains that defy easy solution: Growth will inevitably slow, a rising middle class will make increased political demands, growing wages will make export markets more difficult to win, and the demographics of an aging society and its single-child policy will produce new social and financial pressures.

Thus, the fifth generation of Communist leaders, who will be installed at the 18th Party Congress this autumn, will inherit a China whose unreformed political structure isn’t equipped to manage the demands of its increasingly complex, modern state. They also will face a public angered by widening reports of official corruption amid growing gaps in income.

The seven new individuals who this autumn will be appointed to the nine-member Central Politburo Standing Committee of the Communist Party, the country’s highest decision-making authority, have been bred during the country’s meteoric economic rise. If the current scandal has revealed anything, it is a seething unrest among party leaders over how to manage a country that has moved so far beyond communist ideology.

The conventional wisdom is that the battle lines have been drawn between those who advocate liberal constitutional and political reforms – most prominently represented by Premier Wen Jiabao – that would bring greater pluralism and more powerful rule-of-law, versus those who favor greater state and party controls. Yet lines are far messier and opaque than that: China’s factions, personal rivalries and underlying ideologies defy Western categories.

To sort out the plot, watch closely to see which shoes drop next. That may indicate how much support Bo had at senior leadership levels both for himself and his populist approach, which was laced with Maoist nostalgia and “red culture,” emphasizing large public works, state company ownership and a brutal (if ultimately hypocritical) crime and corruption crackdown.

The standing committee removed Bo, but it’s not yet clear what party disciplinary or criminal actions he will face – or how transparent they will be for the public. In particular, how might party leaders handle the powerful Chinese interior minister Zhou Yangkang, a Bo ally, whose seat on the standing committee is the one Bo had sought? Will military heads roll, as it is rumored that Bo has enjoyed a following as well among uniformed brass.

Most analysts still believe the party congress will produce its forecast personnel outcome: the elevation of Chinese Vice-President Xi Jinping. Indeed, the Bo scandal may have guaranteed that outcome as leaders circle their wagons. But watch as well who takes the other leadership seats, in particular Wang Yang of Guangdong province, the leading next-generation reformist leader, who had been Bo’s predecessor in Chongqing.

China’s leaders seem to agree that the status quo is unsustainable. What’s at stake is who will change it – and in which direction.

For President Obama, this exercise provides just one policy course: Do no harm, avoid providing hardliners a scapegoat, and pray for the best.