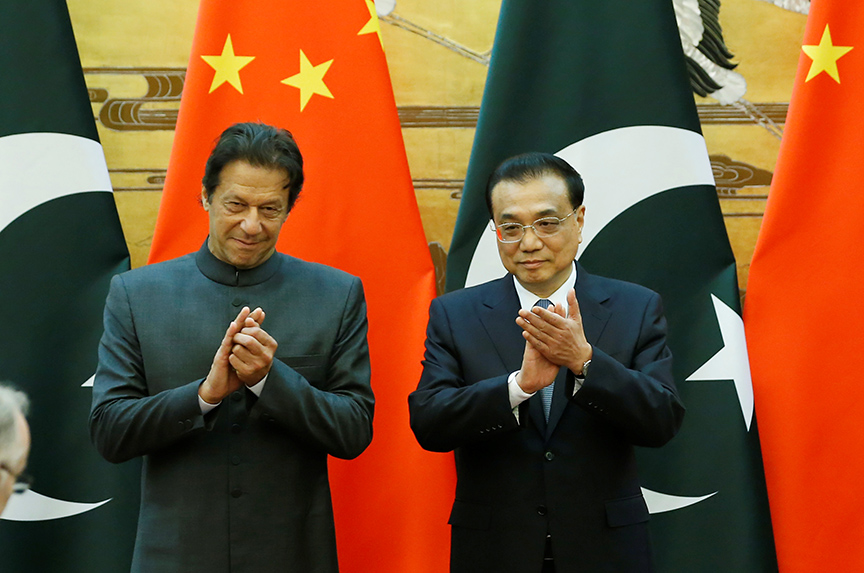 Islamabad seeks yet another IMF bailout

Pakistan, faced with a mounting debt in part due to a multibillion-dollar infrastructure project with China, has turned to the International Monetary Fund (IMF) for yet another bailout. The IMF, however, has made clear that a loan would be contingent on Pakistan being completely transparent about its debts to China; the United States—one of the largest stakeholders in the IMF—has said that Pakistan must not use the loan to repay China.

Previous Pakistani administrations overestimated the role of largescale infrastructure projects as drivers of economic growth and underestimated the costs. While CPEC has the potential to bring much-needed economic development to Pakistan, its price tag threatens to plunge the country further toward fiscal instability.

And so it was that Pakistani Prime Minister Imran Khan surprised supporters in October when his government sought a bailout from the IMF. On the campaign trail, Khan had asserted that Pakistan would never seek assistance from international organizations, specifically the IMF. But it was only a matter of time before the new prime minister came to the realization that Pakistan’s economy cannot possibly run on public donations, auctions of cars, and cattle.

While Pakistan secured $6 billion from Saudi Arabia and an undisclosed amount from China to avert a balance of payments crisis, IMF support is critical for long-term planning.

Pakistan remains in continued negotiations with the IMF regarding another financial bailout, a situation that is not unfamiliar to the state. Despite receiving  a dozen IMF bailouts since the 1980s, the country has been unable to shake its dependence on the Fund.

Khan’s administration has promised that this will be the last IMF loan. But if Pakistan is to break its cycle of dependence on international lenders, it must implement much-needed institutional reforms, tackle endemic corruption, and address fiscal irresponsibility.

In 2013, Pakistan received a $6.6 billion loan from the IMF. This loan was aimed at addressing slow growth, declining foreign reserves, and a growing fiscal deficit. Pakistan continues to face these challenges today because its government did not adhere to the prescribed policies beyond the program’s three-year term. Khan was elected prime minister in August 2018.

Despite efforts to improve the business environment, foreign investment has been consistently low due to corruption and the security challenges in Pakistan. While the IMF program sought to reduce tax evasion and broaden the tax base, Pakistan’s tax-to-GDP ratio is among the lowest in the world. The IMF program was also aimed at reforming Pakistan’s energy policy in order to make better use of energy resources. Here, too, the challenge persists.

Although Pakistan did meet certain objectives and completed the program in 2016, it was essential for the government to continue enforcing policies. This effort, however, was inconsistent.

The current balance of payments crisis partially stems from a surge of expensive imports—largely energy—and a dismal lack of high-value-added exports. Over 20 percent of existing energy is lost to pilferage. The state loses hundreds of millions of dollars annually due this theft. This has also made it necessary for the state to import expensive fuels.

As Pakistan’s demand for energy soars, urgent efforts are required to address the problem of theft and improve efficiency in the energy sector.

Corruption is a massive deterrent to foreign investment and a barrier to local businesses. In 2017, Pakistan ranked 117th out of a total of 180 countries in Transparency International’s global Corruption Perceptions Index.

The fact that the Khan administration has made addressing this challenge central to its agenda is a huge step in the right direction and demonstrates a political will for improvement.

Current international sentiment, meanwhile, may very well preclude Pakistan from relying on foreign support for future bailouts. Given the precarious state of US-Pakistan relations, in particular, it is unlikely that Washington will continue to support repeated financial assistance to Pakistan without substantial progress in addressing the key underlying dysfunctions of Pakistan’s economy.

Although Khan came to power as a populist leader on a campaign for state welfare, his government needs to be honest with the public that most of those promises will take longer than anticipated. The government should instead focus on rebuilding institutions that will ultimately benefit the people and lay a good foundation for the future.

As witnessed in the past, it is not as if the IMF’s proposed policies have been entirely ineffective in targeting Pakistan’s macroeconomic problems. However, it is the inability to enforce institutional reforms beyond the length of the program, the deeply entrenched corruption in society, and the unnecessary spending on infrastructure projects which ultimately render the IMF programs inefficient and  are the chief obstacles to a brighter future for Pakistan.

Pakistan must choose between another IMF bailout, which will mean seriously addressing underlying dysfunctions and curbing infrastructure projects, or preserving its relationship with China and falling further into debt.

The Khan administration’s promises, especially that this will be the last IMF bailout, can only hold true if it improves efficiencies in the economy instead of engaging in further large-scale expenditure.

Aafreen Afzal is an intern at the Atlantic Council’s South Asia Center. Follow her on Twitter @Aafreen_Afzal.