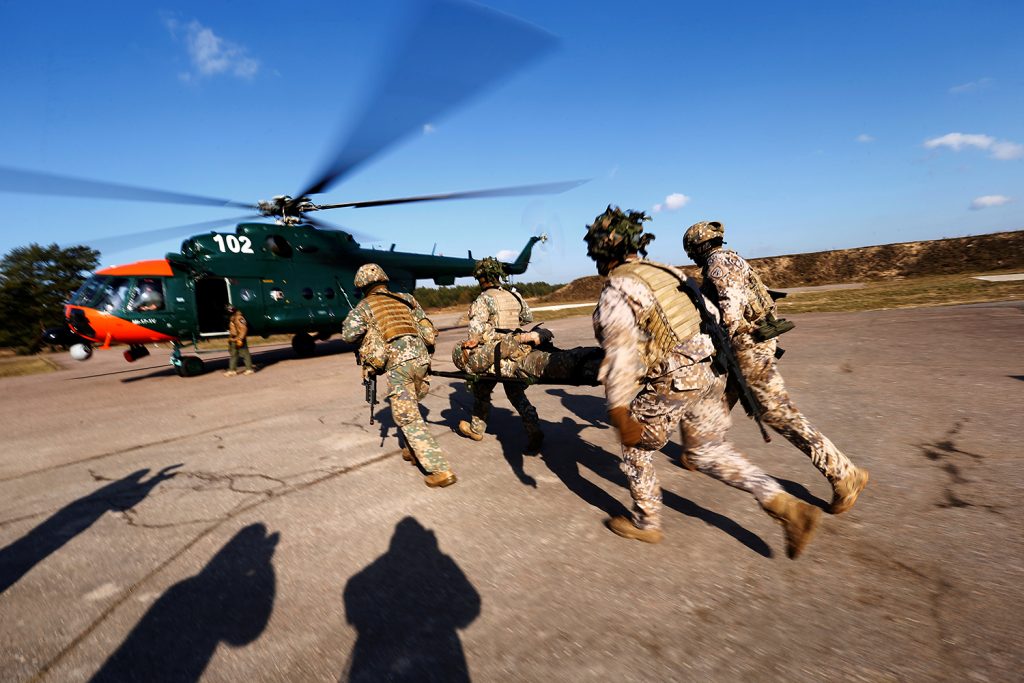 On March 25, the NATO Alliance announced that twenty troops of its multinational battalion deployed in Lithuania tested positive for coronavirus. The unit, part of the Alliance’s forward defense against Russia, has since reduced its activities in order to sustain its readiness.

The same day, the US Department of Defense issued a stop-movement order for military personnel and exercises over the next two months, a decision designed to curb the spread of novel coronavirus (COVID-19). That action alone—which has global ramifications for US military posture, operations, and relations with allies, friends, and adversaries—underscores the strategic impact of the coronavirus epidemic on transatlantic security. Bio-warfare, whether launched intentionally or not, has entered a new age of heightened relevance.

Here is a sampling of the longer-term issues, often overlapping, that allied and partner defense planners will be forced to confront:

COVID-19 will likely put a damper on, if not reverse, recent increases in European defense spending as countries grapple with the economic impact of the pandemic. There will be pressure to shift financial priorities to address the fiscal and health consequences of this pandemic, which could sound the death knell to the 2014 Wales defense investment pledge in which NATO nations recommitted to spending an equivalent of 2 percent of gross domestic product (GDP) on defense. That could reignite a burden-sharing debate damaging to transatlantic solidarity, and by consequence, the willingness of the United States to keep forces in Europe.

The COVID-19 outbreak in the multinational NATO battalion deployed in Lithuania is surely not the last of such incidents. What happens to the credibility of the Alliance’s deterrent posture if frontline forces are incapacitated by a pathogen? The US DEFENDER-Europe 20 Exercise, a major show of US readiness to deploy significant forces to Europe, has been curtailed due to coronavirus concerns. Allied forces must consider how to sustain readiness and exercises amidst epidemics and pandemics. The Alliance will have to design policies and protocols to ensure that in future pandemics military units, especially quick response elements, will be able to maintain necessary levels of readiness and the ability to move forces through the territories of member nations and to conduct multinational operations. The same issues equally apply to the European Union’s (EU) battlegroups.

Moving Out: A Comprehensive Assessment of European Military Mobility

Military mobility is the logical and critical next step to enhancing the 21st century conventional deterrence posture throughout Europe, an essential part of the formula for keeping the peace.

C2 is a key aspect of readiness, and COVID-19 has underscored how critical effective communications are—amidst a pandemic—to sustaining civil order, public health, and economic well-being. The same is true for the military, which will have to consider how to increase the robustness of its C2 links from the four-star to the private amidst the unique stress of a pandemic. NATO should assess in real time whether and how its command and control elements are impacted by the current crisis as a means of improving the resilience of its lines of communications in future emergencies. This might be especially true for nuclear C2, which could take on added significance in a pandemic if conventional deterrence is severely degraded because of the effect on conventional forces of a highly contagious and debilitating disease.

Vulnerability of industry and supply chains:

The effect of the current crisis on the defense industry remains to be seen, but the implications of a prolonged global shutdown are worrying. Manufacturing stoppages may delay the delivery of major platforms, deplete weapons and ammunition stockpiles, or limit the availability of parts and spares. Widespread disease could impact the ability of technical experts to work, slowing the spin-up of exquisite capabilities or hindering our standing in vital competitions around capabilities like artificial intelligence. Moreover, devalued companies may be susceptible to acquisition by malign actors. Defense planners will need to work with industry to redouble efforts around the continuity of critical operations, tighten logistical pipelines, and strengthen laws to prevent foreign takeovers of vulnerable companies.

Russian and Chinese use of hybrid warfare, particularly the weaponization of disinformation, has proven to be an effective means to attack democratic governments. The open nature of democratic societies and the prominence of social media have left populations vulnerable to influence operations that engender plausible deniability, undermine the credibility of democratic processes and institutions, and aggravate the fault lines of cultural divisions. The fear that accompanies a pandemic may create even more fertile conditions for the dissemination of false information and curation of conspiracy theories, especially in instances where governments and militaries use extraordinary authorities to respond to the crisis in domestic settings. Understanding the ways in which adversaries exploit pandemics will be critical for developing resilience against such approaches.

Permanent versus rotational presence of US military forces:

A significant portion of the US military presence in Europe requires rotational deployments. If force rotations are going to be limited by pandemics or epidemics, should the United States consider more permanent stationing of troops in Europe, including perhaps a transition of its current rotational presence into one that is permanent? By returning to a larger and more geographically dispersed footprint on the continent, the availability of US forces for European contingencies—the most critical factor for NATO’s deterrent posture—will be more readily assured.

Military organizations around the world have been called into action to support civilian efforts to cope with COVID-19. National militaries are distributing and delivering equipment and supplies, transporting patients, deploying hospital ships, building and manning hospitals, and supporting local law enforcement. Defense establishments will be expected to provide more resources and capabilities to assist in future bio-events, to include mobile and rapidly constructible field hospitals, military policing, and stockpiling and delivery of critical medical equipment. Assessing how Carabinieri units are currently functioning in Italy and learning lessons from advanced “total defense” concepts in the Nordic states will be important to building a playbook for how NATO militaries can best support civil authorities.

In light of the above, should the Alliance be more robustly postured to contribute to civilian pandemic response? Relatively little-known NATO capabilities—like the Euro-Atlantic Disaster Response Coordination Center, the Strategic Airlift Capability, and the Strategic Airlift International Solution—are taking on tasks in pandemic response and could serve as the foundation for an expanded NATO role. On another front, is this the rallying issue around which to finally settle lingering questions about the viability of NATO-EU cooperation? These are issues that should be included in the Alliance’s reflection process launched at the December London Summit.

COVID-19 is a new brand of crisis that is fundamentally shifting the ground beneath us. Its implications for military operations and transatlantic security are as profound as they are for the health and economic wellbeing of societies on both sides of the Atlantic. Our military establishments, including the NATO Alliance, will have to adapt operations and even expand their mission sets to match these challenges. The next pandemic could be driven by an even more lethal and contagious pathogen and the Alliance and its nations must use this current crisis to ask hard questions about how best to prepare for that contingency.

Christopher Skaluba is director of the Transatlantic Security Initiative in the Atlantic Council’s Scowcroft Center for Strategy and Security.