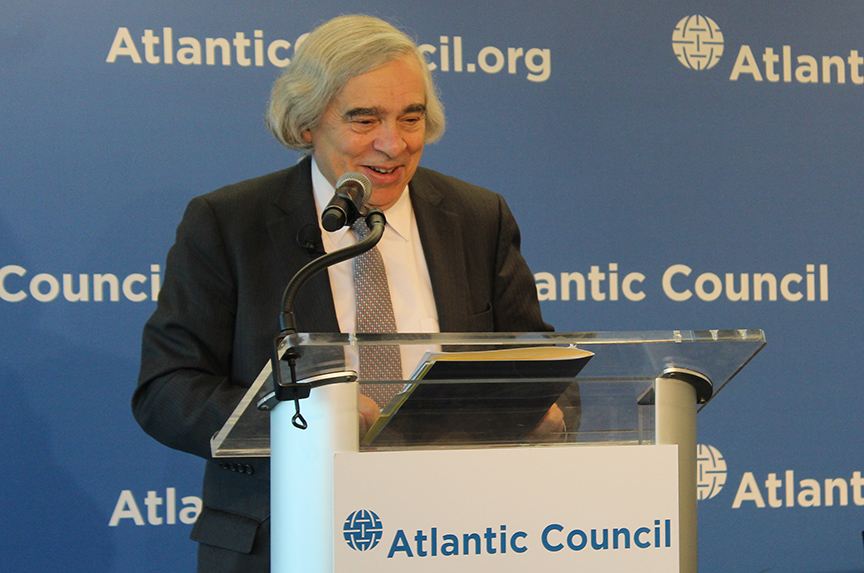 As US President Donald J. Trump grapples with the North Korean nuclear crisis, two former US officials have some words of advice: attempt dialogue before pre-emptive military strikes, and broaden the scope of that discussion to include the security needs of the region, including North Korea’s.

Ernest Moniz, who served as energy secretary in Barack Obama’s administration, said heaping sanctions on North Korea alone cannot produce results and that this approach will only “spin wheels.”

R. Nicholas Burns, who served as undersecretary of state for political affairs in George W. Bush’s administration, said exhausting the diplomatic option before considering the military one is the “wisdom” gleaned from the first nuclear age. “Kim Jong-un is not a more deadly rival of the United States than Stalin was or Khrushchev was in the 50s and 60s,” he said.

Trump’s “appalling lack of attention to diplomacy,” his weakening of the US Department of State, and disparagement of US Secretary of State Rex Tillerson’s support for negotiations to resolve the North Korea crisis is “irresponsible for the American leader to think that only military force applies,” Burns said.

“Diplomacy is not a panacea, but you have to try it first,” he added.

Moniz and Burns spoke at the Atlantic Council on November 16 at a two-day conference on “Nuclear Strategy and Security in the Second Nuclear Age.” The event, hosted by the Atlantic Council’s South Asia Center, also marked the launch of “Asia in the ‘Second Nuclear Age,’” a report by Gaurav Kampani, a nonresident senior fellow in the South Asia Center, and Bharath Gopalaswamy, the center’s director.

North Korea dominated the agenda of Trump’s visit to Asia early in November. The trip included stops in South Korea, Japan, and China—three nations that are increasingly anxious about North Korea’s succession of nuclear and inter-continental ballistic missile (ICBM) tests.

Moniz, who was a key member of the US team that negotiated the nuclear deal with Iran in 2015, said: “In the Iranian case, a focus exclusively on the nuclear issue was the right choice… in North Korea, the nearly exclusive focus on North Korean nuclear weapons is the wrong choice to make.”

Noting that North Korea, unlike Iran, has nuclear weapons, Moniz suggested that there is a need to enlarge the discussion to include the overall security requirements not just of the United States, but of North Korea and its neighbors as well.

“This is a classic case where you have to enlarge the problem in order to have any chance of a solution,” he said. “The solution includes the ultimate denuclearization of the Korean Peninsula, but we can’t be Pollyannaish and expect anything of that type to happen anytime soon.”

China, the main supporter of North Korean leader Kim Jong-un’s regime, is particularly concerned about instability on the Korean Peninsula that could send refugees streaming north. The South Korean government, meanwhile, is worried about Trump conducting a military strike without consulting Seoul.

Moniz, a member of the Atlantic Council’s International Advisory Board, said that while Japan and South Korea are important, discussions on resolving the crisis should start with China. These discussions should cover the question of reunification of the Korean Peninsula, the United States’ military posture in Asia, joint military exercises, and missile defense, he said.

While acknowledging that this agenda would produce “inconvenient discussions,” Moniz said: “Until we start to honestly face those and at least start with a general framework to be able to approach North Korea for initial discussions, I don’t see how this does anything except spin wheels.”

“Diplomacy is not a panacea, but you have to try it first,” said R. Nicholas Burns, who served as undersecretary of state for political affairs in George W. Bush’s administration. (Atlantic Council)

Burns, who is an Atlantic Council board member, said it is important for the Trump administration to be “stable, strong, and reassuring” toward Japan and South Korea—both US allies.

“We don’t want a dynamic where either South Korea or Japan at some point in the future could think that their security could be best assured by becoming nuclear weapons powers themselves,” he said.

In the midst of the nuclear crisis with North Korea, Trump looked into the possibility of withdrawing from a trade deal with South Korea, a development that caused some unease in Seoul.

Burns said Trump should embrace South Korea’s leadership, but acknowledged that the president had done well to push China to take a tougher stand on North Korea—a shift marked by Beijing’s support for sanctions.

In a discussion with Manish Tewari, a distinguished senior fellow in the Atlantic Council’s South Asia Center, Burns described North Korea as a “nuclear brigand.”

US role in a second nuclear age

Analysts describe the post-Cold War nuclear buildup in the Indo-Pacific region as the dawn of the second nuclear age.

Frederick Kempe, president and chief executive officer of the Atlantic Council, noted that this period is marked by “great powers establishing patterns of provocations and demonstrating a willingness to violate international treaties and agreements; rogue nations with a penchant for proliferation are not just turning to nuclear but also chemical, biological, cyber.”

“Defense experts do say we are in a second nuclear age defined by an unstable, multipolar nuclear order in contrast to the clearer calculations driven by the United States and Russia that ordered the Cold War years,” he added.

Outlining a key challenge of the second nuclear age, Burns cited Russian President Vladimir Putin’s aggression in Russia’s neighborhood and his strategy of seeking strategic depth south and west of its borders.

“I don’t believe it elevates the probability of a nuclear conflict in Europe, but it reintroduces the competition,” he said.

In Middle East, Burns listed the sharpening rivalries between Saudi Arabia and Iran as a negative strategic development.

He worried that in the second nuclear age the issue of the safety and security of nuclear weapons has not been a high enough priority for Trump’s administration. Obama, in comparison, led by example and started the Nuclear Security Summit, he pointed out.

“I don’t see at the dawn of the second nuclear age the same commitment yet from our government that we saw from every American government—Truman through Obama; Republican and Democrat,” Burns said.

“The big issue here is… is the United States going to think of itself as a purposeful world leader?” he added.

Though Trump has been critical of the nuclear deal with Iran, Moniz said the agreement achieved a “substantial rollback” of Iran’s nuclear activities.

Noting criticism of the deal’s sunset clauses—that restrictions imposed on Iran would be lifted in ten to fifteen years—Moniz said the verification and transparency measures are, in fact, the agreement’s biggest achievement. They do not lapse, and are ultimately the key for the agreement.

Trump decided in October not to certify Iran’s compliance with the terms of the agreement, kicking the issue over to the US Congress to decide on whether to reimpose sanctions on the Islamic Republic.

Both Moniz and Burns said it would be a “disaster” for the United States to walk away from the deal while Iran is in compliance. The other signatories to the deal—the United Kingdom, France, Germany, Russia, and China—have affirmed their continuing commitment to the deal.

“There is every indication that Congress has heard loud and clear the statement of our European allies, in particular, about the importance of staying in the deal, and they will not create space in their actions between us and the Europeans,” said Moniz.

Burns, who was the lead negotiator on Iran’s nuclear program in second term of Bush’s presidency, said it would be a “major strategic mistake” for the United States to walk away from the deal because “the British, French, Germans, Chinese, and Russians will not walk away with us.”

Burns, who also played a key role negotiating the US-India civil nuclear agreement in the Bush administration, said he worries about the prospect of an “accident or a miscalculation in the heat of an India-Pakistan crisis that could escalate to the use of nuclear weapons.”

The Bush administration refused to strike a similar nuclear deal with India’s western neighbor, Pakistan, citing the country’s record of nuclear proliferation. Burns said he still stood by that decision while calling Pakistan the “weak link” in nuclear security in South Asia.

Image: “There is no question, from the science, that there is a need for risk management,” said Ernest Moniz, who served as US secretary of energy in the Obama administration, adding that “a decision to withdraw from Paris flies in the face of the science.” (Atlantic Council)