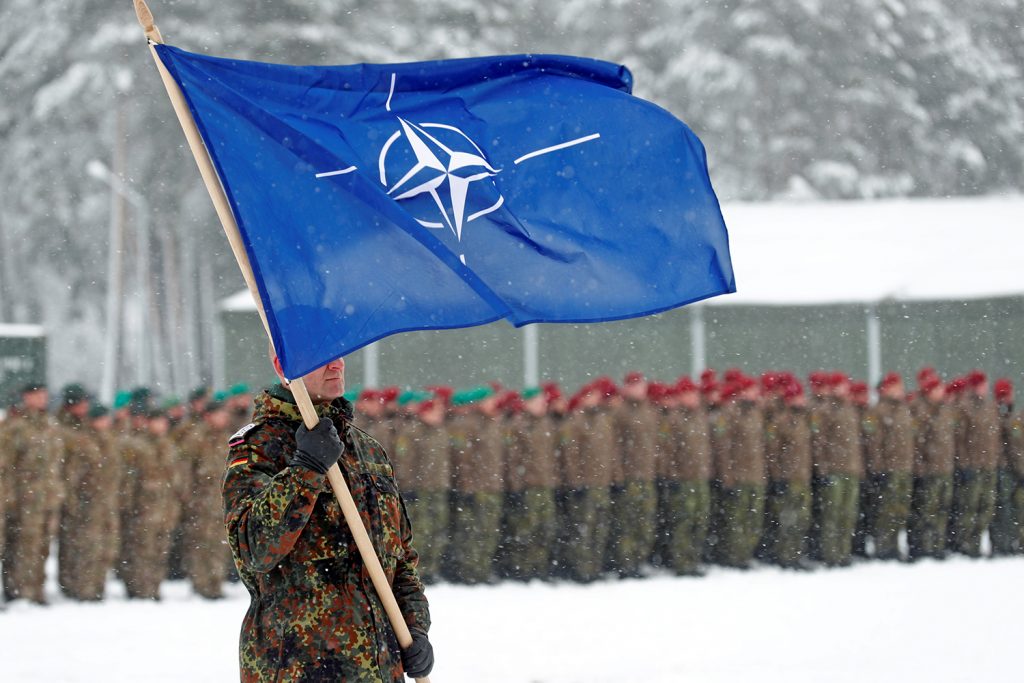 Seventy years after NATO’s birth, the Alliance is still confronting an existential threat to its east, several defense and foreign affairs ministers said on December 3. Although French President Emmanuel Macron has made waves by suggesting that terrorism, not Russia, was the biggest threat facing NATO today, the defense ministers from Estonia and Lithuania were clear that they still see Moscow as their biggest challenge.

“Russia has shown with its actions that it is a serious security threat,” Estonian defense minister Jüri Luik said during a panel discussion on Baltic and Black sea security during the NATO engages event in London on December 3. “For Lithuania, [Russia] is the only external existential threat we have,” added Lithuanian defense minister Raimundas Karoblis. While Macron has a legitimate concern in preventing terrorism in Europe, Luik argued that unlike terrorism, “Russia is the existential threat” because “it is a nation state.” NATO, he added, is “the only organization that can viably” deter Russian aggression against its neighbors.

Both ministers praised NATO’s efforts to protect the Baltic states from Russian attack and show Moscow that the Alliance would not leave them undefended. “Lithuania has never had such a great number of guarantees and allies as we have now,” Karoblis said. Luik warned, however, that persistence is key to staving off Russian aggression. “If we are serious in our actions, if we are clear and concise in our messaging, then the threat is quite low,” he explained. “But if we are weak, if we are wobbly, then the threat can go up.”

Both Karoblis and Luik suggested that NATO needs to do more to shore up its Baltic defense, including larger exercises to show “how we bring in additional troops if they are necessary,” as Luik suggested. Karoblis highlighted the need for “more precise defense planning,” a wish that has become controversial after a reported Turkish attempt to block new military plans for the Baltics and Poland until NATO recognizes Syrian Kurdish groups as terrorist organizations.

Despite the supposed Turkish opposition, neither Luik nor Karoblis were concerned that the proposed plans would be blocked more than temporarily. “The discussions are going on all the time,” Luik explained, adding that “if we don’t find a compromise here, we hopefully will find it a bit later. But I am absolutely sure we will find a compromise.” Karoblis promised “we will find a solution to this.”

But while the Baltics may remain firmly in NATO’s sights, Romania’s defense minister Nicolae Ciuca warned that the Black Sea region, the other vital part of the Alliance’s eastern flank, needs to be accounted for as well. “NATO and the EU need to have a very coherent approach to the whole flank,” rather than just tailoring solutions to either the Baltics or the Black Sea, he argued. In the latter especially, he continued, “we need to focus on strengthening the NATO and EU presence and NATO and EU cooperation in order to support the partnership countries,” such as Georgia and Ukraine, who have both faced invasion by Moscow in the last decade.

“Whether you like it or not, we defend your eastern flank,” Ukrainian foreign minister Vadym Prystaiko told the crowd in London, warning that the growing number of priorities for NATO in the Baltics and the Southern flank are causing the region to “believe that we are being left alone” despite being under daily pressure from Moscow. Georgian foreign minister David Zalkaliani agreed that the region must be one of importance for NATO because “without a secure Black Sea, there will be no security in the Euro Atlantic security space.”

Zalkaliani particularly lamented the failure of NATO leaders to approve the accession of either Ukraine or Georgia to NATO despite pledging to do so at the 2008 NATO Summit. Despite the prolonged wait, “Georgia is already acting like an ally,” Zalkaliani explained, as his country has met the 2 percent of GDP defense spending goal and has contributed troops to NATO missions in Afghanistan and Europe.

“When a country like Georgia delivers it has to be reciprocated,” he argued. Prystaiko agreed, noting that the “indecisiveness” of NATO since the 2008 promise has given Moscow the greenlight to attack both countries. Russian President Vladimir Putin, Prystaiko argued, can only be deterred through the strength of NATO. “He still appreciates and respects the mightiness of the Alliance. That is actually the only language which Putin understands.”