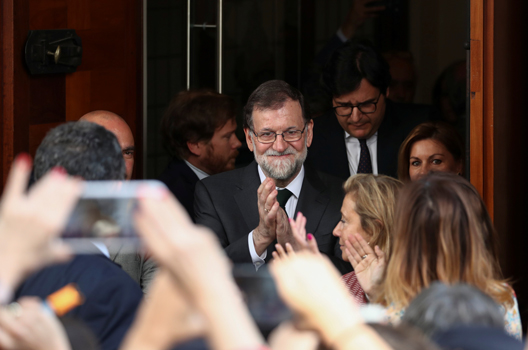 French President Emmanuel Macron could soon find an ally in Madrid. Just as Italy installs a government that opposes his proposals for closer integration within the European Union (EU), the most pro-European party in Spain could be on the verge of leading the next government.

Spain is due to have early elections after parliament removed Mariano Rajoy, the conservative party leader, from the post of prime minister on June 1. Pedro Sánchez of the Socialist Party will take his place. Sánchez called the vote after dozens of members of Rajoy’s People’s Party were convicted in a corruption scandal. However, it is the liberal Ciudadanos (Citizens) who stand to gain the most. Ciudadanos has 24-28 percent support in the polls, which would make it the largest party in Spain. Support for the Socialists is virtually unchanged from the last election in 2016 at 20-23 percent. The People’s Party has fallen from 33 to 18-23 percent. The far-left party Podemos (We Can) is at 16-19 percent.

Pro-market, the Ciudadanos propped up Rajoy’s business-friendly government, but the party’s anti-corruption and pro-European views align more closely with the left’s. It supports lower taxes as well as more transparent funding of political parties, more liberal immigration laws, and federation in Europe.

The Ciudadanos and Socialists tried to form a government after the inconclusive election of 2015, but they couldn’t get a majority at the time. Sánchez is unlikely to explore another pact right away. He won the June 1 no-confidence vote with the support of separatist parties from Catalonia and the Ciudadanos takes a hard line against the Catalan independence movement. Rajoy refused to negotiate on expanded autonomy with the Catalans, but the Ciudadanos still accused him of being too soft.

Sánchez has hinted at a new constitutional settlement, but he also backed the seven-month suspension of Catalan home rule following an independence referendum in October that had been ruled illegal by Spain’s highest court. The Catalans are glad to see the back of Rajoy, who was deeply unpopular in the region, but they aren’t exactly cheering for Sánchez.

The change in government comes at a time when Italy is getting a new government of its own. The two could hardly be more different. Italy’s Five Star Movement and League have at times called for quitting the euro. The Five Star once suggested leaving NATO as well. The parties are sympathetic to Russian President Vladimir Putin. Neither is in favor of freer trade.

When the euro was introduced, high-debt Italy insisted on bending the rules in order to get in. It could not stand the humiliation of being outpaced by its Mediterranean counterpart. Twenty years later, that is what has happened. Spaniards are now richer than Italians. Spain’s GDP per capita last year for the first time exceeded Italy’s on a purchasing power parity basis. In absolute terms, Spain’s economy is projected to nearly rival Italy’s in five years’ time. This week’s political upheaval may accelerate those trends.