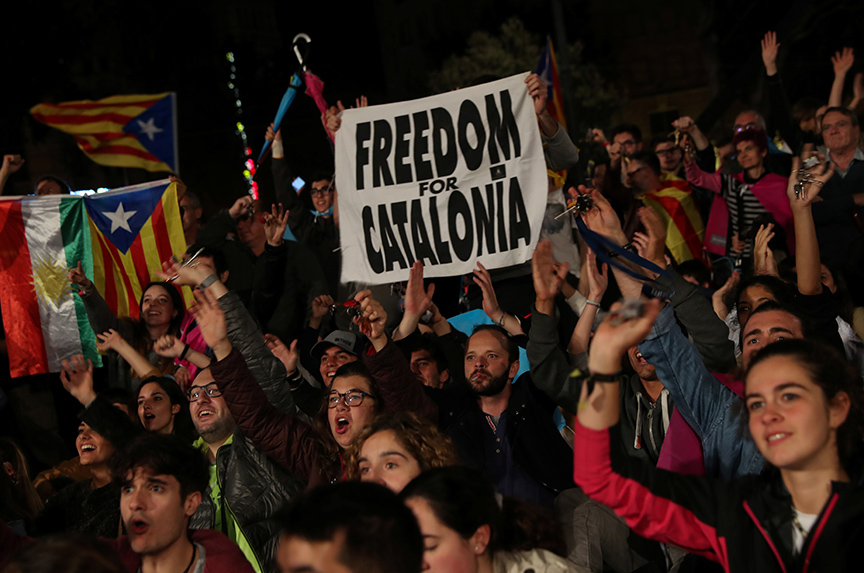 Catalonia would lose membership of the European Union (EU) if it were to declare independence from Spain—a development that would have serious economic consequences for this affluent region, according to the Atlantic Council’s Fran Burwell.

“That means barriers will go up immediately; no free movement for people who have Catalan passports; no free movement of goods of services to and from Catalonia; their relationship with the euro will be suspect, like Kosovo which uses the euro with no legal power to do so; there would be no common agricultural policy money for Catalonia,” said Burwell, painting a dire scenario that, she believes, has not been given adequate consideration in the Catalan people’s headlong rush toward independence.

Noting that she has never seen a poll that shows Catalans want to leave the EU, Burwell, a distinguished fellow at the Atlantic Council, added: “The fact that we did not have a debate about what this actually means is, I think, a bad thing. It’s just this dream of independence that’s out there without actually thinking what it would entail.”

On October 1, Catalans took part in an independence referendum. Spain’s constitutional court had declared the referendum illegal and Madrid deployed police to prevent it from taking place. In the crackdown that followed, almost 900 people were wounded.

Burwell said that while Spanish Prime Minister Mariano Rajoy’s government was right to view the referendum as unconstitutional, its heavy-handed response risks playing “right into the arguments of the Catalan independence leadership.”

On October 2, Catalan leader Carles Puigdemont, who has said he would present the referendum’s result to the regional parliament to make it binding, said he does not want a “traumatic break” with Spain.

The Catalan government claims that almost 90 percent of around 2.3 million people who participated in the referendum voted in favor of independence. There are around 5.3 million registered voters in Catalonia.

Fran Burwell spoke in a phone interview with the New Atlanticist’s Ashish Kumar Sen. Here are excerpts from our interview.

Q: Why do Catalans want independence?

Burwell: Spain is a very autonomous country. All of its regions are relatively much more autonomous than other areas in Europe. There has been a tradition of the different regions having their own political personality. With Catalonia, that has increased in recent years. They do have their own language and there has traditionally been some Catalan nationalism. There was a lot of frustration during the eurozone financial crisis because Catalonia is one of the richer areas of Spain, if not the richest, and they felt that they were sending money to Madrid which was spending it in less well-off regions of the country to get out of the financial crisis.

Then you have a combination of a series of politicians who feel that they can succeed politically by arguing for a secessionist agenda.

Q: To what extent was the referendum on October 1 the effect of a regional government bowing to pressure from its far-left allies?

Burwell: It has now spread far beyond the far left. This is not just an extremist thing; it has captured the imagination. We also have an issue that in the lead up to this referendum, the Russians were involved in spreading fake news on social media to further the independence movement. You have a variety of actors that need to be balanced.

Q: How extensive was the role played by Russia?

Burwell: We don’t really know. There were some bots, but I don’t know if there was any funding from the Russians, as was the case with the [far-right] Alternative for Deutschland (AfD) in Germany.

Q: What are your thoughts on the voter turnout? Is the police crackdown likely to play into the hands of the separatists by building support for independence?

Burwell: The Catalan government is claiming that over 90 percent of those who took part in the referendum voted in favor of independence. That was 2.2 million voters, they say, out of 5.3 million eligible voters.

In part because of the opposition of the Spanish government, this was not an election with a lot of rigor. You could print out a ballot paper, show up at a balloting place, not be on the rolls but still get to vote. It is not as though really high standards of voter integrity were being observed. But that is also in part because this referendum was being conducted in opposition to the wishes of the central government.

There was little voter turnout, but not miniscule with, we think, an overwhelming result for independence. That was largely as expected.

The more important element was the specter of violence that we saw with the police sent by the federal government trying to physically close voting locations and sometimes eject with very strong force people who were trying to keep those voting stations open.

A lot of us expected some violence, but this was much more than we thought there would be. Although the Rajoy government was undoubtedly correct in the legal sense that this referendum was unconstitutional, by sending the police they really made people who might have been on the fence on independence see Madrid as very heavy-handed. That plays right into the arguments of the Catalan independence leadership.

Q: What are the implications of independence for Catalonia?

Burwell: Independence has some very serious ramifications for Catalonia. In my view, those are not being discussed at all. Those have to do with the European Union.

If Catalonia were to leave Spain it would effectively leave the European Union and they would not get back in because Spain has a veto. That means barriers will go up immediately; no free movement for people who have Catalan passports; no free movement of goods of services from Catalonia; their relationship with the euro will be suspect, like Kosovo which uses the euro with no legal power to do so; there would be no common agricultural policy money for Catalonia.

I have never seen a poll that shows anything except that Catalans want to stay in the EU. The fact that we did not have a debate about what this actually means is, I think, a bad thing. It’s just this dream of independence that’s out there without actually thinking what it would entail.

It does seem that the Catalan leadership has now stepped back a bit. They have said they do not want a “traumatic break” with Spain. No one knows quite what that means.

Madrid has offered, off and on, discussions that could lead to even greater autonomy for Catalonia. That could be a way forward, but whether you could go forward in that direction and have a constructive dialogue after the vote and after the violence, I am not sure.

If I were Madrid, I would find it very difficult to have such a negotiation that left the same Catalan leaders in power who pushed for the referendum.

Q: What happens if the Catalans present the results of this referendum to their parliament?

Burwell: If they try and declare independence, I would suspect we would see a very strong stance from Madrid. The good news, sort of, is that the Catalan leadership seems to be pulling back from the brink. Whether that will last and whether it is enough to start a dialogue with Madrid, I don’t know.

Q: Earlier you mentioned how Catalan leaders take up the cause for independence as a way to boost their political careers. If they were to back down after this referendum are they putting their careers on the line?

Burwell: That is an issue. If I were Madrid and going into negotiations about enhancing autonomy in the future, one of the things I would want to do is to ensure that those people  who in Madrid’s eyes orchestrated an illegal and unconstitutional referendum are not in leadership positions. These individuals would have to sacrifice their careers in order to come to some sort of a result. We don’t know if that is what Spain would say, but I can certainly imagine that, and that would be a very tough choice for [the Catalan leaders].

Q: What are the implications of this development for the government in Madrid?

Burwell: The government in Madrid is doing very, very well. They have done well in terms of economy. Spain is now one of the faster growing economies in Europe. It has recovered, for the most part, from the financial crisis.

The violence is a big blot on the government’s record. In their strategy, they have probably added, unfortunately, to polarization in Spanish politics rather than the other way around. That said, Spanish politics are usually pretty usually polarized. Politicians from different parties don’t get on that well and the arguments sometimes devolve into personal attacks.

We have seen in Spain a growing disenchantment among the population as a whole with established political parties. You saw that over the last two years with a vote that did not give Rajoy enough backing to make it into government. Spain had a technocratic government for a long time. Finally, he had another vote where he squeaked by and had enough support with other parties to form a government.

If you’re a Spanish voter you’re thinking, “These politicians, they always mess it up!” And now you have this [the situation in Catalonia]. You might now see even more dissatisfaction with the political parties.

Q: Is there any support in the international community for Catalan independence?

Burwell: Officially, no. The EU has been very consistent in saying that this is a domestic Spanish issue and they are not going to get involved.

Image: People gathered at Plaza Catalunya in Barcelona, Spain, on October 1 after taking part in a referendum in which a majority of the voters voted in favor of independence for Catalonia. (Reuters/Susana Vera)