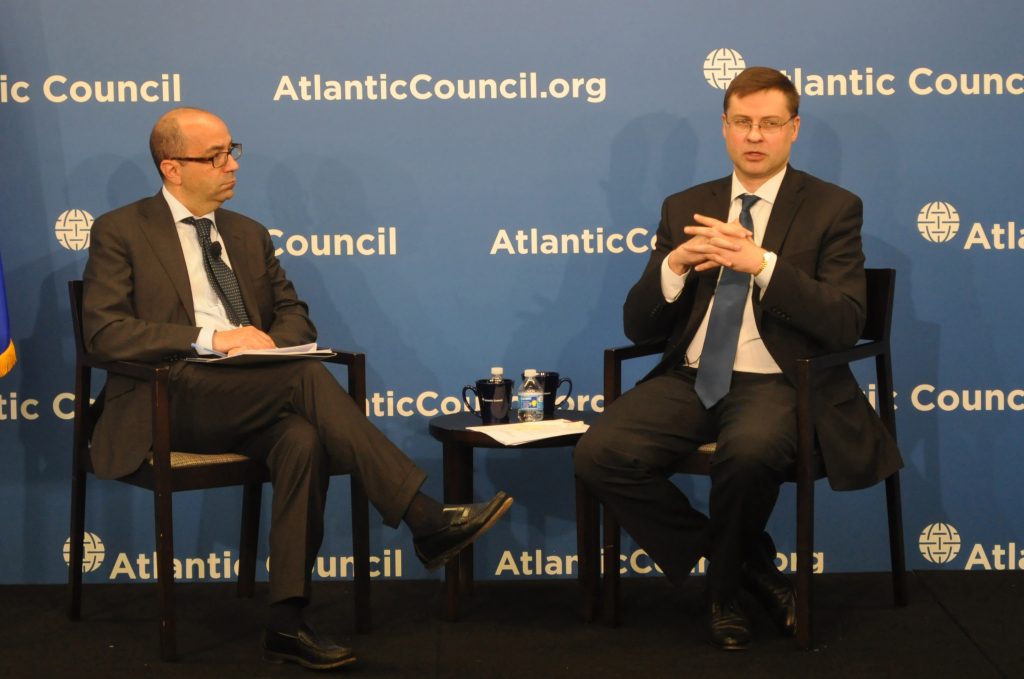 The European economy is slowly recovering from a double-dip recession aided in part by falling oil prices and a $1.2 trillion bond-buying program by the European Central Bank (ECB), a senior European Commission official said April 16.

“We are seeing the European economy gradually recovering; we are seeing the recovery is actually strengthening; and we believe we have the right policy mix with boosting investments, renewed forms of structural reforms, and fiscally responsible policies,” Valdis Dombrovskis, the European Commission’s Vice President for the Euro and Social Dialogue, said at a meeting hosted by the Atlantic Council’s Global Business and Economics Program.

Economic recovery and job creation have been slow, he said, but growth is gradually accelerating.

Earlier this year, the ECB started its bond-buying program, known as Quantitative Easing, in an effort to inject money into the economy, thereby reducing interest rates and encouraging borrowing and spending.

Dombrovskis, a former Prime Minister of Latvia, said economic growth in the euro zone is expected to reach 1.3 percent this year, climbing to 1.9 percent in 2016.

Investment is lagging in Europe not because of the lack of market liquidity, but because of a “very strong risk averseness,” he said, noting that the right policy mix for Europe’s economy must include an investment plan, structural reforms, and fiscal discipline.

Greece’s economic problems have cast a shadow across Europe.

Greece met its April 9 deadline to repay $494 million—part of its International Monetary Fund (IMF) loan. However, Greek authorities have yet to work out a deal with officials from the so-called trifecta—the European Union, the ECB, and the IMF—to keep its economy afloat.

Progress in these negotiations has been “limited,” said Dombrovskis.

“More work needs to be done, and really for this program to be successfully completed all sides must stick with their commitments,” he said. “There has to be good progress in closing the current program before there can be meaningful negotiations on the follow-up arrangements.”

In an April 9 address at the Atlantic Council, IMF Managing Director Christine Lagarde said Greek authorities have to sit down with officials from the trifecta and “focus on the objective of what is intended for the better for Greece, which is restoring the economy, stabilizing it, and by so doing re-establishing and reinforcing the sovereignty of the country.”

Finance ministers from the 18-nation euro zone will weigh in on the Greek government’s reforms package when they meet April 24 in the Latvian capital, Riga.

“It’s really a question of whether the new Greek government is taking up its responsibilities and actually delivering on these, because the fundamentals are now allowing the Greek economy to recover,” he added.

The recession in Europe revealed shortcomings in the EU’s institutional architecture, said Dombrovskis.

The EU has taken several steps to address these shortcomings, including strengthening of the fiscal and macroeconomic governance framework by the introduction of the European semester. Under the European semester, the EC reviews the budgetary and macroeconomic policies of EU member states. It can intervene and, in extreme cases, impose sanctions on states that don’t follow the rules.

Another step—the creation of a temporary European Financial Stability Fund—is being replaced by permanent European financial stability mechanisms. “There is some fallback in case member states run into difficulties as was the case with a number of member states during the crisis,” said Dombrovskis.

Andrea Montanino, Director of the Atlantic Council’s Global Business and Economics Program, asked Dombrovskis how he would convince US investors to participate in the “Juncker plan” that aims to spur growth in Europe.

Dombrovskis replied that Europe is still the world’s biggest single market and the Juncker plan provides incentives for private businesses to invest.

“It is a good opportunity to come to the world’s biggest market of 500 million consumers,” he said.

Image: “We are seeing the European economy gradually recovering; we are seeing the recovery is actually strengthening; and we believe we have the right policy mix with boosting investments, renewed forms of structural reforms, and fiscally responsible policies,” Valdis Dombrovskis (right), Vice President for the Euro and Social Dialogue at the European Commission, said April 16 at the Atlantic Council. Andrea Montanino (left), Director of the Atlantic Council’s Global Business and Economics Program, moderated the discussion.