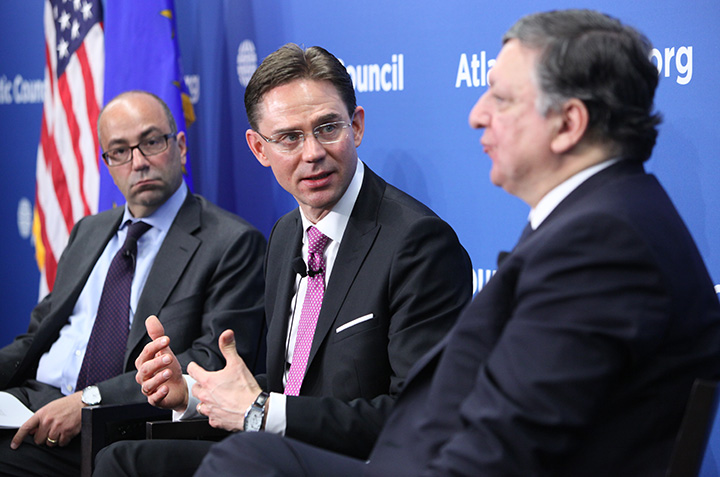 From left: Andrea Montanino, Director of the Atlantic Council’s Global Business and Economics Program, moderated a discussion with Jyrki Katainen, Vice President for Jobs, Growth, Investment, and Competitiveness at the European Commission, and José Manuel Barroso, a former President of the European Commission, in Washington on March 2. (Atlantic Council/Victoria Langton)

Trade deal would ‘help to write the rules of the global economy in the twenty-first century,’ says European Commission Vice President Jyrki Katainen

A transatlantic trade deal, currently being negotiated by the United States and Europe, would strengthen bonds and stimulate growth on both sides of the Atlantic, a senior European official said at the Atlantic Council on March 2.

US and European negotiators hope to secure an agreement on the Transatlantic Trade and Investment Partnership (TTIP) by the end of the year.

Noting that around fifteen million jobs are linked to the transatlantic economy, Jyrki Katainen, Vice President for Jobs, Growth, Investment, and Competitiveness at the European Commission, said: “TTIP will give us the chance to take that to a whole new level and provide a further boost to our recovery.”

“We can make deals that work for us both and help to write the rules of the global economy in the twenty-first century,” he added.

Katainen was scheduled to meet US Trade Representative Michael Froman, the lead US negotiator in the TTIP negotiations, while in Washington.

“A fair and balanced TTIP will strengthen our economies without compromising on any of the high standards our citizens expect,” said Katainen. “TTIP would be the cheapest way to stimulate economic growth on both sides of the Atlantic, but it will also strengthen the union by showing what we can do when we work together.”

Katainen spoke at at the launch of the Global Business and Economics program’s EuroGrowth Initiative at the Atlantic Council in Washington. Stuart Eizenstat, a former US Ambassador to the European Union, and José Manuel Barroso, a former President of the European Commission, are co-chairs of the Initiative.

Katainen was joined by Barroso in a panel discussion, which was moderated by Andrea Montanino, Director of the Atlantic Council’s Global Business and Economics program.

Eizenstat described TTIP as a “deficit-free growth strategy” and said that there is “real interest” in the Obama administration and the European Union to complete a framework for the agreement by the time US President Barack Obama leaves office in January of 2017.

“It is critical that we establish European and US standards for products, not Chinese standards,” said Eizenstat. “TTIP would serve as an economic NATO: a new alliance together shaping the rules of global trade.”

Critics of TTIP contend that it would weaken environmental and consumer standards, and give companies too much power to sue governments.

It is “crystal clear” that Europe has to be united to face the huge challenges of the day, including terrorism, migration, climate change, and economic issues, said Katainen, a former Prime Minister of Finland. “That is why there is strong widespread support everywhere in Europe for further integration of Europe,” he said.

The European Commission has set out ten priorities to address some of these challenges over the next five years. Boosting job growth tops the list. A Commission plan to get capital moving so companies can create new jobs rests on three pillars—first, the so-called Juncker Plan, named for European Commission President Jean-Claude Juncker, which will provide loans or equity to high-risk private sector investment with the aim of mobilizing private liquidity in the market; second, an online portal, which Katainen described as “a dating agency for investment,” that will connect projects with financing; and third, creating an investor-friendly environment by cutting back on unnecessary regulation.

Barroso made a strong case for the need for more reforms in Europe, specifically for a digital single market. “The name of the game in Europe today is reform,” he said. “We need to do more to promote the reform for a more competitive Europe at the national level.”

Is Europe still a global power?

Montanino asked Barroso whether he believed that Europe is still a global power despite the multiple challenges it faces, particularly the migrant crisis and a looming June 23 British referendum on whether the United Kingdom will remain in the European Union.

Barroso noted the “intellectual glamor of pessimism” on Europe’s future that prevails not just in the United States, but also in Europe. “In reality…there is no reason for this fatalist view on Europe,” he said.

On Barroso’s watch as President of the European Commission, the European Union grew from fifteen member states to twenty-eight. Countries like the United States and China now treat Europe with greater respect, he said.

However, Barroso acknowledged that Europe faces a challenge of low growth and, politically, two big problems—first, how to deal with the rise of populism, nationalism, and xenophobic sentiment, and second, the prospect of the United Kingdom leaving the European Union. If the United Kingdom were to leave the EU it would “be a blow in terms of security and common geopolitical interests with the United States,” he said.

Barroso called for greater “complicity” between the United States and Europe. This can be achieved through a multistakeholder commission that represents the private sector, he said.

British Prime Minister David Cameron reached an agreement with Brussels in February that rewrites the United Kingdom’s relationship with the EU, including an exemption from a requirement to seek an “ever closer union.”

Montanino asked the panelists if this sets a precedent for countries that are reluctant to continue with integration. “It seems to me now that we are not moving toward a two-speed Europe where everybody has the same endpoint,” said Montanino. “Probably we are moving toward a system where you have a core group of countries and another group of countries, so the endpoint can be different.”

Katainen said a fair deal was negotiated with the United Kingdom, “and it was also fair to the other twenty-seven member states.”

Europe today is grappling with a historic migration of people at numbers last seen during the World War II. While some countries—like Germany—have been more welcoming to the migrants, others, like Hungary, have shut their borders and built fences to keep them out.

Barroso defined the migrant challenge as the most important one facing Europe since the end of the Cold War and the beginning of European integration. Migrants need to be integrated into host societies and the private sector on both sides of the Atlantic should be recruited to help in this effort, he said.

A failure to find a solution to this problem will result in a “backlash against European integration, against globalization in general,” he warned.