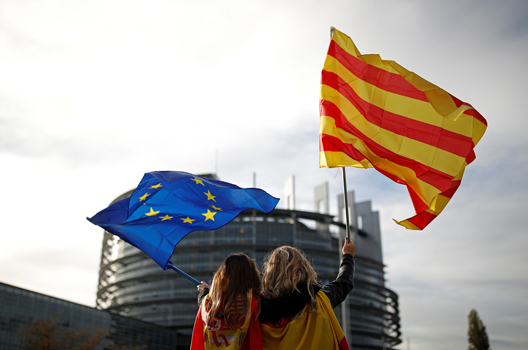 The time has come for the European Union (EU) to push for a peaceful resolution to the standoff between Madrid and the Catalan separatists. It is highly unlikely that that the separatists will passively acquiesce to the central government’s move to curb Catalan autonomy under Article 155—triggered by Spanish Prime Minister Mariano Rajoy’s cabinet on October 21—and the resulting scenario could involve much worse violence than was seen during the October 1 referendum. The EU must step in as a mediator, not to force its agenda on negotiations, but to maintain the peace and help restore credibility and trust between the sides. Otherwise, the Union risks the erosion of the values it purports to be built upon.

The EU thus far has tried its best to distance itself from the Catalan situation, with European Council President Donald Tusk saying there is “no space for an EU intervention.” The European Commission, German Chancellor Angela Merkel, French President Emmanuel Macron, and British Prime Minister Theresa May, among others, have sided with Rajoy in criticizing Catalonia’s decision to host a referendum which the Spanish constitutional court deemed unconstitutional. However, world leaders have essentially washed their hands of the crisis, saying it is an internal matter for Spain to resolve. Yet it has become abundantly clear that the two sides are at an impasse, with Catalan President Carles Puigdemont imploring Madrid for dialogue, and Rajoy refusing to hold talks until the separatists drop their independence ambitions. As a result, both sides, as well as the EU, have much to lose.

Should Catalonia pursue independence, the EU reiterated unequivocally that an independent Catalonia would find itself outside of the bloc. The separatists are attempting to claim a mandate for independence based on an unconstitutional and disorganized referendum. While over 90 percent of those who cast votes on October 1 were in favor of independence, less than half of eligible voters went to the polls. In addition to Brussels’ stipulation that it will not automatically accept an independent Catalonia into the Union, the two main banks in the region, as well as hundreds of other firms, began the process of moving their headquarters elsewhere in Spain.

As for the central government, it clearly mishandled the situation by deploying police who used excessive force to deter voters in the initial referendum, thereby squandering what was a decent political hand to play. Rajoy had the advantage of having the law and the constitution on his side, as well as the support of other major Spanish political parties. Instead of negotiating from a position of power while he had the chance, he let the animosity between Barcelona and Madrid fester, essentially ignoring the potential for conflict even after separatist parties voted in October 2016 to hold a binding referendum by the end of September 2017.

The EU, too, has much to lose from a failure to peacefully resolve the issue. Concerns regarding EU involvement in a member state’s domestic matter have their merit; however, the risks of an absentee mediator are greater, not solely because of the implications for the numerous regional independence movements within other member states. Images of Spanish authorities using violence against civilians, including women and the elderly, provided the perfect fodder for critics of the European project. These individuals were the only winners of the debacle. Euroskeptics claimed the EU’s response to Madrid’s actions displayed a double standard in favor of Western European member states, as opposed to others, such as Poland and Hungary, who are often ostracized for rule-of-law abuses. Serbian President Aleksandar Vucic criticized the EU for hypocrisy, contrasting its reaction to the Catalan referendum to its acceptance of Kosovo’s declaration of independence in 2008. Though this comparison is misplaced for many reasons, it nonetheless gained traction among those less concerned with details.

Finally, the entire situation has helped perhaps the EU’s main adversary—the Kremlin. One of Russian President Vladimir Putin’s go-to narratives is that the EU and United States are morally bankrupt and hypocritical. He argues that though these Western countries claim to be superior, they are morally equivalent to Russia, and thus cannot lecture others on issues such as human rights and international law. It is no accident that pro-Russian media systematically depicted the Spanish government and judicial system as violently repressive in the weeks before the referendum—and Putin went so far as to compare events in Catalonia to Russia’s 2014 annexation of Crimea.

The EU must quickly step up its efforts to find a peaceful solution to the standoff. The Catalan parliament will meet on October 26 to discuss next steps, while Spain’s Senate will vote to approve the Article 155 measures the next day. European Council President Donald Tusk recently called himself the “guardian of European unity” at the EU leaders’ summit. The activation of Article 155 will present a major test for this unity, and its potential consequences could be dire not just for Spain, but for the EU. There may still be room for a negotiated settlement—if Puigdemont drops ambitions for independence—with an arrangement including increased financial autonomy for Catalonia. Time, however, is running out—and politicians on all sides would not be serving their constituencies if they let the conflict escalate any further.

George Tsereteli is a Europe and Eurasia research associate at McLarty Associates. Follow him on Twitter @giotsereteli4. The views expressed in this blog post are the author’s own.

Image: Women waved European Union and Catalan flags during a gathering against Catalonia independence in front of the European Parliament in Strasbourg, France, October 24, 2017. (REUTERS/Christian Hartmann)