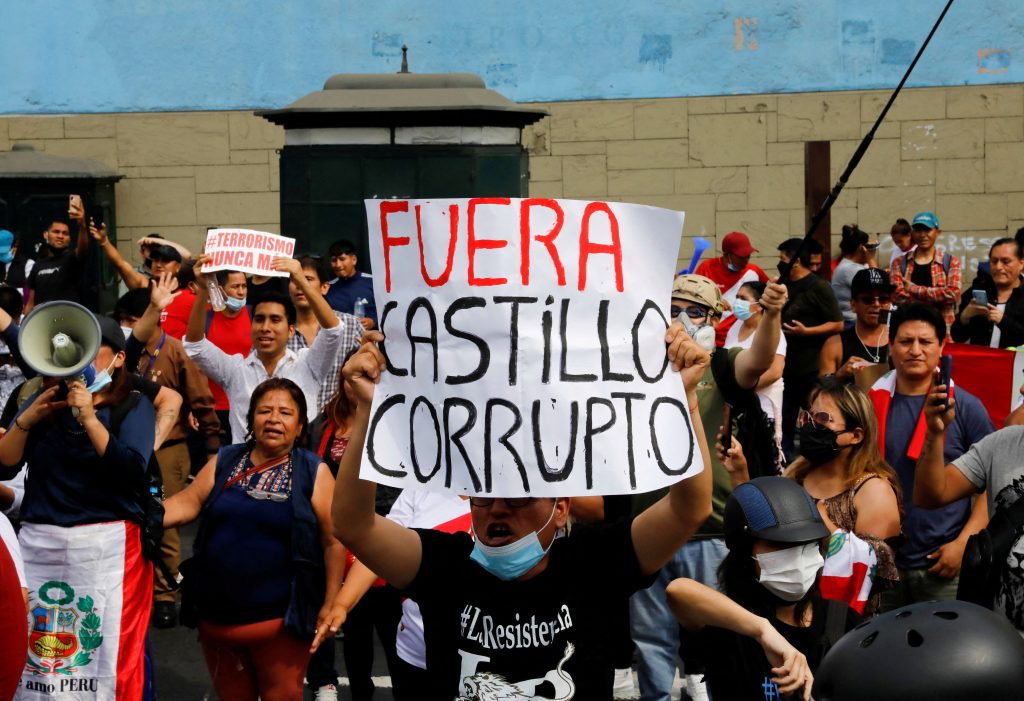 Peruvian President Pedro Castillo was removed from office by the country’s Congress on Wednesday, after he had announced a plan to dissolve Congress ahead of the impeachment vote. The judiciary, military, and police opposed the unpopular leftist president’s power grab, and Congress sent Castillo packing while elevating Vice President Dina Boluarte to the presidency. Castillo was later arrested.

Did the system succeed against a constitutional crisis? What’s next for the South American nation after the chaotic presidency of an untested political newcomer? Our Latin America experts break it all down.

Watch for more political uncertainty ahead

Castillo tried to play his hand today in the longstanding tradition of an autogolpe—a self-coup. His incompetence—seen throughout the chaos of his one and a half years as president—made it clear that he was not going to succeed. The rural teacher turned union leader also could not count on popular support, with an approval rating of just 19 percent in some cities. The ill-thought-out move to attempt to dissolve Congress rather than let Congress consider an impeachment motion against him thankfully backfired—symbolic of his short-lived presidency.

What else was part of the recipe for maintaining democratic order? The military and police vocally warning Castillo not to make his move, ministers resigning in the wake of his announcement, and Congress moving up its impeachment vote (which passed with the support of 101 of 130 legislators). Reaction from the region was tepid. Brazil’s president-elect, Luiz Inácio Lula da Silva, called the actions today “regrettable,” while Mexican President Andrés Manuel López Obrador blamed Peru’s elite, saying their hostility toward Castillo led resulted in “an environment of confrontation and hostility has been maintained against him.” Colombia’s government said it “condemns any attack against democracy.”

Peru has been embroiled in political chaos for quite some time. It took four presidents to complete the last presidential term (from 2016 to 2021), and Peru is now on to its second president, its first female president, in this current five-year term. The fractious relationship between Congress and the president—and the ease with which Congress can call for impeachment—are some of the factors leading to such political uncertainty. Add to that the need for a revamping of a political structure that has lost the confidence of many Peruvians especially when many of its leaders are seen as corrupt.

The ending of Castillo’s presidency was not totally surprising. His way of governing always gave a sense of improvisation and lack of planning.

Besides the obvious problems of widespread corruption scandals that plagued his government, one of the main issues was a nonworking government apparatus and a total lack of a strategic approach to find solutions to the country’s many problems.

At the same time, Castillo’s everyday confrontations with Congress drained the energy that could have been used to promote initiatives and to advance the policy changes promised during the electoral campaign. The result was an increasing and all-consuming confrontation with the parliamentarians and, in recent days, with the judiciary, the attorney general, and the constitutional court. A byproduct of that: accelerating decline in his popular support, even in the regions more prone to support him in the country’s south.

The recent avalanche of corruption allegations involving the president and his family and the increasing support for the impeachment process in Congress resulted in Castillo’s attempt to take absolute power, close the Congress, and reform the judiciary. But this once again amateurishly improvised attempt failed and resulted with Castillo in jail.

—Hugo de Zela served as Peru’s vice minister of foreign affairs from 2018 to 2019 and as Peru’s ambassador to the United States from 2019 to 2021. He has frequently spoken at the Atlantic Council.

Peru is a dysfunctional democracy in which a coup was, for a short time, a plausible option given the precarious situation of the president who had lost the support of his parliamentary group and was only sheltered by a part of the opposition. However on this occasion, the Congress, a usual source of instability, has managed to save the situation. An impeachment with 101 votes in favor removed Castillo from power, and he was promptly detained. The presidency has been assumed by his vice president, Dina Boluarte.

Castillo’s decision to dissolve Congress, which Boluarte called a coup, is absurd. He was incompetent in filling his role, and his presidency was tainted by high-level corruption scandals. The former president had been investigated by Peru’s attorney general regarding allegations of “influence peddling” and “collusion.” In addition to that, prosecutors opened other criminal investigations against Castillo, including one for possibly “obstructing justice.” The prosecutor’s office had even opened a constitutional complaint in Congress against Castillo to determine whether he committed crimes as president.

By dissolving Congress, instead of allowing the Congress to proceed with a motion to move forward with the impeachment vote, Castillo created the situation that would end up, in a few hours, with him detained by security forces and taken to a police station. He did it alone; no one accompanied him in his most recent anti-democratic drift, not his cabinet, not the army, and not his supporters. For Peru, this is just another episode in a dramatic trend of political instability and institutional degradation. Nine out of the ten Peruvian presidents of the last three decades have ended up accused of corruption. The economy grows, but the country remains socially broken.

—Érika Rodríguez is a nonresident senior fellow at the Adrienne Arsht Latin America Center, a member of the Center’s Venezuela Working Group, and a special advisor for Latin American affairs to the high representative and vice president of the European Commission.

An unfortunate new low for Peru

After inaugurating four presidents in less than a year, Peru has reached an unfortunate new low in its political and institutional crisis. Castillo’s unilateral move to dissolve Congress received no support—a silver lining in the tragic denouement of Castillo’s short and unpopular sixteen-month administration. The initial reactions and condemnations of today’s actions in Peru from former cabinet members and other key actors is also a good omen for the democratic outlook of the country. Immediately, however, the constitutional crisis that the former president has unleashed will likely exacerbate longstanding political fatigue and social unrest in the country. The hours following are crucial and will determine whether trust in Congress and the country’s institutions will strengthen or erode. These institutions, with the support of the international community—including the business sector—have an important role in helping Boluarte navigate the next chapter of Peru.

—María Fernanda Bozmoski is the deputy director of programs at the Adrienne Arsht Latin America Center.