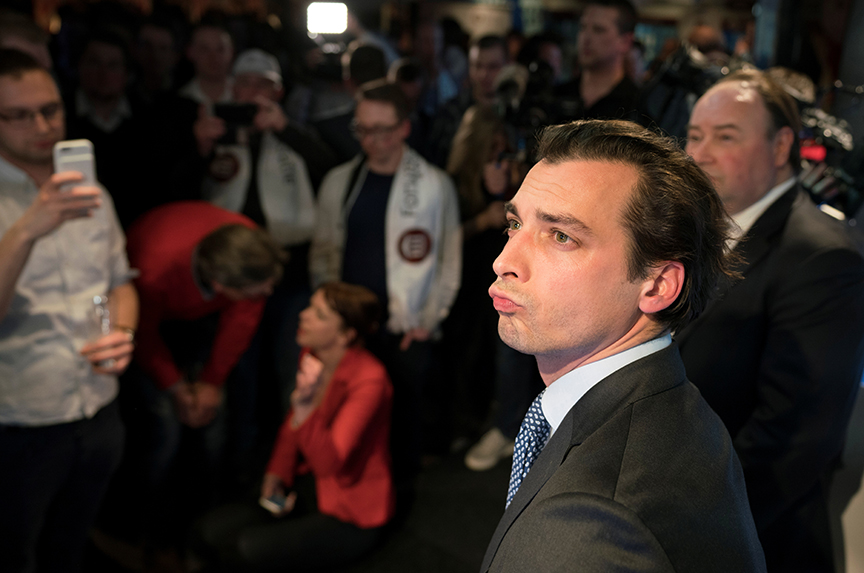 Far-right parties in the Netherlands posted their best result to date in midterm elections on March 20. The Party for Freedom (PVV) and Forum for Democracy took a combined 21 percent of the votes. Dutch Prime Minister Mark Rutte’s four-party coalition government is projected to lose its majority in the Senate.

It wasn’t all bad news for Rutte. His liberal People’s Party for Freedom and Democracy (VVD) still placed second and his government will not, as it feared, be completely dependent on the Greens in the new Senate. It should be able to do deals with the Labor Party and smaller parties on the center-right as well.

The result will probably be more compromise in the middle, but that could feed into a vicious circle: the more anti-establishment parties grow, the more parties in the center need to team up to govern the country, which lends credence to the far-right’s claim that all mainstream parties are the same. PVV leader Geert Wilders warned right-wing voters before the election that a vote for Rutte would be a vote for the Greens. Thierry Baudet of Forum for Democracy, which only entered parliament for the first time two years ago, claims the Netherlands is ruled by an unaccountable “party cartel.”

In the past, Rutte tried to reach out to far-right voters. His VVD once included the PVV in a coalition government. It adopted a harder line on immigration and (unsuccessfully) campaigned against a second bailout for Greece. The Christian Democratic CDA similarly moved to the right, campaigning, for example, for a more patriotic high-school curriculum. It didn’t persuade many voters to switch back to the center-right.

Rutte tried a different strategy this year, deliberately placing himself in a long Dutch tradition of consensus politics. On the eve of the March 20 election, when voters elected provincial deputies who will in turn elect a new Senate in May, he did a climate deal with the Greens that should see the Netherlands meet its obligations under the Paris Agreement. His campaign was centered on coalition-building and he criticized parties that create division and refuse to compromise. It allowed the VVD to offset its losses on the right with gains in the center. Among the biggest losers were Rutte’s allies in the socially progressive D66, which lost voters to both the VVD and the Greens.

The center-left Labor Party and far-left Socialists also lost, dealing another blow to European social democracy and throwing doubt on their electoral strategies. Both parties are traditionally composed of middle- and upper-class progressives on the one hand and lower-class working voters on the other, with Labor leaning in one direction and the Socialists in the other. Neither has been willing to make a choice between those constituencies even as their interests and values have diverged. University-educated progressives now prefer the more outspoken D66 and Greens, who are also unambiguously pro-European Union. Many working-class voters, who don’t experience the benefits of globalization but who have personally felt the effects of public-sector cuts and worry about the economic and social consequences of immigration, have defected to the far-right. Non-white voters, traditionally another left-wing bloc, have warmed to the minority-rights party Denk. Seniors can vote for 50Plus. Labor and the Socialists are left without a solid base.

Fragmentation is nothing new in Dutch politics. The country’s system of proportional representation doesn’t throw up many roadblocks in the way of newcomers. Some parties come and go. Others go up and down. In the end, the center tends to hold and policy outcomes are remarkably stable. Precisely because it now takes multiple parties across the two chambers of parliament to get things done, radical change is unlikely.

On the upside, the Dutch economy is in good shape and voters give high marks to their personal lives. Despite the far-right’s claims to the contrary, public services are of high quality. The Dutch health care system is considered the best in Europe. Few people live healthier and longer than the Dutch. The Dutch education system is ranked as the fifth– or eighth-best in the world.

When, on the heels of Trump’s victory, Rutte defeated the PVV in 2017, it looked like the Netherlands might have found the answer to right-wing populism. That is not the case. Wilders lost again on March 20, but Baudet is now tied with the VVD. On climate, multiculturalism, and Russia, he is even more alt-right than Wilders—and mainstream parties don’t know how to beat him.

Nick Ottens is a Dutch political analyst. He blogs at atlanticsentinel.com.

Image: Thierry Baudet of Forum for Democracy is seen in Amsterdam, the Netherlands, as election results come in on March 21. (Reuters/Cris Toala Olivares)