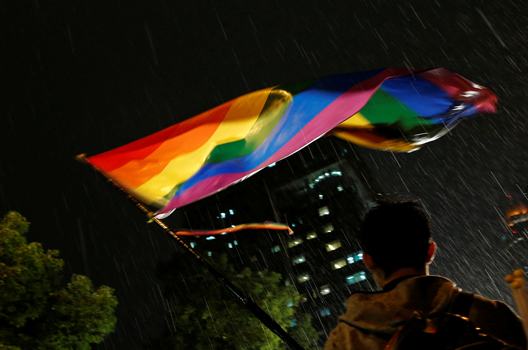 A supporter waves a rainbow flag during a rally after Taiwan's constitutional court ruled that same-sex couples have the right to legally marry, the first such ruling in Asia, in Taipei, Taiwan May 24, 2017. (REUTERS/Tyrone Siu)

With the revocation of the Edict of Nantes in 1685, Louis XIV famously empowered national prejudice, initiating widespread persecution and driving the mass exodus of French protestants. Many of those within this highly skilled and industrious group fled to London, where they had no small part in the blossoming of English economic life which would soon see the birth of industrialization and the forging of a global empire. Arrivals to Holland, Prussia, and America had similar impacts in those places. France, the undisputed Western superpower of the seventeenth century, would fade in relative geopolitical prominence. A global defeat in 1763 at British hands which ended the Seven Year’s War cemented France’s legacy as the perennial second fiddle of modern global power. A petty act of illiberal tribalism for political expediency had a real impact on the rise and fall of nations.

The story of the Huguenots is not an isolated one. The expulsion of Jews from Europe, South Asians from Africa, and many others propagated decline in the perpetrator countries—and usually brought significant economic and political gains to those countries that took in the expelled people.

In modern times, the experience of LGBTQ refugees provides glaring evidence that this trend endures.

Existing literature shows the cost of gay exclusion within societies. For example, a 2014 World Bank model found that workplace discrimination, the concentrated impact of HIV, suicide, and depression, cost companies billions of dollars every year—even if lacking data impedes precise quantification. It found that discrimination against gays in India, for example, created economic losses of about 0.1 percent to 1.4 percent of gross domestic product (GDP). Across emerging markets, there is a strong correlation between gay inclusion and both social and economic development. In developed countries, the internal movement of gay communities from intolerant backwaters to urban centers has driven the mythical “gaytrification.” Particularly when expressed gay identity was a whiter and more male phenomenon, part of that effect was due to the concentration of relatively privileged groups. Undoubtedly, lesbians and transgendered communities tend to fare worse than average—a cleavage exacerbated by overlapping discrimination particularly outside “gay ghettos.” However, as explained in George Florida’s The Rise of the Creative Class, evidence also points to creative and economic multiplier effects among LGBTQ communities, and to concurrent relative losses where those communities are unwelcome. Low-level discrimination can, therefore, cost countries as a whole, and also cost communities within countries due to internal displacement.

However, recent developments in Russia, the Muslim world, and Africa point to a newer phenomenon. Organized persecution of sexual minorities to the point of torture and death, together with recognition of that persecution as a reason for refugee status, and also technology-enabled grassroots organization among vulnerable gay communities (through web-based fora), have resulted in the organized movement of LGBTQ refugees. In the UK, the number of gay refugees has risen by 450 percent in the past five years. Statistics in the United States, France, Germany, and Scandinavia are comparable.

Like the Huguenots and Jews before them, these individuals are disproportionately economically valuable—sometimes because their other privileged status (male, educated) means they are at once more enabled and more targeted. However, it is also arguably because the act of processing the internal struggles of gay identity both reflects and builds personal fortitude and self-awareness, both of which are markers of economic potential.

The absence of data on the relative value of one refugee over another exists for a reason. By definition, refugee status is a humanitarian question, not a cynical one. At the same time, arguments for restrictive refugee policies are cynical themselves.

An Organization of Economic Cooperation and Development (OECD) study assessed the effect of immigrants on its members’ finances in 2007-09 to have been about +0.35 percent of GDP. That includes the brown, female, and gay ones. Yet the “4D” jobs (dirty, difficult, dangerous, and dull) tend not to be the gay metiers. Well, dangerous perhaps.

In the most “gay-friendly” countries, those figures of net gain from immigration are higher. LGBTQ immigration policy is more complicated, and intrinsically linked with gay marriage, to the extent that such immigration is particularly gay. Thar be cultural dragons.

Whether the Huguenots or German Jews (or Armenians or Irish) brought greater benefits to their new homes relative to other immigrants is not finally the point. Ultimately, in all those cases, the petty persecutors who expelled those marginal groups were by and large the losers—and the welcoming countries the winners in terms of economic benefit.

Better then to accept the best of the best, whether they be gay, straight, bisexual, transgendered, black, brown, polka-dotted, or from Mars. The alternatives are costly.