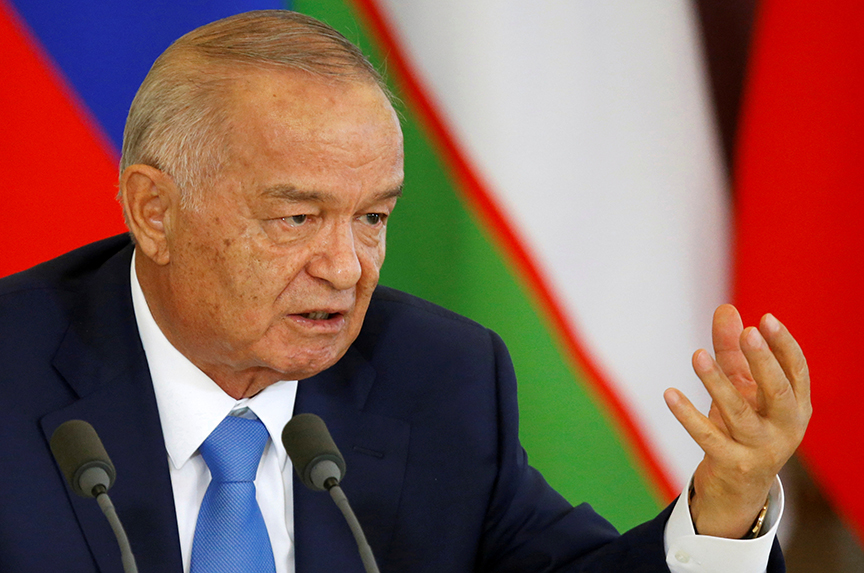 On September 1, Uzbekistan will celebrate its twenty-fifth anniversary of independence, but for the first time without its long-time president, Islam Abduganievich Karimov leading the dancing and music-filled celebrations in the capital Tashkent.

Karimov suffered a stroke on August 27 and it is most likely that the seventy-eight-year-old, who was already in poor health, has died or become so incapacitated that he will never lead Uzbekistan again. [Update: Turkish Prime Minister Binali Yildirim on September 2 said Karimov had died. There was no official confirmation of the news from Uzbekistan.] For the generations that have grown up since 1989, Karimov is the only leader they have ever known. To them the future is uncertain and insecure.

Several analysts have suggested that the succession is likely to be “controlled” and that either Prime Minister Shavkat Mirziyoyev or First Deputy Prime Minister and Finance Minister Rustam Azimov will be handed the reins of power. As mandated by the constitution, power may also transit via the head of the upper chamber of parliament—the little-known Nigmatulla Yuldashev. In any case, the feared head of the National Security Service (NSS), Rustam Inoyatov, is likely to remain a key kingmaker. The NSS has for several years been the most influential part of the state. The longer the wait for the announcement of the name of Uzbekistan’s next ruler, the greater the likelihood of infighting within the inner circle. This could undermine any smooth transition plans.

Karimov will be remembered as the most ruthless post-Soviet leader who presided over a deeply repressive state in which freedom of expression and belief was significantly curtailed. He never allowed an independent investigation into the massacre at Andijan where on May 13, 2005, Uzbek security forces killed hundreds of unarmed civilians. He let opposition politicians, human rights activists, and journalists, including Muhammad Bekjanov who has been in prison since 1999, rot in TB-infested jails. Perhaps the worse conditions were reserved for thousands of followers of Hizb-ut-Tahrir and other non-traditional Islamic movements who were arbitrarily arrested, forced into making false confessions, tortured, and sometimes killed for their religious activities and beliefs.

Karimov also allowed corruption to flourish, child and forced labor to become endemic in cotton fields, and the country’s farmers and workers to fall into poverty that forced many to become migrant labor abroad. Even though the World Bank notes that “Uzbekistan’s economy continues to grow at significant rates…the outlook for Uzbekistan remains positive,” there are few in Uzbekistan who say that their personal wealth has grown.

Uzbeks most often express support for Karimov because he has ensured “stability.” Compared to Tajikistan, which suffered a civil war from 1992 to 1997; Kyrgyzstan, which has had several violent changes of power; and Afghanistan, which has exported insecurity and narcotics beyond its borders, Uzbekistan looks like a stable place. As a regional leader of the official Women’s Committee told me last year, “Every day I thank President Karimov because I can go to sleep without worrying what will happen overnight.”

Now, for the first time in many years, Uzbeks are undoubtedly going to sleep worried. Tomorrow may bring to power a successor that Karimov handpicked, but that doesn’t mean that he will be able to ensure stability. Despite a tightly-controlled security regime, Uzbekistan is more diverse than Turkmenistan where controlled succession from long-ruling dictator Saparmurat Niyazov in 2006 to the current president, Gurbanguly Berdymukhamedov, succeeded in assuring continuity and little change. Uzbekistan’s regional clans are less powerful than soon after independence, but they still hold some sway over local economic matters. Elites in the Karakalpakstan autonomous republic and parts of the Fergana Valley have in past years murmured dissatisfaction with Tashkent. Their voices could become louder as they see the opportunity to test Karimov’s successor.

Relations between Uzbekistan and its neighbors, specifically Tajikistan and Kyrgyzstan, also remain tense due to disputes over land, water, and electricity. Karimov has been famously adept at playing Russia, the United States, and (to a lesser degree) China off each other. This foreign policy choreography will be difficult to replicate by a new leader who is not seen by outsiders as basically invincible.

In the 1990s, books with grand titles such as “Uzbekistan: The Road of Independence and Progress” and “Uzbekistan on the Threshold of the Twenty–First Century” were published under Karimov’s name. According to them the goal was to build a democratic state based on the rule of law with a strong civil society, open-market economy, and open foreign policy. This is not the legacy that Karimov is leaving behind.

The citizens of Uzbekistan and foreign observers have, for years, said Karimov was steering Uzbekistan in a positive direction albeit at his own pace and taking into consideration the country’s historical and cultural specificities. Karimov kept up the charade for a long time. But now his time is up and Uzbekistan is left without the mediating democratic state institutions, political parties, civil society organizations, private enterprises, and media through which people could channel their political and economic grievances. Karimov’s successor could quickly gain domestic and international support, including from the European Union and the United States, if he launched reforms that would allow these to develop. That is, however, unlikely.

Instead, Uzbekistan is likely to become much less stable. It will be a country in which people are less eager to pretend that they are enjoying their independence day festivities and more likely to go to bed worrying about an eruption of conflict.