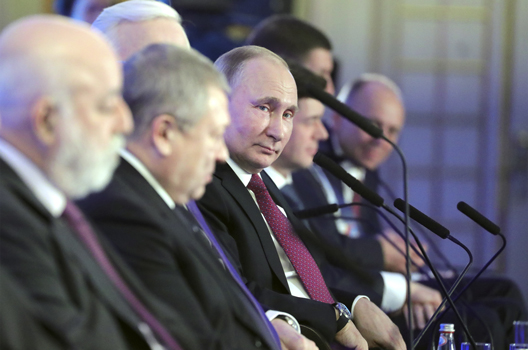 Russian President Vladimir Putin (C) attends a session during the Week of Russian Business, organized by the Russian Union of Industrialists and Entrepreneurs (RSPP), in Moscow, Russia February 9, 2018. (Sputnik/Mikhail Klimentyev/Kremlin via REUTERS)

Russian President Vladimir Putin’s re-election on March 18 is a foregone conclusion. Why, then, does this elaborately staged charade garner such attention abroad? Perhaps that is because the election is not important in itself as much as for the question it poses of what comes next.

This election’s importance resides not in its occurrence or in its sham legitimization of this regime. Its significance is that a “reelection” of Putin will extend the current stagnation within Russia well into the future and foreclose many other future alternatives. In many ways, it rejects the future.

Though there are opponents—such as Alexey Navalny—advocating a democratic process, they are empty threats to Putin and the world cannot count on a liberal revival within the Kremlin. Putin has extinguished the basis for any form of politics in Russia other than autocratic and bureaucratic maneuvering from above.

Putin’s next term may be a certainty, but the incessant Moscow rumor mill is abuzz with speculation that this is his last campaign, that he will introduce supposed reforms to reignite the stagnant economy, and that he will purge people who no longer can perform to his satisfaction.

Some of this may be true. Russian leaders’ disenchantment with long-standing colleagues is hardly a new story, especially as so many are kept on for the duration of a term merely to retain holdings that are under immense foreign and economic pressure. However, even if new, younger men and women appear on the political scene, the system’s fundamentals—authoritarianism, orthodoxy, and Russian state nationalism or imperialism—will not change and will likely calcify further. Putin has amply demonstrated that he will not initiate genuine reforms and the ruling caste will staunchly resist anything that endangers their privileges, power, and wealth. Other fundamental aspects of the regime: kleptocracy, growing repressiveness, and its unceasing propagation of a state of war will also likely grow stronger.

Overall, as a result of these defining and longstanding characteristics, Putin’s regime, even in its last term, is unlikely to introduce change.

For example, the Kremlin’s exhibition of a pervasive war psychosis will hinder any overtures to improve democratic ties abroad. Russia’s ongoing and destabilizing war with the West began not in 2014 with the invasion of Ukraine, but back in 2004-05 when Russia first tried to overthrow Ukraine’s government and failed. In that Ukraine crisis Moscow projected its own modus operandi of subversion by the Federal Security  FSB onto Western institutions. Because they therefore failed to subvert Ukraine and blamed Western institutions for thwarting them, and because they could not accept that they had authored their own defeats, leading officials subsequently concluded that Russia was in a non-kinetic conflict with Western democracies and their ideals, while portraying their own nation as under attack. From this point the Kremlin steadily moved to create a state of siege at home and abroad.

While the Russian government undermines foreign entities and has adopted an aggressive stance on the world stage, it increasingly fears its own people. This fear has resulted in a crackdown on civil society and any potential sources of opposition to the Kremlin. Russian security services have assumed virtually complete control over the Internet. Throughout the country, soldiers, civil servants, and applicants to the civil service must now account for three years of all publicly shared data. Further, soldiers are polled on their political affiliations.

Meanwhile, Putin has steadily expanded a domestic National Guard—its sole purpose is his personal defense—to enforce order alongside of regular and other irregular domestic forces. The projection of power abroad into Ukraine and Syria is now matched by the inward projection of power and control over the Russian people. Meanwhile, the economy stagnates and signs of socio-economic atrophy, if not breakdown, abound in the press.

Moreover, since Russia’s economic fortunes remain tied to the price of oil that is under global pressure from US shale, foreign producers, and the steadily declining price of renewables, a significant growth spurt to alleviate mounting socio-economic distress is quite unlikely.

If Putin launches “reforms,” they will likely be as unavailing as most of the Kremlin’s attempts to impose change from the top down, with only few exceptions. Putin’s next term will not be one of those exceptions. It will be clearly marked by steadily expanding police powers over the population and a continuation of aggression on the world stage.

Putin’s next term will likely oversee the continuation of Russian cyber interference into the functions and democratic processes of rival nations. Information war is relatively cheap and can be directed globally and as is now the case, from home. Manipulating these methods, Putin can maintain the fiction that Russia is a besieged fortress. Maintaining a repressive apparatus and new men, like the newly appointed regional governors or his current Chief of Staff Anton Vaino, who owe him everything, Putin can also preserve high defense and security spending while rearranging rents for a new group of kleptocrats.

While Putin’s show must—and will—go on, actuarial tables never lie and he and his cohort will eventually depart. The speculation that this is his last term and he wants to devise a mechanism for a successor is suspicious and unsupported by any evidence.  Indeed, Putin knows his legitimacy is clearly manufactured and that he is as much a prisoner of his system as are the members of his entourage. If Putin wishes to remain the arbiter of the competing elites, he cannot resign or signify his desire to do so because his power will fade immediately. Therefore, six more years of the same or worse policies are likely until the 2024 election.

After the death of Nicholas I, the tsar whose reign Putin’s most imitates, one of his most devoted civil servants, AV Nikitenko, opined: “The main failing of the reign of Nicholas Pavlovich was that it was all a mistake.” Nicholas’ stagnation left his heir no choice but to introduce great reforms that inaugurated the long period of volatility culminating in the epochal but failed revolutions of 1905 and 1917.  We should not be surprised if Putin’s successors become caught up in the same tide to save their own position and the state. One of Putin’s heroes—Peter Stolypin, a former Russian prime minister—reproved his rivals for wanting great upheavals while he sought a great Russia. Putin may still think he is building a great Russia, but instead he is paving the way for another great upheaval.