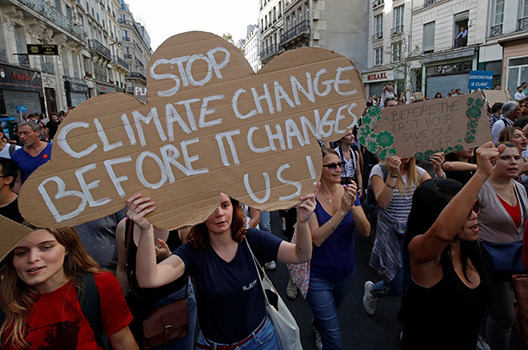 As the world’s economic and financial leaders gathered in Bali, Indonesia, last week, they were expected to scrutinize each other’s economic outcomes and policies against the backdrop of the International Monetary Fund’s reports on the world’s economic outlook (World Economic Outlook), the global financial situation (Global Financial Stability Report), and fiscal developments (Fiscal Monitor). These reports, which were prepared by teams of economists ahead of the annual meetings of the IMF and the World Bank, are intended to inform world leaders and the public at large about current economic developments, prospects, and risks.

Two other important announcements that week, however, should have grabbed policy makers’ attention and led to deeper thinking about possible policy options. On October 8, the Intergovernmental Panel on Climate Change (IPCC) published an update of its climate projections, highlighting how a number of climate change impacts could be avoided by limiting global warming to 1.5ºC compared to the 2ºC agreed to in Paris in 2015. That same day, William Nordhaus and Paul Romer received the Nobel prize in economics for their work on achieving sustainable economic growth.

The IMF reports largely took stock of the progress made since the global financial crisis, shedding light on the economic gains achieved, the uneven strength regained since then in different parts of the world, the remaining vulnerabilities, and highlighting the financial regulations that were put in place to prevent such events from recurring. The main message appears to be “by all means, let’s avoid a repeat of this crisis.”

Whereas leaders would probably prefer to be perfectly informed about when the next crisis might occur and why, they are not and will not be perfectly prepared when it hits again. The set of indicators economists use to illustrate economic and financial trends and predict future developments is limited to the set of issues they know about. Hence one report after the other illustrates the potential impact of higher debt levels, higher interest rates, housing market developments, financial market volatility, or global imbalances—quite a handful that already provides ample sources for concern. There are also known unknowns. For instance, we know trade protectionism will hurt economic growth. We know that economic protectionism combined with nationalistic political regimes tend to engineer negative economic outcomes because if history is a guide, we have seen these circumstances unfold before.

But what about phenomena we do not know about—the unknown unknowns—because we have not yet understood the implications? Coded by economic forecasters as “externalities” or “long-term issues,” these phenomena often get overlooked. Chief among these is climate change. A rapid increase in sea levels could have massive economic impacts. Scientists have been clear about what the environmental consequences could be: increasing sea levels, desertification, and extreme weather events, among others. World economic and financial leaders would certainly also like to be able to prepare for the dire consequences of such events on their economies.

If the consequences of climate change were better factored in and if the costs of environmental externalities were internalized, policy makers would necessarily be given a very different economic situation and outlook to discuss at their annual meetings. Given the breadth of the challenge posed by climate change, it seems that if nothing is done now—in the short term— “mitigating and coping with climate change,” the catch-all sentence that is expected to tick the box in most economic reports, will no longer be a sufficient proposition.

Simply coping with climate change requires significant investments in sustainable growth and creating the economic incentives to get there—for example, regulatory or market-based incentives such as appropriate emissions taxes, cap-and-trade, or carbon pricing mechanisms. The IPCC report estimates that governments would need to impose very high carbon prices in order to keep global warming within the boundaries set by the scientific community. Indeed we already know that there exist economic instruments that can support the reduction of emissions and raise fiscal revenue while supporting climate-friendly innovation —what is needed, is to spread the use of these instruments to have a global impact on consumers and businesses. Countries need to do far more to help avoid drastic climate events.

Forceful action is needed to not only cope with or mitigate the impact of climate change, but also to give people the information they need to have a fair try at reversing its course. Economic and finance ministers control the key financial levers at the national level. Governmental budgets should better reflect the costs of dealing with the consequences of climate-related events, by incorporating this information and by designing efficient tax revenue schemes. Likewise, macro-economic impact studies or scenarios could be modeled and, given the global nature of climate change, these could be presented in the context of “spillover” exercises.

A systematic inclusion of a climate-related risk into the traditional assessment of risks to the economic outlook (both upside and downside risks) would be a useful addition for the attention of policy makers. Climate change should be brought into the mainstream conversation when assessing the world’s economic performance otherwise both the public at large and policy makers are presented with incomplete information. The basis for diagnosing the health of our economies is incomplete—hence the unknown unknowns.

This year’s confluence of Nobel prizes and reports shows that the impact of climate change needs to be included in the mainstream information set of economic and finance ministers for them to accurately assess economic outlook. The Nobel committee said this year’s economic sciences prize recipients had “brought us considerably closer to answering the question of how we can achieve sustained and sustainable economic growth,” by developing models that explain how the market economy interacts with nature and knowledge. In 2007, the IPCC and Al Gore received the Nobel Peace Prize for “their efforts to obtain and disseminate greater knowledge concerning man-made climate changes and the steps that need to be taken to counteract those changes.”

What have we achieved since then? If we don’t take action now, there may be no economies left to invest in mitigating technologies or to produce higher growth rates in the future. Businesses are developing climate-friendly technological products for consumers who are aware and eager to solve these major climate-related issues, but this is not enough. The economic and financial leaders gathered in Bali last week have the influence to drive change, which can only be addressed through significant international cooperation. Will our leaders rise to the challenge?

Valerie Rouxel-Laxton is a nonresident senior fellow at the Atlantic Council’s Global Business and Economics Program.