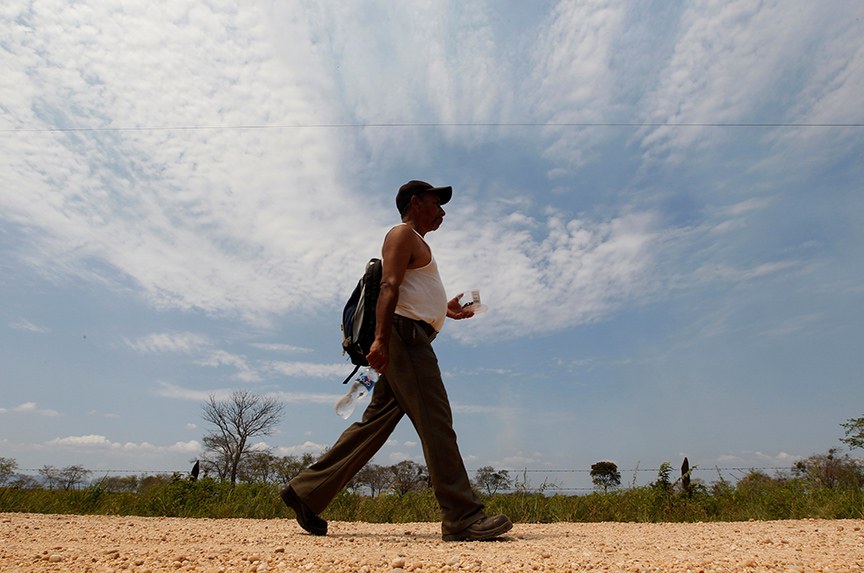 Adalberto Rodriguez, 58, from Honduras crosses into Mexico near the border with Guatemala in Tenosique, Tabasco, Mexico, on his way to the United States on April 11, 2017. (Reuters/Carlos Jasso) 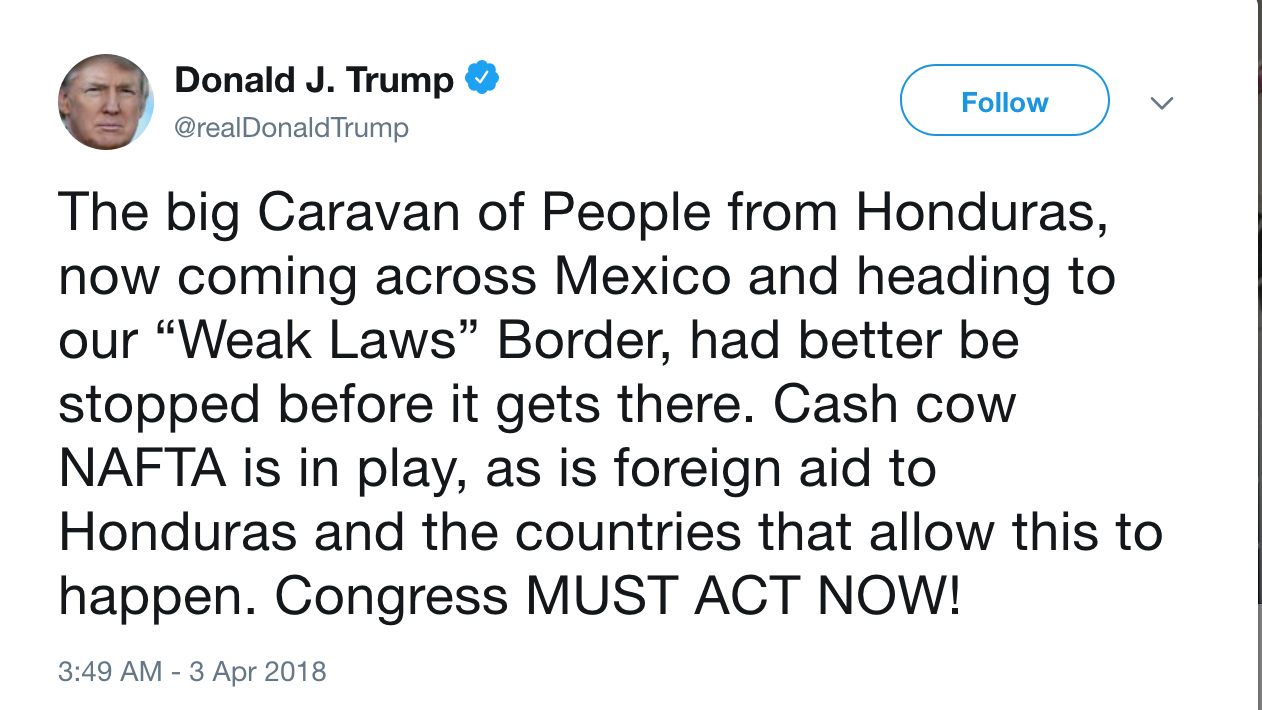 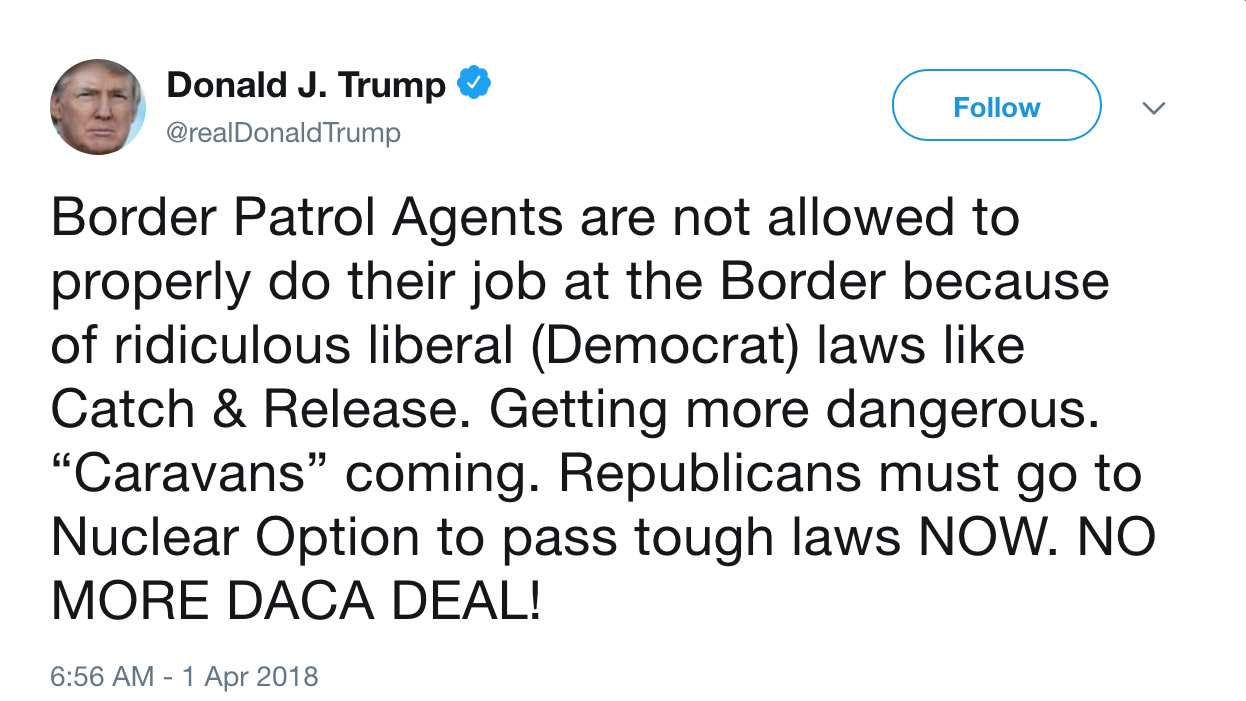 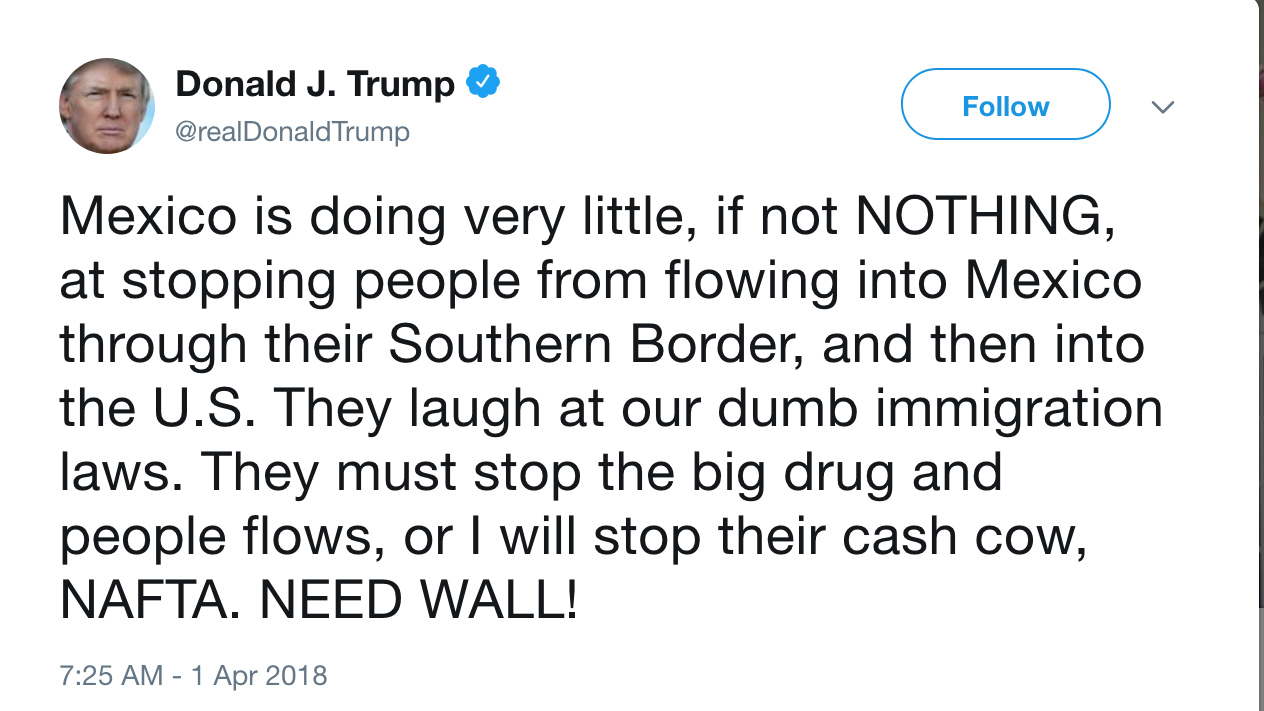 People from Central America’s Northern Triangle—Honduras, El Salvador, and Guatemala—make up the vast majority of migrants crossing into the United States from Mexico.

On May 4, 2017, John Kelly, White House chief of staff who at the time was serving as secretary of homeland security, said at the Atlantic Council that he had told Trump that in his view, the job of securing the United States’ southwest border “begins 1,500 miles south.”

Kelly spoke at the launch of a report from the Northern Triangle Security and Economic Opportunity Task Force of the Atlantic Council’s Adrienne Arsht Latin America Center. The report offers proposals on how the United States and the three Northern Triangle countries can jointly address long-standing regional challenges. Its recommendations are focused in the areas of rule of law, security, and sustainable economic development.

Jason Marczak, director of the Adrienne Arsht Latin America Center, discussed the factors in the Northern Triangle that are driving migration and the challenges governments, including that of the United States, face in stemming this flow.

Q: President Trump has warned that “caravans” of migrants are headed toward the United States. What are current migration trends from the Northern Triangle?

Marczak: The conditions in the Northern Triangle, specifically in Honduras, have worsened. The uncertainty around the re-election of Honduran President Juan Orlando Hernández has led to an increase in rule of law challenges that has aggravated an already difficult situation.

What is critical in Honduras, El Salvador, and Guatemala is reducing violence and promoting economic opportunity. It is a vicious cycle. There is a lack of investment because of the violence and insecurity, and so there are fewer jobs. This has perpetuated the push factors that are causing people to leave Honduras as well as El Salvador and Guatemala.

Q: What should be done to address these push factors?

Marczak: The key to preventing unauthorized migration from Central America is to improve the conditions in the countries themselves.

You need a strong border, but at the same time the border should be the last chance to prevent unauthorized people from entering the United States. Unless the impetus to leave the country changes it doesn’t matter how strong a border the United States has when people are without hope, opportunity, worried about survival, fleeing violence—domestic as well as gang violence. Conditions can be so bad in certain communities of the Northern Triangle that it doesn’t matter how tough the journey north is, if you’re living a life of such despair you are going to migrate.

Q; What is the United States currently doing to help the Northern Triangle countries deal with this problem?

Marczak: The real key for US strategy is to think about how we work with countries of the Northern Triangle to mitigate the push factors.

The United States has been incredibly engaged in Central America for quite some time. That level of engagement was ramped up with the Plan of the Alliance for Prosperity formed by the three Northern Triangle countries in September of 2014 right after the large influx of unauthorized unaccompanied children.

Congress has since continued to provide robust funding, which comes with a number of conditions.

Q: President Trump has threatened to cut off funding to Honduras over the migrant issue. Does the Honduran government have the capacity to stem the flow of migrants on its own?

Marczak: The state is not strong enough that it can close its borders. It doesn’t have the control of its territory to be able to prevent people from leaving. We are talking about a relatively weak state with few resources that are stretched incredibly thin.

What the government does have the capacity to do is to improve the investment climate so that Honduras can attract the necessary foreign investment that is critical for creating jobs; it does have the ability to reform its security apparatus, which it is in the process of doing through a major purge of the police.

The government has the opportunity to make Honduras a better place for doing business. The three countries of the Northern Triangle should work together to position the region as an investment destination. That requires unifying procedures that would create a Northern Triangle investment platform.

Q: Has the unwelcoming environment in the United States toward migrants coming from the south had any impact on the flow of migrants?

Marczak: The number of people coming across the southern border has been decreasing for quite some time. There has been for a number of years now a net zero migration at the border because you have as many people leaving as coming in.

President Trump is focusing on Central Americans, but the issue that should be of greater concern to the United States are the increasing refugee and migrant flows out of Venezuela. At present levels, by the end of 2018, three million people could potentially have left Venezuela. They are going to Colombia, Brazil, and beyond. This is incredibly destabilizing for the region. Some of these people are being coaxed into illegal activity—whether it is prostitution to survive or being recruited by criminal gangs. It is a crisis that will impact US security interests in a way that is much more profound than the Central Americans.

Q: What is Mexico doing to check the flow of migrants from the Northern Triangle into the United States?

Marczak: In 2014, Mexico began its southern border program which provides a three-tier level of prevention of unauthorized migrants from coming into Mexican territory. Mexico has made incredible progress in preventing unauthorized flows and in working to try to secure its border with Guatemala. The Mexican government has clamped down on the La Bestia, the train that migrants would ride on to go north through Mexico.

But let’s be honest: the border is far from secure. Unauthorized migrants that want to head north into Mexico know how to bypass the checkpoints set up by the Mexican government.

Mexican authorities used to see Central America as not their problem. That has changed. They now recognize that unauthorized migrants traveling through Mexican territory are a problem for Mexico because of the criminal networks that target these people.

Q: How are Trump’s comments on unauthorized migrants playing politically in Mexico where presidential elections will be held in July?

Marczak: Andrés Manuel López Obrador, the presidential candidate who is leading by double digits in most polls, has tapped into the widespread sentiment among many Mexicans about the fact that the government doesn’t work for the people, corruption, but also the anti-US, and especially anti-Trump sentiment. This is why he launched his campaign a few days ago on the US-Mexico border with a line that under his leadership Mexico will not be the piñata of any foreign government.

President Trump’s unfavorable tweets about Mexico serve to further propel the candidacy of López Obrador. He is seen by many as the candidate who is best positioned to be a vocal critic of Trump and has expressed numerous times that he will stand firm in protecting Mexican interests.