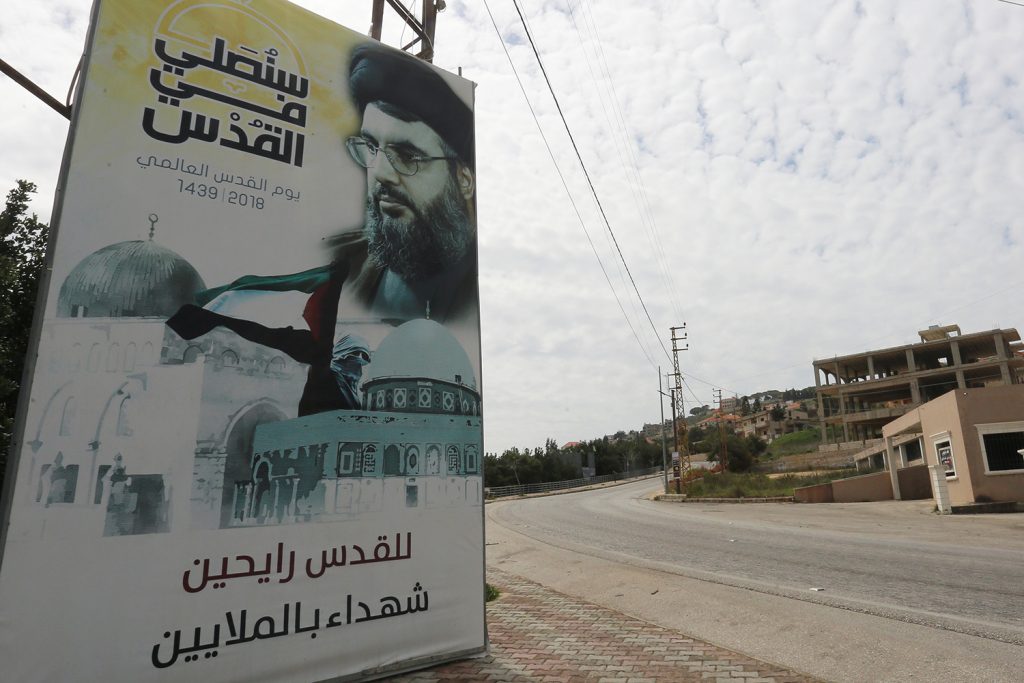 The international community has stood by and watched over the past two decades as Hezbollah has expanded its control into every sector of Lebanese government and society. Hezbollah, with its current alignment with the largest political bloc in the governing coalition, The Free Patriotic Movement (FPM), is now intent on taking full control of the critical branches that make up the Lebanese government.

Taking advantage of the FPM’s current position and the unrest caused by the economic crisis, Hezbollah and its allies in the FPM have turned their sights to Lebanon’s banking sector and Lebanon’s judiciary. With assaults on the free economy and judicial system, Hezbollah is on a path to completing its hegemony in Lebanon.

Hezbollah’s campaign to take over the Lebanese banking and economic sector is well documented, as the group has exploited the country’s poor economic and living conditions through the “October 17 Uprising” to attack and weaken the independence of the banking sector. Hezbollah has proven masterful in taking advantage of instability to weaken legitimate institutions and strengthen its stranglehold. In its ongoing campaign against the banking sector, Hezbollah has succeeded in turning public opinion against the banks and is using Lebanon’s financial crisis to bend the banking sector towards its purposes.

Equally troubling, Hezbollah and its FPM allies have subverted the rule of law in Lebanon by completely politicizing the Lebanese judiciary, which under FPM is characterized by systematic corruption and political cronyism.  Hezbollah and FPM-controlled judges have selectively targeted political opponents and legitimate businesses, such as Huda Salloum, ZR Energy, and Hadi Hobeich, with sham “investigations,” taking judicial corruption to another level.

While underreported, this assault on the rule of law did not go unnoticed. Last month, the Minister of Interior and Municipalities, Mohammad Fahmi, tweeted: “‘Innocent until proven guilty’ is a basic rule in legislation and laws. The issue is that the Lebanese have, unfortunately, lost faith in all institutions, powers, and devices, including the judiciary, which ought to be the first to initiate work on restoring this lost trust.”

And in a recent sermon, the very influential Maronite patriarch of Lebanon, Cardinal Mar Bechara Boutros Al-Raei noted: “How painful we are to lose our human face in Lebanon. I would like to mention in particular the practice of some judges who, from a political, retaliatory, or malicious point of view, are serving without regard for the dignity, will, prestige, and future of persons. How can it be justified to accuse and arrest at the same time without hearing the accused? Or to fabricate files to justify an arrest warrant? Has our system been transformed from a democracy that secures the civil and legal rights of all citizen into a police regime, a dictatorship that overthrows the first principle in the life of every nation: “Justice is the foundation of the king.”

In addition to these influential Lebanese leaders, impartial international organizations have taken notice of Lebanon’s judicial crisis. Every year the World Justice Project (WJP) publishes the Rule of Law Index, considered the world’s leading source for original, independent data on the rule of law, which ranks countries according to their rule of law performance

Countries with strong, independent judiciaries receive high scores; conversely, those countries with corrupt judiciaries score lower. Lebanon’s rankings in the recently published 2020 Index are disgraceful: out of 128 countries, Lebanon is 96th for rule of law; 92nd for regulatory enforcement; 76th for constraints on government powers; 101st for absence of corruption, and 100th for impartial criminal justice.

Just last week, the US ambassador to Lebanon, Dorothy Shea, in an interview on Lebanese television accurately stated that “Hezbollah is destabilizing the country and jeopardizing Lebanon’s economic recovery.” Hezbollah immediately condemned her statement and compelled the judiciary to take action. A Lebanese Judge, Mohammed Mazeh, from the Hezbollah controlled area of southern Lebanon, banned all local and foreign media from reporting the comments made by the US ambassador with threats of shutting-down offending media outlets. This weaponization of the judiciary by Hezbollah to censor criticism, attack an American ambassador and intimidate free and open media proves Ambassador Shea’s point: Hezbollah is the destabilizing force in Lebanon.

It is time for the West to confront this assault on the rule of law in Lebanon. Just as any International Monetary Fund-led financial bailout must include deep economic reforms to secure international aid, these bailouts must be accompanied by demands for deep reform to the politicized judiciary in Lebanon. Since the rule of law underpins every other sector in society, confronting Hezbollah’s erosion of this protection in Lebanon is critical. Without reform to the politicized and corrupt judiciary, financial bailouts will only treat one symptom of a failed state. The international community must force real judicial reform for any economic reforms to be successful and lasting.

Lebanon is a nation in crisis. Just as Hezbollah is the main cause of the current economic crisis, Hezbollah, through its FPM allies, is also the impetus for the assault on the rule of law. The Hezbollahization of Lebanon must be reversed. Reforming one broken sector in Lebanon without restoring the rule of law—the most foundational pillar of Lebanese society—will play into Hezbollah’s hands, continue the misery of the Lebanese people, and ensure Lebanon’s inevitable failure.

Michael D. Barbero is a retired US Army Lieutenant General who served three combat tours in Iraq, and is the former commander of the NATO Training Mission-Iraq. He was a member of Atlantic Council’s Task Force on the Future of Iraq.

Amid the coronavirus, where are US-Gulf counterterrorism efforts headed?

As governments of the Gulf Arab states seek to meet the extraordinary challenges posed by COVID-19, extremists have hastened to find ways to exploit the crisis.

By Marika Sosnowski and Jonathan Robinson

By mapping where Russia’s Center for Reconciliation of Conflicting Sides in Syria has delivered aid over an 18-month period (between 2018 and 2020), a picture of Russia’s soft power tactics in Syria can be formed.

By Salman Husain and Diam Abou-Diab

As multiple crises are simultaneously bearing down on Lebanon, its fragile humanitarian situation is nearing a breaking point.