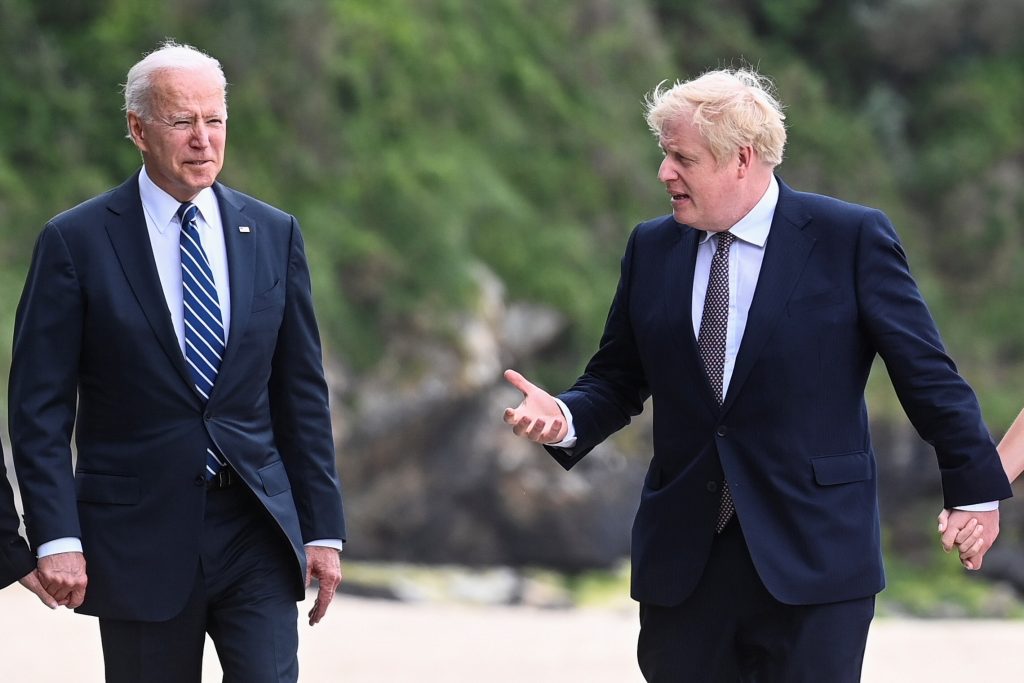 When US President Franklin Roosevelt and British Prime Minister Winston Churchill signed the original Atlantic Charter at the onset of the World War II, they outlined a vision for a world based on non-aggression, self-determination, and open trade. It was democracy’s answer to Nazism—and, by implication, Soviet communism—and was the original mission statement for what we now call the liberal, rules-based international order.

For all its failures and inconsistencies, it brought three generations of peace and prosperity.

Eighty years later, President Joe Biden put democracy at the center of US foreign policy once again when he joined British Prime Minister Boris Johnson in signing a new Atlantic Charter in June. The document sets forth a powerful statement of shared values and common aspirations—suggesting the United States, along with the United Kingdom, is prepared to lead the free world in a new era of strategic competition between democracy and autocracy.

But now the hard work begins. To succeed, the Biden administration must bring on board other US allies and take concrete steps to turn these principles into action.

As a statement of democratic determination at a time of rising authoritarian aggression, the Atlantic Charter 2.0 is the right effort at the right moment: Russia and China are advancing an alternative vision for how the world should operate, one based on coercion and authoritarianism. Democracies are on the defensive, confronting challenges to their political systems at home and abroad as autocratic rivals are gaining strength. Many in the free world are looking to the United States and its allies for leadership in meeting today’s challenges.

The New Atlantic Charter may be the first step.

Like its predecessor, this document lays out eight fundamental principles that reflect common values. Many of these principles—defending democracy, protecting sovereignty, advancing a rules-based economy, and fostering global cooperation—resonate with those in the original document. Others reflect the new challenges of the twenty-first century: emerging technologies, cyber threats, and climate change.

The New Atlantic Charter offers a dramatic counter-vision to the Chinese and Russian notion of a world dominated by autocracies. Standing in contrast to a strategy based on spheres of influence and so-called realism, it could inspire the free world to act together (and get its act together) to contend with the challenges it faces from these powers, from its own shortcomings, and from transnational problems. US foreign policy must be realistic about the limits of US power while at the same time standing for more than short-term expedience. Biden’s approach returns us to the best tradition of US grand strategy, recognizing that America succeeds when its interests and values advance together.

What made the original Atlantic Charter so compelling, however, was the action it inspired: While setting new rules and norms governing the behavior of states, the United States and other global powers also created new institutions to defend and enforce these rules. This included organizations such as the United Nations, the General Agreement on Tariffs and Trade (which became the World Trade Organization), and the World Bank—open to all nations of the world that agreed to comply with their rules—as well as NATO and other entities that allowed the United States and its allies to act by themselves to defend the free world.

Today, democratic nations should follow the new charter with bold actions and new institutions to address the urgent challenges facing democracies and the world—just as they did in 1945. This will require work on two main fronts.

First, the Biden administration must rally support for the New Atlantic Charter among its allies and partners. However stirring its words may be, the document’s weakness is that only two countries issued it; in order for it to work, other leading democracies must sign up. German Chancellor Angela Merkel’s recent endorsement of the Washington Declaration, which expresses joint support for upholding democratic principles and defending an open world, could be the first of a series of bilateral statements that culminate in multilateral endorsement of the New Atlantic Charter.

Nor can the charter serve as the foundation for a new global order without buy-in from a broader, more representative group of nations from Europe, the Asia-Pacific, Africa, and Latin America. Biden should start by encouraging other G7 members to endorse the charter and follow by inviting like-minded democracies worldwide which are willing to work together.

Second, the Biden administration must establish new institutions to implement the new charter’s principles. The United States should bring together a group of leading democracies—a D-10, along the lines proposed by Johnson—to foster strategic alignment and coordinated action on the challenges posed by China, Russia, and the wider world. Biden should establish a democratic technology alliance to ensure that the free world succeeds in the race for emerging technologies and develops standards to avoid misuse. He should also forge a new trade agreement that aligns the world’s democracies in a common framework to advance a free and fair global economy demonstrating that democracy can deliver. At the same time, Biden should use his planned Summit for Democracy as a platform to build a broader coalition of free nations aimed at defending democracy at home and fostering democratic norms around the world.

As it moves forward, the Biden administration can draw inspiration from concrete recommendations in these key areas, such as those set forth in the Carnegie Endowment’s Task Force on a US Foreign Policy for the Middle Class and the CNAS Technology Alliance Project. More broadly, the Declaration of Principles for Freedom, Prosperity, and Peace—prepared by an Atlantic Council task force of distinguished former officials from nineteen leading democracies spanning the globe—offers a blueprint for mobilizing the democratic world around shared principles defending a rules-based order. The 2019 declaration was endorsed by senior members of Biden’s foreign policy team, including National Security Advisor Jake Sullivan and Secretary of State Tony Blinken, before they took office.

Simply issuing a New Atlantic Charter will not be the answer—declarations are not self-executing—but it is a good beginning. With determined US leadership, it could set the stage for the resurgence of a world order based on democratic ideals and common principles. By working together, the world’s democracies will be in a stronger position to fix problems and contend with the despots who believe their time has come.

Ambassador Daniel Fried, a distinguished fellow with the Atlantic Council, previously served as US Assistant Secretary of State for European Affairs.

Ash Jain is director for Democratic Order at the Atlantic Council and previously served as a member of the Secretary of State’s policy planning staff.

That was then but this is now: Assessing the new Atlantic Charter

This moment—between these two iconic figures, engaged in an epic struggle against the ultimate evil—is magical. But that allure shouldn’t distract from the fact that the charter was not merely a vague wish list. It had a concrete function in the very tough relationship between two wartime allies.

FAST THINKING: The world has a new Atlantic Charter

US President Joe Biden and UK Prime Minister Boris Johnson signed a new Atlantic Charter today. What new forms of cooperation will it unleash among democracies? And what will it mean for the struggle between democracies and autocracies?