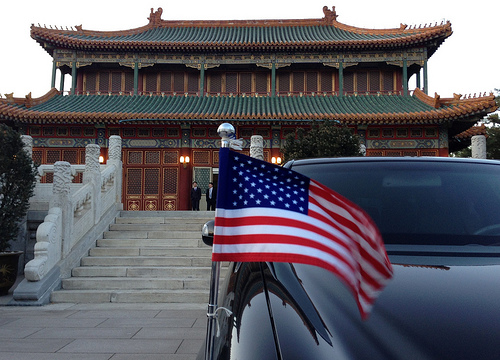 By now, those of you who have been following the Korean crisis have encountered plenty of proposals from pundits. Let’s consider some of them.

Perhaps the most original idea comes from a professor in Texas, whose advice is that the United States should launch a preventive strike on North Korea’s much-touted Musudan intermediate-range ballistic missile before it’s launched (as many people in the know, including South Korea’s foreign minister, expect it soon will be). That’s a great idea — if your goal is to start a war that might kill tens of thousands of people on the Korean peninsula and its environs. Any signs that the Obama administration is even planning to do something so reckless would sow panic in South Korea and Japan, America’s two principal allies in Northeast Asia, and have long-term, and wholly adverse, effects on its partnership with both countries. What Seoul and Tokyo seek from Washington is steadiness, not behavior inspired by Kim Jong-un.

A second, and far more sensible, set of ideas involves relying on China. The argument goes something like this: China has closer political ties with, and a better understanding of, North Korea than any other country — it’s also North Korea most important source of economic aid — therefore Beijing should walk Kim back from the cliff; if Beijing is not doing this, it is not being constructive and is indeed acting irresponsibly. Senator John McCain says China’s conduct has been “disappointing” because it has failed to calm the tempest. Senator Chuck Schumer urges Beijing to “step up to the plate” (one assumes that the baseball metaphor won’t be lost on Chinese president Xi Jinping) and rein in Kim. Japan, too, wants China to put more pressure on Kim.

Advocates of the China panacea seem to forget that Beijing has been urging everyone, including Washington, to avoid provocative acts — ones that may be intended to have one effect (showing resolve) but could end up having another (sparking war). China has a big stake in avoiding another Korean war: it could get sucked into it or, more likely, face a torrent of refugees fleeing the inferno or even the collapse of the North Korean state. Far from being indulgent, Beijing has failed to rally to North Korea’s defense, and its statements betray exasperation with Kim. Ordinary Chinese are more candid and are irked by what they see as Kim’s ingratitude and volatility.

The argument that President Xi can pick up the phone and order Kim to behave rests on an exaggerated notion of China’s influence over Pyongyang. Last December, North Korea tested a long-range rocket, ostensibly to launch a satellite into orbit, but perhaps also to test ballistic missile technology. This February, it conducted a nuclear test (its third). China was not happy about either move and had sought to dissuade Kim — but to no avail. Beijing voted for the March Security Council resolution that followed Pyongyang’s nuclear test and that expanded the existing system of economic sanctions on North Korea. That showed that China wanted to make its disapproval clear to Pyongyang.

Lots of Chinese aid flows to North Korea, but that doesn’t mean Beijing can veto what Pyongyang is determined to do. Think of it this way: the United States provides considerable economic and military aid to Israel, but Israel doesn’t take its cues from Washington when it comes to sensitive matters such as building settlements in the West Bank or taking military action in Gaza. Why should we assume that China has the capacity to determine the behavior of a regime that has a long record of defiance and brinkmanship, especially given that both Kim and President Xi are relatively new on the job and have no history of dealing with one another?

Then there are the proposals for offering incentives to North Korea. These are sensible in two respects. First, there is no military solution to the current crisis in North Korea. Second, diplomacy offers the only the only hope — a slim one in my view–for convincing Pyongyang to dismantle its nuclear weapons program. That said, now is not the time to roll out the dessert cart.

A familiar political pattern has been established on the Korean peninsula: Pyongyang goes into crisis mode because of something the United States and South Korea do (and plan to), everybody starts biting their nails and wringing their hands, threats from one side beget threats from the other, negotiations eventually resume, and the North is presented with enticements aimed at gaining its cooperation.

Once this crisis blows over — and it will — it’s important to restart the diplomatic machinery. But it is a bad idea to offer tangible benefits in the midst of this, or any future, crisis. Kim is inexperienced, and no country — not even North Korea — stands to gain if the lesson he takes away from this crisis is that the way to get goodies is by threatening to start a war.

For now, the best course of action is minimalism. There’s no need to keep announcing that North Korea’s nuclear and missile tests are unacceptable: Kim knows this. Given the United States’ decades-long commitment to South Korea’s defense, it’s also not necessary for Washington to keep proclaiming that it will defend its ally. What about those B-52 and B-2 flyovers of South Korea? It’s doubtful that such dramatic demonstrations serve as an added deterrent. What they do is raise the temperature in Pyongyang. The United States already has substantial firepower deployed in the North Pacific, and South Korea’s armed forces are well-trained, highly motivated, and equipped an array of modern armaments. Enough.

Maybe North Korea will test fire the Musudan soon — perhaps to mark the centennial of the birth of North Korea’s founder, and Kim Jong-un’s grandfather, Kim Il-sung. But should there be another round of warnings and countermoves in response? To what end?

In a matter of weeks, and maybe sooner, the ruckus on the Korean peninsula will have subsided. That’s the time for commencing creative diplomacy.

Rajan Menon is the Anne and Bernard Spitzer Professor of Political Science at the City College of New York/City University of New York, nonresident senior fellow at the Atlantic Council and the author, most recently, of The End of Alliances. This piece first appeared on The Huffington Post.