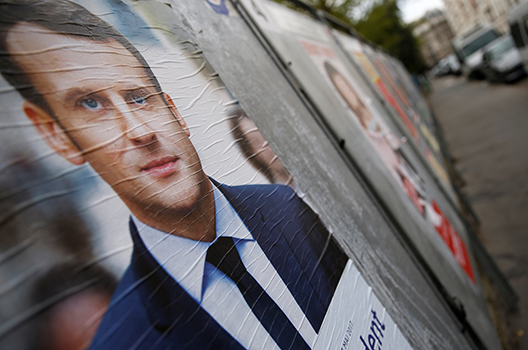 A campaign poster of Emmanuel Macron, head of the political movement En Marche! (Onwards!), and one of the eleven candidates who runs in the 2017 French presidential election, is seen in Paris, France, April 10, 2017. (REUTERS/Gonzalo Fuentes)

Just days before the final round of France’s 2017 presidential election—and mere hours before a media blackout would muzzle all content on the campaign—hackers and online trolls released and promoted a dump of leaked e-mails from leading candidate Emmanuel Macron’s En Marche! party, attempting to sway voters’ minds toward his competitor, National Front leader Marine Le Pen.

But that effort failed. Rather than stumbling due to the hack’s revelations, Macron sailed to a thirty-two-point landslide victory over Le Pen. Unlike previous disinformation campaigns in the United States, the United Kingdom, and the Netherlands, the leaked “documents,” which included faked memos and legitimate, but inconsequential, correspondence, were met largely with a collective shrug by the French electorate. Why did this campaign fail?

In a new report, “The ‘Macron Leaks’ Operation: A Post-Mortem,” Jean-Baptiste Jeangène Vilmer argues that the disinformation attempt failed because of conscious efforts by the French government and the Macron campaign to prepare for attempted electoral meddling and because of missteps by the leakers themselves. Vilmer is the director  of  the  Institute  for  Strategic  Research  (IRSEM)  at  the  French  Ministry  of  the  Armed  Forces  and  a  nonresident  senior  fellow  at  the  Atlantic  Council.

Vilmer explains that after the 2016 US presidential election, French campaigns and authorities were much more aware of the threat posed by disinformation. “Before the [2016 US] election, awareness of disinformation was mostly limited to the Baltic and Central European states,” Vilmer says in his report. “Since then, large Western European states have learned that they are also vulnerable and should be concerned.” This new concern led to French authorities providing “technically sophisticated and politically neutral expertise in order to guarantee the integrity of the electoral process from start to finish,” including technical training sessions for campaign officials to provide them with “the tools to monitor and detect suspicious activity in candidates’ information systems.”

This determination from the French government to address the issue not only “discourage[d] foreign disinformation campaigns,” but also “laid the groundwork for a swift and firm response” from both the government and the En Marche! campaign when the leaks were posted on May 5, according to Vilmer. Macron’s team “reacted in a matter of hours but was careful neither to overreact nor to violate the electoral silence,” Vilmer explains.

Macron’s team put out a statement on the leaks four minutes before the mandated media silence, while the French media regulatory authority (CSA) contacted all French TV and radio correspondents “asking them to abstain from disseminating any information on the election coming from the digital platforms,” Vilmer writes. These actions helped tamp down speculative reporting about the leaks and dented the ability of the leakers to create a false narrative about the content before the media blackout would prevent any response.

Macron’s team also helped inoculate itself from any potential document dump by preparing for the eventuality of a leak beforehand. “One reason there was nothing scandalous in the leaked e-mails is because Macron’s campaign staff was aware, from the beginning, of the intrinsic vulnerability of an e-mail account,” Vilmer explains. “They understood that everything they wrote could one day be hacked and leaked.”

The “#Macron leaks” operation: a post-mortem

“The #Macron Leaks Operation,” by Jean-Baptiste Jeangène Vilmer analyzes the coordinated attempt to undermine Emmanuel Macron’s candidacy, with a disinformation campaign consisting of rumors, fake news, and even forged documents; a hack targeting the computers of his campaign staff; and, finally, a leak—15 gigabytes (GB) of stolen data.

Much of the leaked trove of documents was simply campaign material that offered nothing of value to most readers. “These mundanities worked in the Macron campaign’s favor: they proved that, even behind closed doors, the campaign was clean,” according to Vilmer. “The fact that there was nothing harmful in the leaks made the leaks themselves actually positive for Macron’s image.”

Macron’s staff even took it a step further. “As the hacks could not be avoided, the team focused on slowing down the hackers by inundating them with false information and setting traps,” Vilmer reports. Knowing that many of the leakers would be foreign with little knowledge of French pop culture, Macron’s team planted fake e-mails with names such as David Teubey and Greg Latache, which would be instantly recognizable to a French audience as absurdist caricatures, rather than potentially salacious political actors. These efforts helped discredit the leaks with little to no effort from the campaign before the media blackout.

The traps set by the Macron team were compounded with errors by the leakers themselves, Vilmer writes. Perhaps the simplest error was a fundamental underestimation of Macron throughout the presidential campaign, as potential disinformation attackers focused their attention on other candidates they believed had a better shot of winning. More importantly, the tactic used by the leakers, which was to publish a large volume of material right before the deadline to try to inhibit Macron from being able to respond, backfired. “They did not expect the Macron campaign staff to react—let alone react so well,” Vilmer argues. “As it became obvious that the thousands of e-mails were, at best, boring and, at worst, ludicrous, the public lost interest.” The short time period also “left provocateurs insufficient time to spread the information,” and the use of English terms in many of the social media slogans hurt the content’s reach with the French-speaking audience, Vilmer explains.

While the failure of the leak can be attributed to the sloppiness of the hackers and cultural factors within France, Vilmer argues that governments and campaigns can learn several lessons. The speed of the Macron campaign’s response to the leaks shows the value of preparing for the eventualities of disinformation attacks. Trained in the potential threat of a hack, En Marche staff were ready to immediately respond to the leak, providing crucial context and rebuttals to the claims of the hackers before the mandated media blackout. Growing public awareness of disinformation also helped the French electorate and media view the leaked documents with suspicion, weakening their impact.

With little time left on the clock, Macron’s team was faced with a devastating leak with faked documents that could have torpedoed his campaign just days before the final vote. Rather than shrinking from the challenge, however, his team quickly acted to expose the disinformation. The failed disinformation effort serves as an example of how democracies across the globe can begin to push back against this threat.