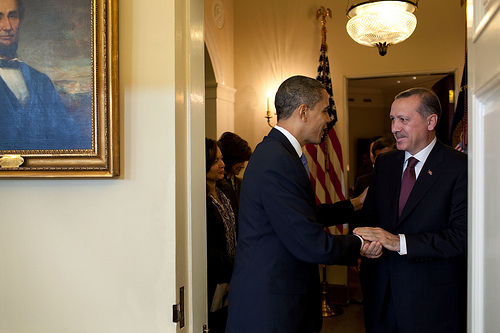 Early this week, the world looked to Turkish Prime Minister Recep Tayyip Erdogan for a response to the bombings in Reyhanli that killed 47 people and left more than 100 wounded. It was the deadliest terrorist attack in Turkey since the 2003 Istanbul bombings, shocking the nation and fueling anxiety over the war in neighboring Syria.  Erdogan signaled restraint for the time being with a statement that gave only cryptic and perhaps toothless promises of retaliation and emphasized cool-headedness.  “We won’t fall for the trap, but we will give the necessary response at the necessary time,” Erdogan said.  “Those who target Turkey will be held to account sooner or later…Great states retaliate more powerfully, but when the time is right.”

Washington was listening closely, as Turkey’s handling of the incident could prove more of a factor in the Obama administration’s Syria policy than its “red line” over chemicals weapons.

Reports of chemical weapons use in Syria have put President Obama’s flimsily-professed ultimatums to the test. Only a day before the attack in Reyhanil, Erdogan made it clear that he believed Syria had crossed the line “a long time ago,” citing Turkish intelligence reports that the Syrian government has used at least 200 chemical missiles. But Obama’s calculus appears to be immune to such assessments, which have been echoed by Israeli and British intelligence. Exercising the utmost caution towards engagement in Syria, the White House quietly added caveats to its “red line,” a move that the Atlantic Council’s Barry Pavel argues backed the administration into a corner by leaving “no clear, actionable options for the United States to respond directly to Syria’s use of weapons of mass destruction.”

Chemical weapons will not precipitate US action in Syria, as the bar that the White House has set—essentially, incontrovertible proof of use on a mass scale—is high and the evidence itself difficult to access under circumstances on the ground in Syria. Indeed, the administration will probably not go to great lengths to acquire or confirm such information, considering the associated policy implications. Nor will harsh public criticism of the lack of American leadership in Syria that dominates op-ed pages and policy briefs change the status quo, as the majority of American citizens Obama answers to have no appetite for new experiments in the Middle East in nation-building at best, and failed statehood at worst.

It is perhaps only the obligation to support and protect key regional allies, who are increasingly becoming involved in the conflict, which may compel the United States to pursue a more active Syria policy.

Israel, which has its own stakes in the Syrian conflict, escalated its role earlier this month by launching a second round of airstrikes not only on arms shipments reportedly destined for Hezbollah, but also a Syrian elite forces base. Israel also expressed concern about a Russian arms delivery to Syria including advanced S-300 missile batteries, a surface-to-air missile system that would make it more difficult to impose a possible no-fly zone. Syrian troops and the Israeli Defense Forces have exchanged fire across the ceasefire line in the Golan Heights, an area that if destabilized could provoke full-scale hostilities. Trouble is also on Israel’s doorstep in the north as Lebanon faces a growing list of challenges to its own tenuous domestic peace.

Israel has entered into conflicts without US military support many times, but in the case of Syria the prospects of a regional war posing a more geostrategic threat to Israel are real. Clearly, Israel believes it is endangered by the prolonged chaos in Syria that provides opportunity for terrorist groups to arm and operate freely, and its propensity to strike preemptively on matters of national security has the potential to inflame these regional tensions. Partial intervention to shape outcomes in Syria and hasten the end of the conflict may eventually be preferable, in Obama’s mind, to scenarios in which large-scale violence leaks across Syria’s borders into Israel (perhaps via Lebanon).

The Reyhanli bombings this week, if confirmed via investigation to be a direct spillover of the Syrian war, show that Turkey’s security is also increasingly threatened as the conflict drags on. If the trend continues, it may place additional pressure on Obama to initiate new steps in Syria, for example the imposition of a no-fly zone or provision of lethal assistance to rebel groups.

In terms of capitalizing on this opportunity to extract a more proactive Syria policy from Obama, Erdogan’s cool-headed statements show that, publically, he is buying time. In his official meeting with Obama at the White House today, scheduled well before the attacks occurred, he was expected to persuade his counterpart to change the course in Syria and commit greater involvement, but instead remained cautious during the press conference.

In an underreported development, the Turkish army sent more troops to the Syrian border region immediately after the attack on Sunday, including air and ground military reinforcement, signaling that it is prepared to defend and retaliate against security threats unilaterally. But Turkey is not in a position strategically to take serious action against the Syrian regime without US support, and therefore cannot drag the US into Syria using its own “red lines” the way Israel potentially could.

Power dynamics aside, if Assad’s camp is directly implicated in the bombings, Turkey could invoke Article 4 of the NATO charter to precipitate a policy change. This clause requires member states to consult collectively whenever the territorial integrity, political independence or security of any of the parties is threatened, and has been used twice by Turkey since the Syrian conflict began. In November 2012 NATO acquiesced to Turkey’s request for greater defense on its border, deploying Patriot air defense missile batteries. Article 5 of the NATO charter, which considers an attack against one member state an attack against the entire alliance, may also become increasingly relevant to the discussion.

As Israel and Turkey are pulled deeper into the Syrian crisis, the importance of Obama’s stance on chemical weapons use is fading. The grave security threats posed to both allies as Syria spirals out of control, and the way in which they may leverage their alliances with the United States to enlist its help, could prove the catalyst for American policy in Syria.