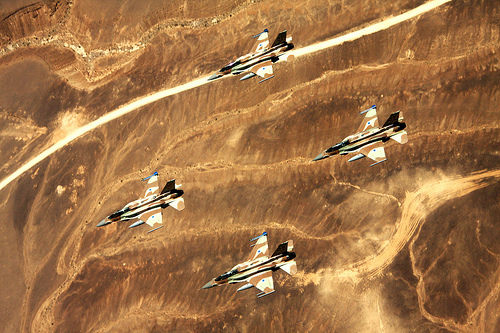 Israel’s military intervention in Syria destroyed Hezbollah bound missiles that might soon be aimed at Israeli cities and was clearly in Israel’s national interests.

Now there is pressure in Washington for the United States to follow Israel’s lead and to also get involved militarily. President Obama should resist these calls. There is no compelling national interest that requires American intervention in Syria’s civil war. In fact, such an intervention would be a strategic error. It would further poison America’s already threadbare standing in the Middle East and damage America’s military and its economy.

Politicians who are backing the president into a corner after the Israeli strikes to force him to intervene militarily in Syria should ponder the words of the nation’s most senior military officer, General Martin Dempsey, Chairman of the Joint Chiefs of Staff. Speaking at an editorial board meeting of the Christian Science Monitor last week he pointedly warned,

“Whether the military effect would produce the kind of outcome I think that not only members of Congress but all of us would desire — which is an end to the violence, some kind of political reconciliation among the parties and a stable Syria… It’s not clear to me that it would produce that outcome,” he said.

These are words that the president and his advisers would be wise to heed.

An American no-fly zone is being touted as being an easy way to limit the killing of civilians by the Assad regime. Aside from the dangers inherent in trying to enforce a no-fly zone in a country like Syria armed with potent anti-aircraft defenses, the rationale for the no-fly zone is fallacious to begin with. Here’s the Chairman of the Joint Chiefs of Staff again,

“Dempsey… questioned just how effective a no-fly zone would be. About 10 percent of the casualties taken by the Syrian opposition are from air attacks, he said. “The other 90 percent are through direct fire or artillery,’ he went on, “so the question then becomes: If you eliminate one capability of a potential adversary, will you be inclined to find yourself in a position to be asked to do more against the rest?” [emphasis added]

General Dempsey’s words are a clear warning that an American no-fly zone would not be effective and should the president give in to it he would soon find himself under pressure to use the U.S. military to attack ground targets, in a civil war being fought in cities without front lines.

Arming the opposition, another popular sentiment among those eager to get the United States involved in Syria, would also be a strategic blunder. Just listen to how carefully the Secretary of Defense Chuck Hagel tip-toed around this issue last week:

…Hagel… acknowledged it could lead to weapons falling into the hands of anti-American extremists such as the Nusra Front. “These are options that must be considered with partners, with the international community, what is possible, what can help accomplish these objectives,” he said.

There is also the likelihood that Assad may still win this civil war. Bruised though it may be he still has the support of a substantial portion of Syria’s potent military, and lately Assad’s forces seem to be on the offensive. Euronews reported last week that State forces appear to have made substantial gains in recent weeks; they have seized several suburbs outside Damascus and recaptured territory in Homs, the birthplace of the armed insurgency.”

Yes, the casualties from the Syrian civil war now exceed 100,000. But some 750,000 people perished in the American Civil War, and that horrendous tragedy gave birth to a nation that became the envy of the world. Europeans slaughtered each other by the millions for years before giving birth to the European Union that has remarkably ended major wars on that continent. The countries of the Middle East are barely a hundred year old. They were carved out of the Arab sands by France and Britain not to create stable nations but to serve colonial ends. Viewed in this light, the Syrian civil war, as terrible as it is, may be a necessary step in the country’s transition to a more stable future.

Sarwar Kashmeri is a senior fellow with the Brent Scowcroft Center on International Security. This piece was originally featured in The Huffington Post.