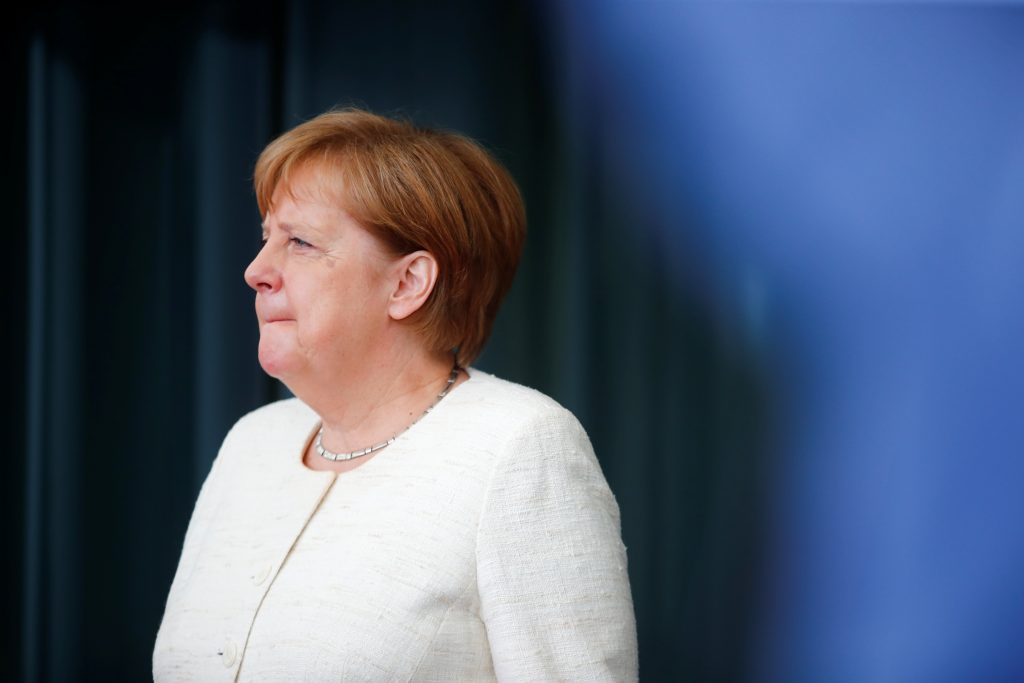 German Chancellor Angela Merkel waits for the arrival of Chinese Vice President Wang Qishan at the Chancellery in Berlin, Germany, May 31, 2019. (REUTERS/Hannibal Hanschke)

BERLIN – Last March, as Italy’s government was rolling out the red carpet for Chinese President Xi Jinping, French President Emmanuel Macron decided to send him a signal that Europe’s biggest countries were not about to go soft on China.

Rather than hosting Xi alone in Paris on the second leg of his European visit, as originally planned, Macron invited German Chancellor Angela Merkel and European Commission President Jean-Claude Juncker to join their meeting at the Elysee Palace. The message was clear and powerful: France was prepared to sacrifice its own interests to ensure a common European front on China.

Nearly half a year later, the French are still waiting for a sign that Merkel might reciprocate. Instead, she will head to Beijing on Thursday with a large delegation of German CEOs and, according to people involved in the planning of the trip, one main objective in mind: ensuring that German-Chinese business ties remain on track amid growing risks tied to US President Donald J. Trump’s trade war with China and protests in Hong Kong.

According to these sources, Merkel’s office rejected a proposal that executives from non-German companies, including French, be allowed to join her delegation. That would have sent a signal to the Chinese—and to Macron—that Berlin was focused on the bigger picture, not just its own economic interests.

As the trip approaches, people who follow Merkel’s China policy closely are worried that her government, spooked by a sudden slowdown in the economy, may be heading in the opposite direction, softening its China stance to avoid more economic damage and hedging against an increasingly erratic and unreliable United States under Trump.

Mikko Huotari, deputy director of the Mercator Institute of Chinese Studies (MERICS), a think tank based in the German capital, is one of them. “Berlin may be the biggest threat to a tough, united European position on China right now,” he told me. “The attitude is ‘let’s get back to business’ with Beijing.”

If such a shift is indeed underway, it would be remarkable and significant. It was Germany after all, together with France, that pushed the European Union (EU) to adopt a tougher line on China over the past year.

In response to a flurry of Chinese acquisitions on the continent, the EU agreed new rules that allow for closer scrutiny of foreign investments and began a debate on overhauling its procurement, competition, and industrial policies to push back against China’s state-driven capitalism. Last March, before Xi’s visit, a toughly-worded European Commission paper described China as a “systemic rival” and Macron declared that the era of European “naivety” on China was over.

A more conciliatory stance from Berlin undermines this narrative and is likely to aggravate tensions with the Trump administration, which has been engaged in an aggressive lobbying campaign to convince European capitals to push back harder against China.

This past spring, I discussed the potential for transatlantic cooperation on China with dozens of US officials. Many of them were skeptical about Berlin’s willingness to put its economic interests in China at risk and unify Europe behind a tougher line.

One comment from a Washington-based official who speaks regularly with the Trump administration on trade issues, sticks with me. “What happens when growth slows or Europe falls back into crisis? How united do you think they will be then?” he asked. With the German economy heading toward recession, the question seems more relevant than it did a few months ago.

German officials deny that Berlin’s stance is softening. One diplomat I spoke to described Merkel as “absolutely clear-eyed” on the China challenge. But he also added this: “Look, there is a high risk that Trump starts a trade war with Europe soon. The German economy is slowing. Is now the right time to antagonize the Chinese?”

In truth, the tougher European front on China has always looked fragile. Italy became the first Group of Seven (G7) country to sign up to Xi’s Belt & Road Initiative during his visit in March and countries like Hungary, Greece, and Portugal continue to welcome Chinese investments in their rail infrastructure, ports, and energy networks.

Post-Brexit Britain will be reluctant to take any steps that threaten its economic relationship with China. Boris Johnson, the new British prime minister, has described himself as “very enthusiastic” about Belt and Road and promised to ensure that the United Kingdom remains the most open economy in Europe to the Chinese.

In Berlin, tensions have been simmering for over a year between those in the government who believe China should be seen through a broader strategic lens and those who are loath to see the economic relationship damaged, particularly at a time when transatlantic relations are under so much strain. Lately, this second group seems to have gotten the upper hand.

Officials from the German foreign and interior ministries, along with the intelligence agencies, who earlier this year were urging the government to exclude Chinese telecommunications group Huawei from Germany’s next-generation 5G mobile network because of spying and sabotage risks, appear to have lost out to people in the chancellery and economy ministry who worry such a move would antagonize Beijing, delay the 5G rollout, and hurt German competitiveness.

The mood among German companies is also shifting. In January, the Federation of German Industries (BDI) published a report that cautioned German companies against becoming too dependent on the Chinese market and urged Merkel’s government to develop a more joined-up European response to Beijing. A month later however, Joe Kaeser, the CEO of Siemens and one of corporate Germany’s most vocal advocates of a close relationship with China, took over as head of APA, an influential lobby group for German firms active in the Asia-Pacific region. Kaeser has pushed behind the scenes for a more conciliatory line, people in Berlin say, and both Merkel and her economy minister, Peter Altmaier, seem to be listening.

During the September 6-7 visit, which will take her to Beijing and Wuhan, Merkel is expected to press China for a breakthrough in long-running negotiations on a bilateral investment agreement with the European Union. German officials want to be able to celebrate a deal on the pact at an EU-China summit that Merkel will host in the eastern German city of Leipzig next September. Talks on the investment pact were launched in 2013 but have gone nowhere. The hope in Berlin is that China, keen to keep Europe close as Trump’s trade war rumbles on, may now be prepared to make concessions to get the deal done. The Leipzig summit is being billed by people close to Merkel as the flagship event of Germany’s EU presidency in the second half of 2020.

For Macron, a return by Germany to a business-first agenda with China would be a slap in the face after months of French disappointment with Merkel’s cooperation on reforming euro zone finances and EU defense policy.

His entourage has been waiting for a signal from Merkel that Germany is prepared to put European unity before German business interests, as she has done on Brexit and Russia. If she fails to deliver, Mathieu Duchatel, head of the Asia Program at the Institut Montaigne in Paris, worries that Macron’s decision to invite Merkel and Juncker in March may be seen in Beijing as a sign of French weakness rather than one of European unity or strength.

The wild card ahead of Merkel’s trip is the situation in Hong Kong. Following the arrest of several prominent pro-democracy activists earlier this week, protestors clashed with police on Saturday in one of the most intense days of conflict since the marches began in June. If the violence continues, it could become difficult for Merkel to make the trip at all, let alone focus on business ties. On this, even German diplomats seem to agree.