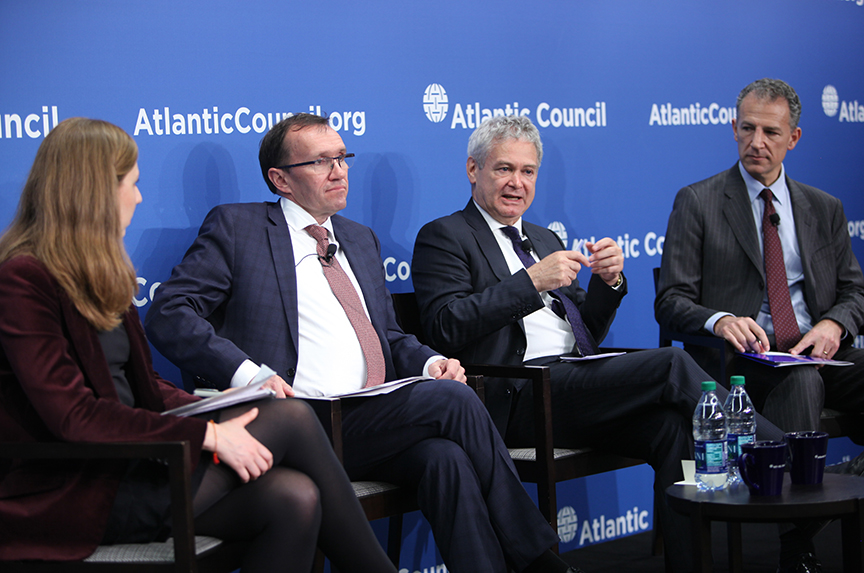 Greek and Turkish Cypriot leaders, as well as the leadership in Athens and Ankara, are committed to ensuring the success of a protracted process aimed at the reunification of Cyprus, a top United Nations (UN) official said at the Atlantic Council on March 8.

“I am more and more convinced that all parties would like this to be solved now,” said Espen Barth Eide, the special adviser to UN Secretary-General António Guterres on Cyprus.

“On the strategic outlook map of each of these players, a solution in Cyprus is factored as a positive thing. What we have to do is align their positions sufficiently that they can agree on something that they can all live with. I think that is possible,” he added.

With the Mediterranean island seemingly on the brink of peace, the Atlantic Council hosted a conference—“Strategic & Sustainable Development for a Unified Cyprus”—in partnership with Concordia and One Cyprus Now on March 8.

“We insist that the leaders own literally every sentence and every comma that is written” in a peace agreement, said Eide, who participated in a panel discussion. “We are actually in this last mile… One of the reasons that I think it will work this time is because I think these two leaders have it in them both to get to a deal and then to convince their respective communities that this is a good deal and also the best deal you can actually get,” he added. Eide was referring to Turkish Cypriot leader, Mustafa Akinci, and his Greek Cypriot counterpart, Nicos Anastasiades, who have led the peace talks.

Cyprus was split into an internationally recognized Greek-speaking south and a Turkish-speaking north in 1974 when Turkey invaded following a coup by supporters of a union with Greece. Turkey does not recognize Cyprus as a sovereign country.

Plans to reunify the island have faltered in the past. In 2004, the Greek Cypriot side rejected a United Nations plan for reunification and Cyprus joined the European Union as a divided island.

Eide said an effort is being made to distinguish security into four layers—constitutional security, internal security, security of implementation, and external security. The first two layers will depend on the legitimacy and durability of a peace deal the Cypriots reach between themselves, he contended.

‘A catalyst for peace’

Reunification efforts have been fueled by the discovery of vast reserves of natural gas in the eastern Mediterranean, especially in the area around Cyprus, Egypt, Israel and Lebanon.

Energy can be a “catalyst for peace” in Cyprus, “if we use it right,” said Eide. “Among the many good arguments for having a settlement now, gas is one of them,” he added.

Reunification talks hit a snag, however, in February when Akinci, the Turkish Cypriot leader, decided not to attend a scheduled meeting with Anastasiades in protest against a Greek Cypriot decision for public schools to honor the anniversary of a 1950 referendum for union with Greece, or “enosis.”

Anastasiades has accused the Turkish Cypriots of using this as an excuse to stall peace talks until after a Turkish referendum on April 16 that will expand Turkish President Recep Tayyip Erdoğan’s powers.

Andreas Mavroyiannis, negotiator of the Greek Cypriot community who participated in the panel discussion with Eide and Jonathan R. Cohen, deputy assistant secretary for Cyprus, Greece, and Turkey in the State Department’s Bureau of European and Eurasian Affairs, said the Turkish referendum is an obstacle to the peace process. It is hard to expect the Turkish government to take bold decisions concerning the future of Cyprus before the referendum, Mavroyiannis said. “We always believe that at the end of the day the key for this agreement in Cyprus lies with Ankara,” he added.

It is in Turkey’s best interests to find a solution to the problem Cyprus in order to have “seamless economic cooperation in the eastern Mediterranean,” said Mavroyiannis.

Sara Stefanini, a senior policy reporter with POLITICO, moderated the discussion between Eide, Mavroyiannis, and Cohen.

A firm US commitment

Despite this hiccup in the talks, officials involved in the process are confident of and committed to its success.

The United States has supported the UN-facilitated reunification process. That support has not wavered with US President Donald J. Trump’s administration. In fact, some of the first calls US Secretary of State Rex Tillerson made after taking office were to Akinci and Anastasiades.

Affirming the Trump administration’s commitment to reunification, Cohen said a reunified Cyprus will be “good for Cyprus, for the region, and will improve the lives of all the people of the island.”

Reunification will also have important economic, security, and political benefits, Cohen said, adding: “Those interests have not changed with the change of administration [in the United States], and consequently strong US support behind the process has not changed.”

Reunification would unleash Cyprus’ potential to export natural gas and help wean Europe off its dependence on Russian energy exports.

“It is important now that we start planning for success,” said Victoria Nuland, who was closely involved in the reunifications process in her capacity as assistant secretary in the State Department’s Bureau of European and Eurasian Affairs in the Obama administration.

Nuland, who delivered opening remarks at the conference, said that when she left her job at the State Department two months ago “you could already see the finish line” in the reunification talks.

“The US does have a profound interest in not simply seeing a resolution to a long, knotty problem, but also to seeing these two communities… proving to the world what is possible when you work hard for peace and then becoming a flourishing center of prosperity, of security, and of good governance,” Nuland said.

“It is important now that we start planning for success” in the Cyprus reunification talks, said Victoria Nuland, who served as assistant secretary in the State Department’s Bureau of European and Eurasian Affairs in the Obama administration. (Atlantic Council/Victoria Langton)

Damon Wilson, executive vice president of programs and strategy at the Atlantic Council, described Cyprus as part of the “unfinished business” in Europe. “Barriers falling, peace and prosperity rising in their place—that’s the story of Europe in the twentieth century. And while there are questions looming over the future of Europe right now, that formula is an important story for Cyprus today, but we all have to remember it is not inevitable,” he said.

A second panel at the conference discussed new models for development on a unified Cyprus. David Bonanno, managing director at Third Point LLC; Rachel van Elkan, adviser in the European Department and mission chief for Cyprus and Switzerland at the International Monetary Fund (IMF); and John Harkrider, executive director of One Cyprus Now, participated in the discussion, which Wilson moderated.

Van Elkan said it is important for all parties in the reunification talks to focus now—even before reunification is achieved—on building the economy and institutions “so that on Day One one does not start with a vacuum.”

“If things get off on the right foot it will… set a good precedent for the future,” said van Elkan, noting that the IMF is providing technical assistance on Cyprus’ economy.

Today, Harkrider claimed, Cyprus has enormous potential to be a major Mediterranean trading hub and one of the fastest-growing economies of the European Union.

Image: From left: Sara Stefanini, a senior policy reporter with POLITICO, moderated a discussion between Espen Barth Eide, the special adviser to UN Secretary-General António Guterres on Cyprus; Andreas Mavroyiannis, negotiator of the Greek Cypriot community; and Jonathan R. Cohen, deputy assistant secretary for Cyprus, Greece, and Turkey in the State Department’s Bureau of European and Eurasian Affairs, at a conference jointly hosted by the Atlantic Council, Concordia, and One Cyprus Now in Washington on March 8. (Atlantic Council/Victoria Langton)