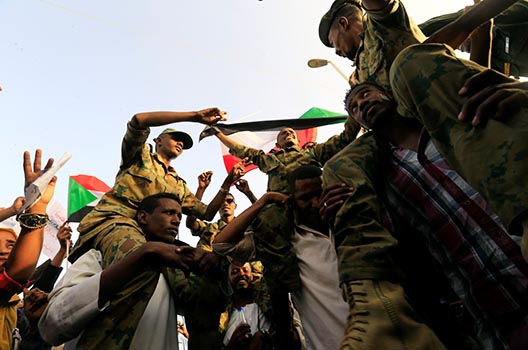 Nearly six months of peaceful civilian-lead protests in Sudan succeeded in April in casting aside thirty years of brutal dictatorship. But with an economy flatlining and government institutions crumbling in the wake of decades of corruption and neglect, Sudanese of all stripes remain in the streets demanding the kind of democratic transition that eluded so many of their neighbors in the years since the Arab Spring began.

For nearly twenty years, the United States has been on this ride with Sudan—coercing, cajoling, and engaging the Sudanese to make peace with themselves and others. When US President George W. Bush appointed our first special envoy for Sudan, Republican Sen. John Danforth of Missouri, in the days preceding the September 11 attacks, Sudan was already a pariah state. On the US State Department’s list of State Sponsors of Terrorism—where it remains—Omar al-Bashir’s regime had played host to al-Qaeda founder Osama bin Laden, supported the attack on the USS Cole, and attempted to assassinate Egyptian President Hosni Mubarak.

And yet, what Danforth and Bush knew was that if we wanted to address our own national security concerns in arresting the spread of Islamic extremism those efforts would necessarily have to occur in places like Sudan. In his parting report to the president, Danforth argued that the United States should not “own” any peace process in Sudan but be “cooperative and catalytic” to it, using our “energetic and effective” diplomacy. For nearly twenty years since, Danforth’s formula has characterized the US approach to Sudan. Until now.

Since Danforth, five subsequent US special envoys have worked to curtail violence in Darfur, avoid a new civil war and ensure the peaceful separation of South Sudan, and establish a robust counterterrorism relationship to safeguard US interests. Success has not been unmitigated, but it did earn the United States the reputation as a peacemaker and even a partner in maintaining stability in the volatile headwaters where the Arab and African worlds collide.

Today, Sudan is at another crossroads and the need for “cooperative and catalytic” US leadership is no less great. But at this perilous moment, where there is an opportunity for the Trump administration to summon years of built up leverage to ensure a lasting transition to democratic rule and regional stability in Sudan, will Washington answer the call? So far the answer seems to be no.

In the midst of uncertainty on the streets of Khartoum, the United States is entirely absent, ceding our diplomatic high ground to the Gulf Arab states who prefer a version of strongman rule they themselves have at home. Left unchecked, Sudan will be no more than a political and economic vassal to the anti-Iran, anti-political Islam forces that dominate the region.

Since Bashir’s ouster, Egypt, Saudi Arabia, and the United Arab Emirates have all heaped praise and credibility on the military generals in Khartoum who seized power in April—injecting at least $3 billion worth of new money and humanitarian assistance the junta can now use to build support and burnish their argument to remain in charge. Fortunately, the protesters know a buy-off when they see one, responding with a resounding “keep your money” to Gulf entreaties. But without Washington as a counterweight, the flood of outside influence is likely to drown out any lasting calls for change.

While trading democratic values for short-term security needs may seem like an acceptable bargain these days, the thousands of Sudanese civilians still flooding the streets disagree. The longer they are denied their basic demands of a civilian-lead transition the greater the likelihood that one side loses patience—and the junta cracks down or the protesters depart from their non-violent principals. Either outcome would deal a powerful blow to future peace and stability and play into the hands of even more extreme forces waiting in the wings.

In his first publicized remarks in years, ISIS’ reclusive leader Abu Bakr al-Baghdadi in April singled out Sudan as a future battleground, no doubt hoping to recruit the thousands of disaffected regime insiders, militia leaders, and military stalwarts being cast aside in the current power reshuffle. Doing so would give ISIS direct Red Sea access and a connection point to its growing network of affiliate groups already operational in neighboring Mali, Niger, and Congo.

With such high stakes, what is Washington waiting for? While envoys may remain out of fashion, they can have real impact when their mandate is clear, their appointment limited, and their political support evident. As a first step, dispatching a senior-level State Department envoy to Khartoum would demonstrate Washington’s involvement in a meaningful way thus far not in evidence, help level the playing field and facilitate negotiations between the opposing sides inside Sudan, and leverage past administration efforts to build and sustain peace. The need is especially acute given that Washington has been without a resident ambassador in Sudan for twenty years and is currently represented by only a skeletal diplomatic staff.

A second stop must be the regional capitals, namely Riyadh, Abu Dhabi, and Cairo. All have deep financial, political, and security concerns in Sudan, not to mention close professional ties to Sudan’s still-ruling military-intelligence apparatus. (The deputy chairman of Sudan’s ruling Transitional Military Council, Gen. Mohamed Hamdan Dagalo, also commands Sudan’s troop deployment to Saudi Arabia’s war in Yemen and received his military training in Cairo alongside Egyptian President Abdel Fattah el-Sisi). And while theses influential states will be reluctant to abandon their interests to chance or the whims of the street, a US envoy could help reassure them of our common security interests, create the time and space for a Sudanese-born solution to take shape, and coordinate their competing political agendas to avoid Sudan becoming a pawn in regional power politics.

In Africa, a US envoy could reinvigorate the traditional role played by African states in supporting peace in Sudan and in pushing for the return to democratic principles following military coups. So far, the African Union, currently chaired by Egypt, has been lax in calling for the establishment of a democratic transition in Sudan—choosing to extend forbearance to Sudan’s military leaders to consolidate their hold on power rather than vigorously applying a two-week deadline for a civilian transition it has applied to other members post-coup.

Lastly, rallying Europe’s collection of Sudan envoys into a strong Euro-Atlantic alliance is essential if we hope to prevent China and Russia from increasing their foothold in Sudan and scuttling any hope for democratic transition. Already, reports of newly acquired Russian armored personnel carriers and Chinese light weapons by Sudanese forces suggest that the deck is being stacked against a civilian-led outcome. But with the ability to engage the international financial institutions around relief for Sudan’s staggering $55 billion external debt and the promise of new development assistance, Europe’s role could be instrumental in helping to counter the stiff geopolitical winds buffeting Sudan today.

After nearly twenty years of diplomatic investments in Sudan, the United States has the best opportunity ever of advancing the principles of securing peace, promoting stability, and combating extremism that led to the appointment of John Danforth so long ago. But these ambitions cannot be subcontracted to those with the ambition to seek their own ends. They require “energetic and effective” US leadership. It is time we return to Danforth’s founding principles of our engagement and help finish the job so many have toiled to achieve.