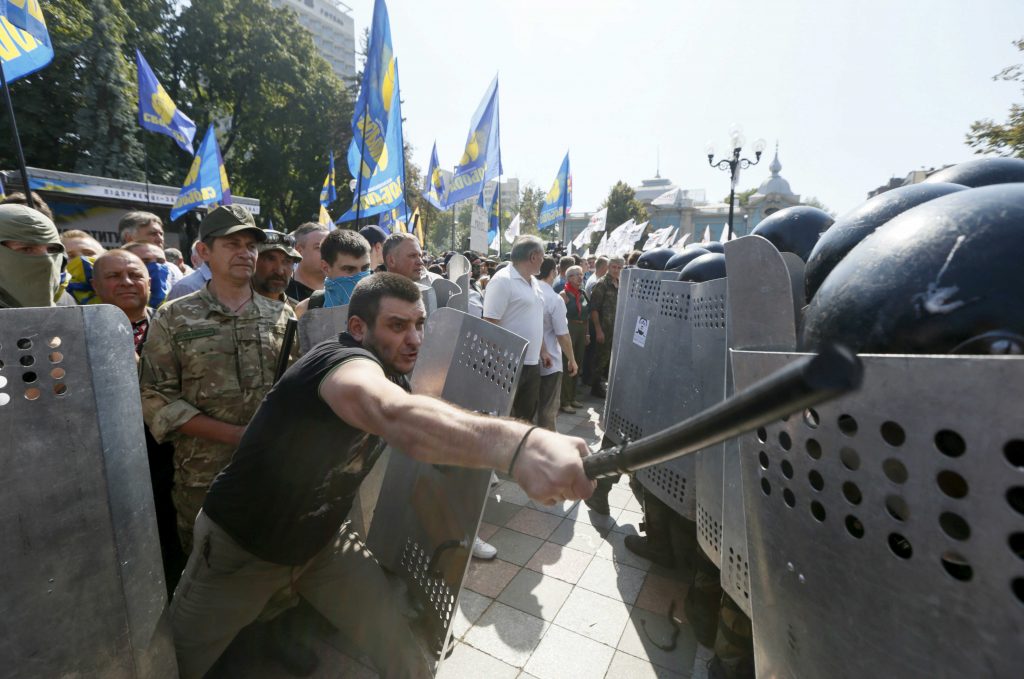 Editor’s Note: On June 22, Ambassador John Herbst and David Kramer debated whether we should bury the Minsk agreement, the troubled ceasefire agreement in Ukraine, at an Atlantic Council event in Washington, DC. Their remarks have been adapted from the debate.

The Minsk ceasefire agreement, signed February 15, 2015, by the leaders of Russia, Ukraine, Germany, and France, along with representatives from the OSCE and from Russian-occupied areas of Donetsk and Luhansk (DNR and LNR, respectively), is simply not working. It is time to scrap it and make clear to Russia, through a declaration from Western nations, that sanctions will remain in place—and will be increased over time—unless Russia meets several key conditions. These include withdrawal of its forces and weapons from Ukraine (including Crimea), respect of Ukraine’s sovereignty and territorial integrity, control of the border restored to Ukrainian authorities, and the return to Ukraine of those citizens it kidnapped from Ukrainian territory. Further negotiations with Moscow are pointless given that Russian officials won’t even acknowledge the presence of their forces on Ukrainian soil.

There have not been any new sanctions imposed on Russia despite its failure to live up to a single condition under the Minsk accord. Instead, a number of European leaders, led by German Foreign Minister Frank-Walter Steinmeier and Vice Chancellor Sigmar Gabriel, along with the French parliament and others, have irresponsibly called for an easing if not outright lifting of sanctions. Without German Chancellor Angela Merkel, renewal of EU sanctions would be in jeopardy.

Defenders of Minsk argue it has reduced the fighting. In fact, more than four thousand Ukrainians have been killed since the second Minsk deal was signed last year, almost half the number of total casualties since Russia invaded Ukraine in late February 2014. A serious uptick in fighting in the past two months further belies the claim that Minsk has preserved the peace.

In addition, defenders of the deal claim it is “the only act in town.” The same could have been said after the first Minsk deal was signed in September 2014, but five months later it was replaced with an even worse deal. In fact, such claims are excuses for not engaging in the necessary, albeit difficult, work of coming up with an innovative alternative to Minsk. This would require involvement at the presidential level in the United States, and President Barack Obama, regrettably, has shown little interest in such engagement, delegating instead responsibility for resolving the crisis to Merkel.

Ukraine signed Minsk and therefore must abide by it, the deal’s defenders further claim. Of course, the United States and United Kingdom, as well as Russia, signed the 1994 Budapest Memorandum—a deal that actually worked in convincing Ukraine to relinquish its Soviet-inherited nuclear weapons in exchange for the other signatories’ respect for its sovereignty and territorial integrity. But nobody in official positions other than Ukrainians raises the Budapest Memorandum these days.

Moreover, Minsk forced Ukrainian President Petro Poroshenko, under tremendous pressure as Russian forces were surrounding Debaltseve, to commit to something that only the Ukrainian parliament can do—namely, pass a constitutional amendment and legislative reform paving the way for local elections in the DNR and LNR. Poroshenko simply doesn’t have the votes in the Rada to pass the constitutional amendment, which requires three hundred votes. Four people were killed demonstrating against the Rada’s consideration of such legislation last August, reflecting the highly sensitive issue this is for Ukraine.

The most cogent argument for maintaining Minsk is that the only way to keep the Europeans on board with sanctions is by demonstrating Russian noncompliance with the accord’s provisions. The problem with this argument, however, is that Minsk is also being used to pressure Ukraine into passing the legislation and amendments for local elections in the DNR and LNR. This Western pressure on Kyiv should cease.

Ukraine does not control the DNR and LNR regions; how can it possibly pass legislation, even provisionally, calling for local elections there? What about the 1.7 million displaced people—will they get an opportunity to participate in the elections? According to the Minsk deal, elections in these regions are to be conducted “in accordance with Ukrainian legislation” and “in accordance with relevant OSCE standards and monitored by OSCE/ODIHR.” How can this be when Russia controls this region and the fighting hasn’t stopped?

Even if the West were to stop pressuring Ukraine about the local elections, the Minsk deal still suffers from fatal flaws. For example, it:

Fifteen months is long enough to conclude that the Minsk deal is not working to end the violence or resolve the conflict, and new ways should be found to keep the Europeans on board with sanctions—or, failing that, to move ahead unilaterally with additional US sanctions. That would require stronger American presidential leadership, however, and that is unlikely until next January, at best.

David J. Kramer is the senior director for human rights and democracy at the McCain Institute for International Leadership in Washington, DC, and was Assistant Secretary of State for Democracy, Human Rights and Labor in the George W. Bush administration.

Image: Demonstrators, who are against a constitutional amendment on decentralization, clash with police outside the parliament building in Kyiv, Ukraine, August 31, 2015. Ukraine's parliament voted for constitutional changes to give separatist-minded eastern regions a special status - but divisions in the pro-Western camp and violent street protests suggested the changes would face a rougher ride to become law. REUTERS/Valentyn Ogirenko