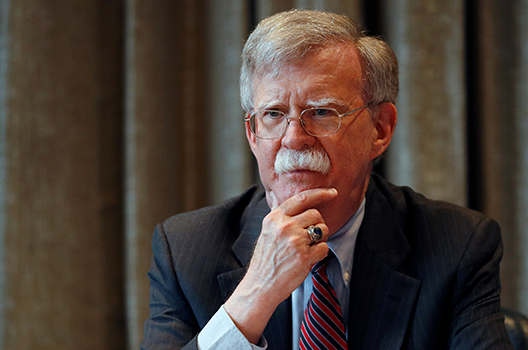 US National Security Advisor John Bolton will be leaving his post, according to a September 10 tweet from US President Donald J. Trump.

The US president said that he “informed John Bolton [on September 9] that his services are no longer needed at the White House.” Trump continued that he “disagreed strongly with many of his suggestions, as did others in the administration, and therefore I asked John for his resignation.”

Bolton responded that he had “offered to resign” but that Trump had not informed him that it was accepted.

Bolton was believed to have clashed with other White House officials and US Secretary of State Mike Pompeo on a range of issues, including the US president’s willingness to meet with US adversaries like North Korean leader Kim Jong-un and Iranian President Hassan Rouhani, as well as a now-cancelled meeting between US, Afghan, and Taliban officials at Camp David, which was meant to solidify a peace deal between the United States and the Taliban. Trump announced on September 9 that the prospects for a peace deal were “dead” following a September 5 Taliban bombing in Kabul that killed a US solider and eleven others.

“Bolton’s departure was only a matter of time. Still, the timing is ironic, coming after Trump’s termination of negotiations with the Taliban on which Bolton was right to be skeptical.

“Bolton’s exit may lead to a more realistic, step-by-step approach to North Korean denuclearization, where Bolton’s ‘all or nothing’ approach to easing sanctions has produced a deadlock despite three Trump-Kim summits.

“More worrisome is the possibility that the departure of Bolton, a harsh critic of Putin and one the administration’s strongest backers of Ukraine’s sovereignty and independence, could strengthen Trump’s inclination to curtail military support for Kyiv at a time when Ukrainian President Volodymyr Zelenskyy needs more international backing, not less, following the controversial prisoner exchange.”

Barry Pavel, senior vice president, Arnold Kanter chair, and director of the Scowcroft Center for Strategy and Security at the Atlantic Council:

“This is an unsurprising move: President Trump campaigned on getting the United States out of wars (continuing President Barack Obama’s general approach), while Mr. Bolton is well-known for advocating very assertive foreign and defense policy positions across a wide array of major issues. Who comes next in this critical advisory position will be very important for determining the core US role in the world at the beginning of the 2020s.”

“Successful national security advisors are expert strategists, masters of the interagency policy making process, and retain the confidence of the president they serve. John Bolton has advocated for strategies considered extreme within his own administration, ran a dysfunctional and often nonexistent interagency policy making process, and eventually lost the confidence of the president—so it was always only a matter of time before he had to go.”

“John Bolton’s departure hopefully reins in the threats around any military intervention to remove Nicolás Maduro from power in Venezuela. This aggressive, confrontational approach only served to sow distrust among US allies around our intentions in supporting a democratic transition.

“What will be critical for Venezuela is that the next National Security Advisor works hand-in-hand with other US government agencies to advance a coordinated Venezuela policy that aligns the international community, puts new pressures on Maduro, assists the interim government, and keeps Venezuela’s future a nonpartisan issue in the United States.”

“With the removal of Ambassador Bolton and hints at other White House and administration departures, rumors will proliferate about chaos at the top. That is not how this should be viewed. These movements are simply the result of strategic planning within the Republican National Committee (RNC). Bolton was seen as an election liability because his rhetoric made Americans fear he would send their children to war. With elections next year, we can expect to see people step into these roles who the RNC believes will make Republicans feel reassured.”