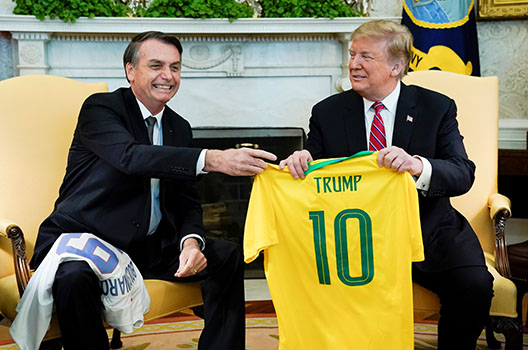 Brazilian President Jair Bolsonaro’s choice of the United States for his first official international visit as president did not come as a surprise given his vocal desire to reposition Brazil closer to the United States and his admiration for US President Donald J. Trump.

Bolsonaro was joined on his March 18-19 visit by six of his twenty-two ministers, including Economy Minister Paulo Guedes, Justice Minister Sérgio Moro, and Foreign Minister Ernesto Araújo. The Brazilians had a clear agenda: expand and deepen the areas of cooperation between the two largest economies in the Western hemisphere and gain the support Brazil needs to further attract trade and foreign direct investment.

Brazil’s accession to the OECD

At a joint press conference in the White House Rose Garden on March 19, Trump offered verbal support for Brazil’s accession to the Organisation for Economic Co-Operation and Development (OECD), a move particularly important to Brazil which is undergoing significant structural reforms that are key to its economic prosperity. While OECD membership would impose strict economic rules and standards on Brazil, effectively placing it on the same playing field as other OECD members, it would also provide legal certainty that would make the country more attractive to foreign investors. However, Brazil still faces lengthy OECD procedures of accession and must fulfill the standards needed for full membership.

Agreement for US space launches from Brazil

While in Washington, Brazilian Minister of Science and Technology Marcos Pontes and Araújo signed an agreement that allows US spacecraft to be launched from Brazil. This agreement is part of an effort to expand bilateral cooperation beyond trade, in areas of mutual interest. Launches from Brazil’s Alcântara Base are more cost effective for the United States. The agreement, if passed by Brazilian Congress, will allow for US-Brazil cooperation in the development of technologies for space launches and would help fund segments of Brazil’s space program.

Removal of Brazil’s visa restrictions on US citizens

Bolsonaro announced US citizens, along with citizens from Japan, Canada, and Australia, would no longer need visas to enter Brazil. Although the effects of lifting visa requirements on tourism and business are hard to measure, the move serves as a clear signal that Brazil is open to the rest of the world.

Both Trump and Bolsonaro reiterated their support for the interim government of Venezuela and condemned the Nicolás Maduro’s regime. Trump announced that the United States could impose tougher sanctions against Venezuela and affirmed that all options are being considered. Bolsonaro stood by Brazil’s more diplomatic stance. Brazil maintains communication with the Venezuelan military in an effort to convince it to end its support for Maduro.

Bolsonaro’s visit to Washington represents the beginning of a closer relationship between the United States and Brazil—one of the Brazilian president’s top campaign promises. The Brazilian government was successful in beginning discussions on expanding areas of cooperation with the United States and demonstrating to US companies that Brazil is open for business. Concrete outcomes from the US-Brazil relationship remain to be seen and could be overshadowed when Bolsonaro visits China later this year.

Overall, it was a positive visit, consistent with expectations and with minimal fireworks.

Valentina Sader is a project assistant in the Atlantic Council’s Adrienne Arsht Latin America Center. Follow her on Twitter @valentinasader.