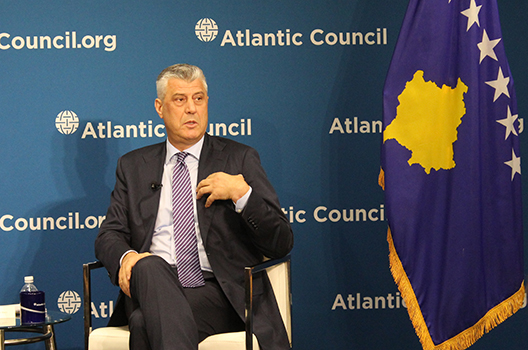 Kosovo’s president, Hashim Thaçi, reaffirmed his commitment to a peace agreement with Serbia at the Atlantic Council on November 30 saying a successful deal would have “transformative power” for his country and the region.

“Our institutions will finally have to focus on internal reforms: the fight against corruption and crime, jobs and the economy,” Thaçi said.

“Finally, a chance for new leadership will emerge. A leadership that will only work for the future,” he added.

Thaçi even alluded to a day when “boys and girls from Kosovo and boys and girls from Serbia [would serve] in multinational missions around the world,” in the same way former European foes served alongside each other in Kosovo throughout the last two decades.

Kosovo declared independence from Serbia in 2008 and is recognized by more than 110 countries. Kosovar independence followed a conflict with Serbia from 1998 to 1999 that eventually saw NATO forces launch an air campaign against Belgrade.

Both Kosovo and Serbia now have their sights set on EU and NATO membership, but must first come to a formal peace agreement and normalize relations. Although “both sides seem to be ready and willing to reach an agreement,” Thaçi said, “we need to move forward now without hesitation.”

While committing that “there would be no borders along ethnic lines, no exchange of population and no displacement of people,” Thaçi argued that “part of this agreement should be actually drawing the border between the two countries.”

The agreement would “maintain the multiethnic spirit and reality of Kosovo and Serbia,” wholeheartedly rejecting the “ridiculous” idea of “peaceful ethnic cleansing,” according to Thaçi.

While US National Security Advisor John Bolton has maintained that Washington would be comfortable with land swaps as part of a larger peace deal, many fear that border adjustments could reignite violence in the border villages.

In a September interview with the New Atlanticist, Kosovo’s prime minister, Ramush Haradinaj, argued that the “rhetoric [about land swaps] has created an environment that is hostile to a solution.”

Haradinaj doubled down on his criticism of the swaps in a November 28 op-ed in The Washington Post accusing Vučić of only recognizing Kosovo “if we give [Serbia] part of our territory.”

Thaçi was clear that “in terms of the agreement, nothing is agreed to yet,” but pushed back on the idea that limited land swaps should be off the table. He argued that there was no “example where two countries have reached a peace agreement without sitting down and defining where the border is between them.” He pointed to recent Kosovo negotiations with Montenegro, which clearly defined the borders and received the support of Kosovo’s parliament.

Thaçi dismissed what some see as an effort by Haradinaj to pressure him out of supporting the land swaps. “I don’t know a case anywhere in the world where two countries after a centuries-old conflict reached a peace agreement with 100 percent support of their own constituents,” Thaçi said.

He strongly pushed back on those who say that in pursuing a deal with Belgrade he has “[forgotten] that Serbia has killed 13,000 Albanian civilians in Kosovo. They are mistaken—I have not forgotten. I have not forgotten about 20,000 victims of sexual violence.” But, he argued, in a negotiation as difficult as his current talks with Belgrade, “you have to make a compromise even if you are 100 percent right.”

Thaçi’s visit to Washington, which also included meetings with US Secretary of State Mike Pompeo and Bolton, came just days after Haradinaj’s government drew the ire of Vučić and EU leaders by imposing 100 percent tariffs on Serbian goods entering Kosovo. The tariffs were justified, Haradinaj claimed, due to Serbia’s campaign to block Kosovo from Interpol and the recent string of nations who have unrecognized Kosovo.

While not directly criticizing Haradinaj’s moves, Thaçi maintained that the way to avoid the “fights, disagreements, and attempts to block each other,” was by pursuing a compressive peace deal.

“In these current circumstances, no one is a winner,” Thaçi explained, and “the EU has told us very clearly that they will not take us inside [the Union] until we resolve all the open issues.”

Thaçi was confident that a comprehensive deal would greenlight Kosovo’s admittance to Interpol, the United Nations, and other international organizations, as well as clearly the way for EU and NATO membership. “In the Balkans,” Thaçi said, “you either move forward or backward. The status quo never stands.”

According to Damon Wilson, executive vice president of the Atlantic Council and the event’s moderator, Serbia and Kosovo’s potential is a “story of former adversaries becoming allies [and] is the powerful story that stands behind Europe’s story and NATO’s story.”