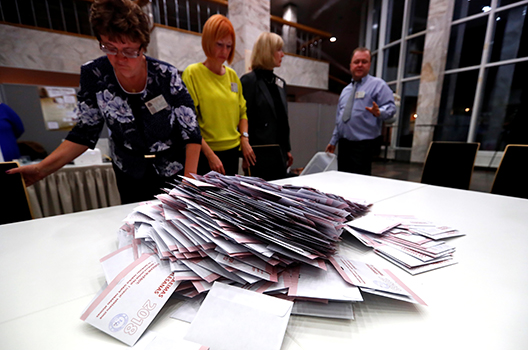 In the early hours of October 7, it became clear that Latvia had followed in the footsteps of many of its European neighbors. The newly-elected parliament was fragmented, the ruling coalition had lost its majority, and populist parties enjoyed significant gains. Latvian voters demonstrated widespread disillusionment with politicians and politics in general—compared to 2014, turnout in the parliamentary elections on October 6 dropped by nearly five percentage points, a record low since the country regained its independence twenty-seven years ago. Most worryingly, all this happened amidst healthy economic growth.

The election campaign was full of partisan noise but lacked substantial policy debate. Populist rhetoric and feelings of discontent dominated discussions, with candidates skilfully using every opportunity to criticize the government, the political elite, and even journalists. The campaign was polarizing, often filled with ad hominem attacks and harsh criticism of competitors, despite the fact that many of the candidates had quite recently been members of the same party.

Founded and unfounded allegations were made—leaked to journalists and published on social media—only to be proven untrue by authorities. Rhetorical salvos flew from the political newcomers: KPV LV (Who owns the State?), the New Conservative Party, For Development, and the Progressives Party. Each of these parties embraced one form of populism or another—with some using a more refined style of communication than others. All the newcomers did, however, advocate for policies favoring the rule of law and greater transparency in decision making. Their rhetoric, however, has significantly changed since the election.

Ultimately, it was the challengers—KPV LV, the New Conservative Party, and For Development—that gained most in this election.

The parties of the ruling coalition—Union of Greens and Farmers, Unity, and the National Alliance—failed to champion their agenda and clearly communicate their achievements from the past few years. They failed to capitalize on the growing economy and the stunning 8.4 percent year-on-year increase in wages. Only one of the coalition partners, the National Alliance, won a significant number of seats. The center-right Union of Greens and Farmers— incumbent Prime Minister Māris Kučinskis’ party—lost almost half its seats, and the liberal-conservative New Unity, the successor of Unity, which was nearly torn apart by political scandals, only retained eight of the twenty-three seats it held in the last parliament. The perceived inefficiency of the government and a preference for new faces in Latvia’s politics likely contributed to the downfall of these governing parties.

The pro-Russian party, Harmony, recruited a range of popular politicians with an ethnic Latvian background in an apparent effort to expand the party’s base during the campaign. The party also invested significantly in trying to change its image from a pro-Russian party to a social democratic party with pro-Western and pro-NATO views. These moves, ultimately, were unsuccessful, as their rhetoric differed significantly from their actions. Their election results, once again, indicate the gradual decline of the party’s popularity as its results have been steadily dropping over the years both on the national and municipal level.

The newly elected parliament is very fragmented and still—a month and a half after the election—is unable to produce a stable government, a phenomenon also seen in other European countries this year.

The arrival of new players has not changed a fundamental tenet of Latvian parliamentary politics—Harmony is not considered a potential coalition partner for the other parties due to its pro-Kremlin policies and longstanding cooperation with Russian President Vladimir Putin’s United Russia party.

All three newcomers—the New Conservative Party, KPV LV, and For Development—would like to lead the next government.

The Latvian President Raimonds Vejonis nominated Janis Bordans, the leader of the New Conservative Party, as prime minister last week and gave him a deadline of November 21 to form a government. But unable to overcome the divisiveness of the campaign, Bordans abandoned his attempt to form a government on November 14 after three potential coalition partners pulled out of talks. For Development has called on the president to nominate a new candidate for the job of prime minister. The president has now given the parties time until November 27 to try to form a government on their own and has not nominated a new prime minister. In the meantime, last week the Latvian Saeima made numerous decisions on electing parliamentary committees. On November 7, the Presidium was elected, and, for the first time in Latvian history, three of the highest posts in the Parliament will be held by women – Inara Murniece (National Alliance) as the Saeima speaker and Dagmara Beitnere-Le Galla (New Conservative Party) and Inese Libina-Egnere (New Unity) as Saeima vice-speakers.

It is clear that efforts to build a large coalition consisting of five or six parties will be complicated by the significant policy divergences between potential coalition members and each party’s red lines. The ruling coalition will have to include extremely diverse ideological positions and attitudes toward the European Union, with some defending deeper European integration and others opposing any federalization of Europe. The situation is further complicated by the fact that the majority—around 60 percent of possible coalition members of parliament—have little to no political experience and some lack even basic knowledge of parliamentary procedure.

These government negotiations have already proved to be the most complicated since 1995, with all the parties so evenly placed that there is no one in a position to strongly take on leadership. The talks will probably be slow. If the parties are unable to form a government there are three potential scenarios going forward.

First, the president could invite a non-newcomer party to try to form a government—likely excluding at least one of the new parties.

Second, the president could invite a non-partisan candidate to be prime minister who would be able to consolidate politicians from different parties (this happened in 1995). However, there is no obvious non-partisan figure available and an apolitical figure can only be offered once all possible political options have been exhausted.

Third, Latvia could have a snap election. The country can live with a technocratic government for a while, as snap elections are only possible by 2020 at the earliest, which means that the thirteenth Saeima, Latvia’s parliament, will have to work for at least a year.

There was hope that the additional source of urgency—the November 18 centenary of Latvian independence from the Russian empire—would be a positive push for the parties to agree on a coalition and a new government. Most Latvians would have preferred to celebrate the centenary of their statehood with a newly appointed government. This wish was not to be fulfilled, and Latvia has already gone into its new century with much uncertainty.

Rihards Kols is a member of Latvia’s parliament (Saeima) representing the National Alliance. He is chairman of the Foreign Affairs Committee and a representative of the Saeima at the Organization for Economic Co-operation and Development (OECD). He is also an Atlantic Council Millennium Fellow.