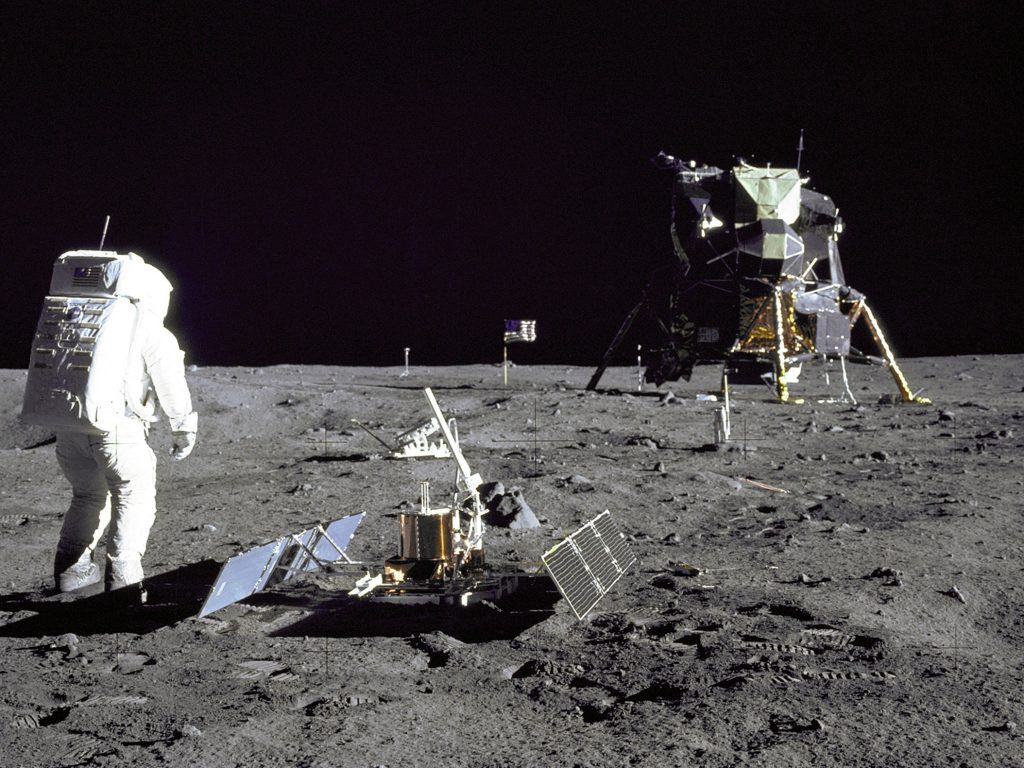 As the captivating 50th anniversary of the Apollo 11 moon landing recedes into memory and the momentary nostalgia for space exploration dims, many in Washington will forget the lessons of Apollo. But in an era of increased geopolitical turbulence, this would be a grave mistake.

The Apollo moon landing was not only a momentous scientific achievement, but also a grand strategic instrument of the Cold War. It symbolized the innovation of America’s capitalist society and, perhaps most importantly, it signaled the willingness and ability of the US industrial base to generate the aerospace and defense capabilities needed to compete effectively with the Soviet Union. As the United States now embarks upon a renewed era of great-power competition with Russia and China, it must pursue new projects in the ambitious spirit of Apollo 11, ones which will leverage industry, animate public imagination, and signal the decisive resolve to act.

The role of the aerospace and defense industry in Apollo has often been underappreciated, but was indispensable. This relatively unremarked role was the primary focus of the Atlantic Council’s Captains of Industry event on “The Aerospace Industry’s Contributions to Apollo” on July 18. There, Dr. Teasel Muir-Harmony, the curator of Apollo Spacecraft at the National Air and Space Museum, reminded us that the purpose of Apollo was to “demonstrate American industry [and] the robustness of a capitalist society…That was going to be critical to fighting the Cold War.”

Many would interpret Apollo as an instrument of soft power; the United States needed to prove that capitalism was more innovative than communism. While true, however, this perspective fails to grasp the whole picture. According to Muir-Harmony, Apollo was also a product of the Kennedy administration’s discussions with the Department of Defense about what such a space program would signal internationally. Ultimately, US President John F. Kennedy chose the moon landing as a goal, not only because it was scientifically impressive, but because it would demonstrate a specific class of technologies and capabilities which could also be applied to the defense sphere. It was about both soft and hard power.

This geostrategic signal was essential. Throughout the early years of the Cold War, the United States constructed a postwar international order and sought to defend it from a revisionist Soviet Union, both through economic aid like the Marshall Plan and through alliance networks like NATO. But the will to compete, and to extend deterrence on behalf of allies and partners, required military capabilities to underpin that posture. By orchestrating industrial actors to pursue a goal as ambitious as Apollo, Kennedy and subsequent presidents leveraged the US industrial base as a means of demonstrating those capabilities and competing militarily.

Currently, the United States lags behind China in government-industry collaboration, as Beijing exploits its autocratic systems to centralize industrial production. For example, while Google refused to continue working with the Pentagon on artificial intelligence after Project Maven, China guides its own national champions like Huawei, allowing it to accrue a comparative advantage in applied research and in bringing products to market.

The United States’ market-driven, entrepreneurial industrial base, however, still possesses profound innovative potential, especially if galvanized around specific issue areas. It is therefore imperative for the US government to engage and animate its industrial base today, just as it did fifty years ago with Apollo.

Thus, the United States needs to be back in the business of large-scale scientific projects. And, like fifty years ago, what domain is more captivating for such a project than space itself, and especially human spaceflight? The great irony of human spaceflight, however, is that for virtually every task in space exploration, crewless, robotic probes can do the job either better or cheaper than humans—and usually both. What then justifies taking on once more the relatively higher financial cost and risk of human life inherent in crewed missions? The direct military and economic value of human spaceflight is at best corollary and, according to some experts, totally discredited. Instead, US political leaders should consider the industrial-strength signaling mechanism discussed above, and the concept of soft power more generally, in selecting future missions.

NASA’s current Mars-via-Moon plan for human spaceflight cleverly threads the needle among furthering international cooperation, incentivizing US industry’s leadership in commercial deep space, and generating iconic moments that demonstrate US world leadership. NASA plans to land astronauts on Mars, after re-mastering human spaceflight skills by landing on the Moon. Mars is a far more substantial challenge than the Moon. In preparation, instead of the brief stays on the lunar surface (totaling a mere eighty hours over the course of the entire Apollo program), NASA plans to assemble a lunar orbiter which will allow future astronauts to ascend and descend to the lunar surface in relative ease. This lunar Gateway will be assembled in collaboration by the International Space Station partners—NASA and the European, Canadian, Japanese, and Russian space agencies.

The Gateway will also provide opportunities to commercial space launch firms in the United States. The first three modules of the Gateway will be launched on commercial rockets. While commercial launch may seem routine in the era of smallsats and reusable launch vehicles, launching a payload beyond geosynchronous orbit and all 200,000-plus miles to the Moon is nearly unprecedented. Routine servicing of the Gateway would provide a consistent market for US rocket companies and their contractors that would sustain the space-industrial base for years to come.

Leveraging the national technology industrial base is one of the most crucial tasks for the United States in this renewed era of great-power competition, and the ambitious space missions above certainly contribute to that end. Fighting a near-peer competitor like Russia or China will require far more sophisticated and numerous capabilities than counterinsurgency or counterterrorism. Through further space exploration, the United States can increase the scale of industrial production in the aerospace and defense sector, signaling its ability to compete militarily and deter threats to the status quo.

Moreover, these projects demonstrate the United States’ commitment to leading groups of the most powerful nations in important tasks of a global scale, which is exactly what motivated Apollo-Soyuz and the International Space Station in the past. This wellspring of soft power, underpinned by its implications for hard power vis-à-vis great-power competitors, reinforces the centrality of the United States in the international order as well as the resolve to defend it.

Another small step for man, but a well-needed leap for the United States’ competitive edge.

Christian Trotti is a program assistant in the Atlantic Council’s Scowcroft Center for Strategy and Security.

Mark Massa is an intern with the Foresight, Strategy, and Risks Initiative in the Scowcroft Center.

Image: Astronaut Buzz Aldrin is pictured during the Apollo 11 extravehicular activity on the moon, July 29, 1969. (NASA/Handout via REUTERS)