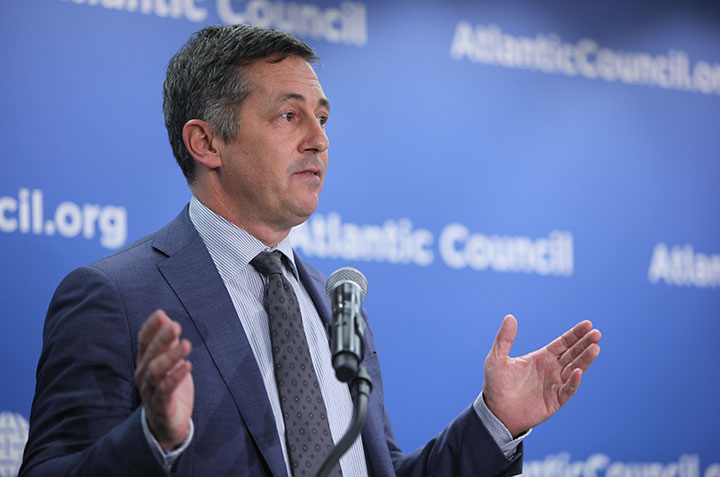 LGBTI rights sit at the very core of the United States’ human rights agenda, and diplomacy, in its many forms, “is an essential tool as we find a path towards greater inclusion,” according to Randy W. Berry, the US State Department’s first-ever Special Envoy for the Human Rights of LGBTI Persons.

Since the United States laid out its first-ever substantive strategy to promote the human rights of LGBT persons in a 2011 presidential memorandum, it has played a large role, along with its allies, in using public and bilateral diplomacy, as well as foreign aid, to promote and protect the rights of the global LGBTI community. However, while global change is underway, Berry admitted that “it is threatened by countervailing movements.”

In his keynote address, Berry outlined some of the successes the United States and its allies have had in the past five years in promoting and protecting LGBT rights, some persistent challenges, and the way forward as the United States seeks to map a path toward a more just, open, and accepting world.

“What motivates us is the chance to create great positive change in our world,” said Berry. “Frankly, that will come slower than any of us would like…but make no mistake, change is coming to our world.”

In particular, Berry noted three crucial principles for the protection and promotion of the human rights of LGBTI individuals: Leadership and visibility, partnerships, and approach.

Leadership and visibility, particularly that of the diplomatic community, as noted by the panelists, have proven key to the dramatic shifts in public policy and public perceptions over the past few years.

With LGBT rights now being a core component of US foreign policy, diplomats have a platform to talk to foreign governments, business leaders, and civil society actors and bring LGBT issues to the forefront of those discussions.

Hannan noted that her status as an LGBT community member is today seen as an asset. “It is seen as a positive,” she said, “I was bringing diversity and value to the job.”

Berry said that visibility is “perhaps the single-most important act a person can take.” He referenced a former head of state who recently changed his position on LGBT issues after hearing “a simple coming out story.”

Berry emphasized the need for broad partnerships that stretch beyond the diplomatic corps when promoting LGBT rights around the world.

“This is a global issue, and it demands a global response,” said Berry, citing such examples as: the LGBT Core Group at the United Nations, which currently includes twenty-four countries and one observer state; the Global Equality Fund, a growing alliance of likeminded governments, businesses, and foundations that supports struggling civil society organizations in fifty countries worldwide; and the work of business leaders and civil society organizations to engage in LGBT issues.

“Our success lies…considerably in our ability to build, encourage, maintain, and support, these coalitions,” said Berry, emphasizing that the United States does not seek to lead these coalitions, but rather, “to act in concert with our partners, both as their supporters and their equal.”

Patel underlined the importance of public-private partnerships. “When you can get the private sector and the public sector to work together on these issues, I think you’ve got a longevity that last beyond administrations,” she said.

While direct engagement and diplomatic might are most certainly necessary when promoting LGBT rights, the panel emphasized the need to be creative.

Berry referenced US Ambassador to the United Nations, Samantha Power, who recently took several of her UN counterparts to the Broadway musical Fun Home, as someone who is actively promoting LGBT rights in a creative way, bringing LGBT issues to the forefront of the conversation while staying nimble in her approach.

The panel also highlighted the need to do more, particularly in efforts to promote and protect the rights of transgender and gender non-conforming individuals.

In response to countervailing movements and the “backlash” that has resulted from more active engagement from the diplomatic community and others on LGBT issues, Berry stressed the need for attention and smart action in these “crisis spots.”

“We try to do no harm, but we should never confuse that with doing nothing,” said Berry.

Jonathan Gass is a development assistant at the Atlantic Council.

Image: “What motivates us is the chance to create great positive change in our world,” Randy W. Berry, the US State Department’s first-ever Special Envoy for the Human Rights of LGBTI Persons, said in his keynote address at the “LGBT Diplomacy: Securing a More Inclusive Future” event at the Atlantic Council on March 14. “Frankly, that will come slower than any of us would like…but make no mistake, change is coming to our world,” he added. (Atlantic Council/Victoria Langton)