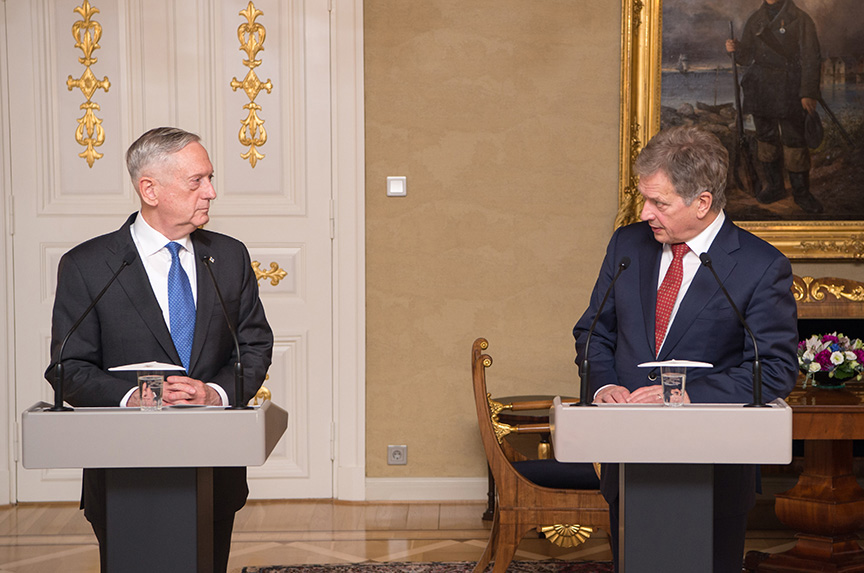 The new European Center of Excellence for Countering Hybrid Threats (CoE) in Helsinki is, according to US Secretary of Defense James Mattis, an “institution fit for our times.”

With membership from eleven European Union (EU) nations and the United States, the CoE is one of the most tangible examples of the pledge by NATO and the EU to work more closely together, addressing what both organizations recognize is a threat to their very foundations. Mattis visited the center in Finland last week.

So far, Estonia, France, Germany, Latvia, Lithuania, Norway, Poland, Spain, Sweden, the United Kingdom, and the United States have joined the center, which will focus on gathering and sharing expertise on improving civil-military capabilities and preparedness for hybrid challenges.

As the country with the longest border with Russia (830 miles), Finland has a great deal of experience to draw on when it comes to managing the intrusive nature of its huge neighbor. “Here in this Helsinki center, the shared concerns of our transatlantic democracies can be researched and addressed in a collaborative manner, each of us learning from the other and building resistance to those with malign intent toward our democracies,” Mattis told Finnish President Sauli Niinistö. “Even after a hundred years of freedom, this country shows no complacency.  Rather, you demonstrate that you are serious about the defense of your freedom and independence.”

Mattis was just the latest in a string of dignitaries visiting and praising the creation of the facility and its host country. NATO Secretary General Jens Stoltenberg and EU High Representative Federica Mogherini flew in to participate in the official inauguration in October.

Finland’s past enriches its future

Hanna Smith, the CoE’s director of strategic planning and responses, smiled when asked how it feels for her country, which in Cold War years was sometimes criticized for its approach to Russia, to now be recognized and sought after for advice. “Of course, it feels good,” she said. “I do think that the Finnish model, relating to this kind of comprehensive-security way of looking at it, integrated responses, is something quite unique and there is quite a lot that others could learn from that.”

Finland has received much attention lately for what it calls its “whole-of -society” approach to fostering resilience to hybrid threats. As one example of national buy in, a large swathe of the 5.4 million Finns, from chief executive officers to schoolteachers to first responders to garbage collectors participate in voluntary training courses with crisis-management experts on how to keep the country running in case of an attack or even a natural disaster. Cities also require large buildings to maintain underground bunkers that, together with those provided by the Ministry of the Interior,  could support the majority of the urban population for a limited time in case of an emergency.

This system, obviously, was not just invented in reaction to Russia’s most recent efforts to use all tools at its disposal to wreak political havoc in other countries. “I think it’s something to do with the fact that we first were five hundred years under Swedish rule and then a little bit over a hundred years under Russian rule,” Smith explained. “So,” she added, “there is that kind of a feeling of unity of the people, the way of surviving basically. In security studies, everybody knows that things are starting to work when there is a fight for survival.”

Smith said the approach even includes teaching schoolchildren as young as ten how to spot “fake news.” It works; Moscow set up a Finnish-language service of Sputnik, one of its state-funded information outlets, but it closed in 2016 after less than a year due to lack of interest from Finns.

However, Smith was emphatic that the hybrid-threat challenge is by no means just about Russia. “We have a lot of non-state actors also which in fact can be sometimes more threatening than state actors,” she underscored. “In this current new environment, it’s probably going to be tested whether, with a non-state actor against a non-state actor, the model is sufficient. That is precisely the thing that we need to be looking at more carefully and actually thinking about.”

The CoE will conduct training courses, provide research to policymakers and extend its expertise to “communities of interest” and practitioners. Smith has just published the center’s first strategic analysis, examining “power dynamics in the international system and particularly how networks are exploited by weaker powers to pursue their political goals.”

Smith said it is exciting to look for new vulnerabilities and examine the connection between different kinds of threats that face all of Europe and the United States. This small country perched at the far north of Europe has quite the viewpoint. “We have something to offer, something to add, but it’s not an answer to everything,” Smith said.

“That’s why we need an international center to work together with several other countries and with the EU and NATO as institutions,” she said, adding: “That makes the team.”

Image: US Secretary of Defense James Mattis and Finnish President Sauli Niinistö spoke to the media at the Presidential Palace in Helsinki, Finland, on Nov. 6. (US Department of Defense/US Air Force Staff Sgt. Jette Carr)