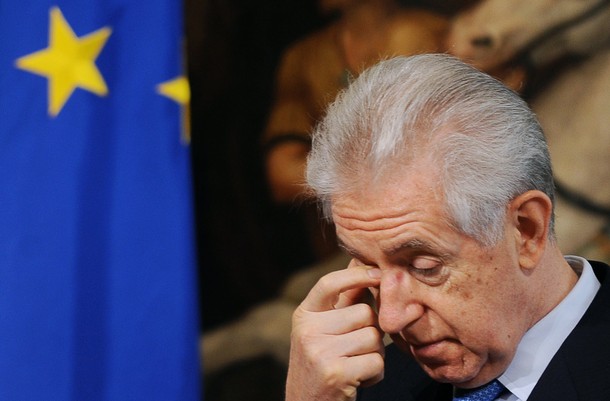 “Beware the ides of March” a Soothsayer warns Caesar. Marius Montius Caesar is made Dictator of the Roman Republic to save the Republic in the name of the Republic. Critical is the support Caesar enjoys from the heads of the two leading families of the Empire, Angela Portia Merkela, formerly of the Germanic tribe, and Nicholatus Minimus Sarkozius, formerly of Gaul. Silvius Brutus Berlisconius, who has been deposed by Marius as leader of the corrupt, bloated Senate, plots his revenge. He utters bitterly, “I do fear the people choose Caesar for their king. I was born free as Caesar, and this man is now become a god”. The Roman die is cast.

Brutus Berlisconius, one time friend of Caesar, is all too conscious that his electoral chances depend on his playing to the fears of the Plebs now gathering in their uneasy impotence on the Appenine Hill across the deep valley of the Circo Massimo from the Capitoline where this great drama is unfolding. Caesar, gripped by the acute vulnerability of his position, has a vision of the fate that awaits him. Fatalistically he accepts that death “will come when it will come”. So, charged with his duty to save Rome from itself Caesar goes to the Senate to explain his plan.

Caesar is slain. As Brutus Berlisconius plunges a bloody dagger into Caesar the Dictator utters his final words, “Et tu, Brute”. “Friends, Romans, countrymen, lend me your ears”, cries Brutus Berlisconius, “I come here to bury Caesar, not to praise him”. Romans, he warns, would have been slaves under Caesar, before he departs to his luxury island for a party.

Italian Prime Minister Mario Monti is no Julius Caesar. He is a good man in a terrible position at a terrible time. However, his political (hopefully not personal) fate could be similar if he does not succeed in what is an almost impossible task – to drive down Italy’s public debt. As I walk the streets of this magnificent city and talk to Romans the mood here is one of uneasy calm. The Italian debt hangs in the air like a gathering Shakespearean storm. The atmosphere is unworldly; a heavy calm before a cataclysmic social and political upheaval. Either Hannibal will bypass the city or the market barbarians will storm the ramparts. Cannae or Carthage?

My sources tell me that Monti sees himself being in power for no longer than one more year. He believes that not only will elections be necessary by then but that he and his technocratic government will have done all they can to stabilize Italy’s finances. If truth be told a year is probably nothing like enough time. Italy is a country wedded to debt. And, just like Caesar before him it was the failure of a corrupt political class that put the Republic in danger. Indeed, Italy’s politicians have traditionally survived on a system of patronage which has encouraged over-mighty subjects and special interest groups. Europe and the Eurozone was seen by many of them merely as a means to extend patronage via the cheap money that the Euro afforded. Indeed, the moment France and Germany broke the Euro’s stringent rules it became open season for many in the Italian elite to use government to over-spend.

Therefore, Monti faces a terrible choice. If he does indeed go in a year or so and hands power back to a political class that shows little or no sign that it will mend its ways financial oblivion will beckon and Monti will be accused of a dereliction of duty. However, if Monti hangs onto power indefinitely he will be accused of being a latter day Caesar hell bent on destroying the ancient virtues and freedoms of the Republic. Italy, far more than Greece, will be the true test as to whether or not the Euro’s empire can survive the assault by the market barbarians. And, of course, Brutus Berlisconius waits in the wings.

Italy is a serious country with serious people who have deserved far better from their past leaders. In my years living in Florence, speaking the language, studying the place and the people I was constantly struck by the daily battle that was fought out between the state and the people. It is a battle that continues apace. It is now one in which the future of Europe not just Italy is at stake. The Italian people deserve our support…and our vigilance.

As for the Eurozone crisis, the ides of March may indeed have come. “Ay, Caesar, but not gone”.