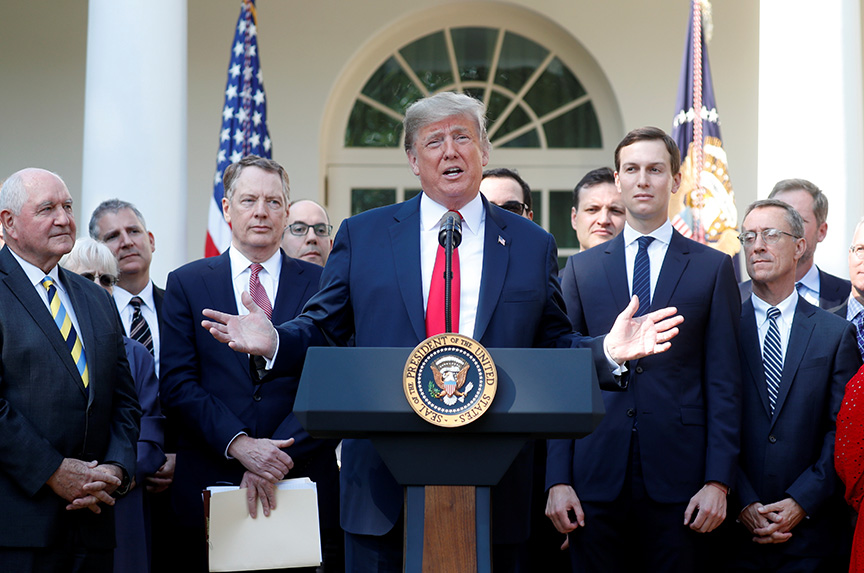 Canada agreed, moments before the clock ran out on a September 30 deadline, to sign on to a trade agreement between the United States and Mexico that would replace the North American Free Trade Agreement (NAFTA). The new agreement will be known as the United States-Mexico-Canada Agreement or USMCA.

US President Donald J. Trump announced the deal at the White House on October 1 describing it as a “brand new deal to terminate and replace NAFTA.” With this breakthrough, Trump has fulfilled his campaign promise to rewrite NAFTA, which he has called “the worst trade deal in history.” The new agreement was negotiated “on the principle of fairness and reciprocity,” said Trump.

Earlier, Trump tweeted that the deal was a “historic transaction.” It is a “great deal for all three countries, solves the many deficiencies and mistakes in NAFTA, greatly opens markets to our farmers and manufacturers, reduces trade barriers to the United States and will bring all three great nations together in competition with the rest of the world,” he added.

US Trade Representative Robert Lighthizer and Canadian Foreign Affairs Minister Chrystia Freeland said in a joint statement that the new agreement will: “strengthen the middle class, and create good, well-paying jobs and new opportunities for the nearly half billion people who call North America home.”

Despite the breakthrough, the steel and aluminum tariffs placed by the Trump administration on Canada and Mexico will remain in place.

The text of the agreement must now be sent to Congress. Congressional approval is far from given and the body is unlikely to vote on the deal before 2019.

The Trump administration has been eager to sign a new trade deal before Mexican President Enrique Peña Nieto leaves office on December 1. The United States and Mexico reached an agreement in August.

Atlantic Council analysts shared their thoughts on the new agreement. Here’s what they had to say:

What is the deal reached with Canada?

Bart Oosterveld, director of the Atlantic Council’s Global Business and Economics program: In a nutshell, it is a slightly updated version of NAFTA. Canada’s number one priority had been to preserve Chapter 19, the independent dispute resolution mechanism. Its preservation is a win for the global rule-based trade order, as a provision like it is a standard feature of modern trade agreements and over time prevents larger partners in a trade deal from imposing their economic will on smaller counterparts. The United States maintained the steel and aluminum tariffs on Canada, and gained some access to the protected Canadian dairy market.

Jason Marczak, director of the Atlantic Council’s Adrienne Arsht Latin America Center: The deal reached with Canada is a win for all three countries. It preserves many of the core aspects of NAFTA but also updates the twenty-five-year-old agreement to reflect advances in goods and services trade. Importantly for Canada—and for the rules-based system inherent in North American trade—NAFTA’s dispute settlement mechanism remains in place. It was taken out in the talks with Mexico, perhaps because it was long assumed that Canada would prioritize its eventual inclusion. The United States also gained dairy access, with Canada opening up the sector beyond levels it agreed to in the Trans-Pacific Partnership. The USCMA deal also eliminates the US-desired sunset provision, a win for investor certainty.

Marie Kasperek, associate director in the Atlantic Council’s Global Business and Economics program: While the opening up of the Canadian dairy market for American products is an important win for US farmers, Canada does not lose as much as the United States will win: Canada is giving the United States access to about 3.5 percent of its dairy market—not much more than it was already willing to concede (3.25 percent) to the United States if Trump had not pulled out of the Trans-Pacific Partnership (TPP).

Oosterveld: This will pass Congress because it is labor and energy friendly. There’s a parliamentary approval process in Canada as well that may take some time. My initial best guess is the deal goes into final effect sometime mid next year and replaces NAFTA then.

Marczak: Once signed on November 30, the US administration must send implementing legislation to Congress. At that point, TPA [Trade Promotion Authority] puts in place a number of procedural steps that must happen before a vote. A trilateral deal will be much easier to pass in the US Congress than a bilateral one. But it’s not a shoo-in. Importantly, a MORENA Congress in Mexico (the party of President-elect Lopez Obrador) will be in a better position to ratify the accord with it having the president-elect’s full support.

Katherine Pereira, associate director in the Atlantic Council’s Adrienne Arsht Latin America Center: The deal with Canada averts the expected blowback from lawmakers on both sides of the aisle who didn’t want to see a two-way deal that the Trump administration was threatening as late as last week. The new deal likely won’t be voted on by the US Congress until 2019 because it still has a number of procedural hurdles to clear under Trade Promotion Authority legislation, including an analysis by the US International Trade Commission.

How is USMCA different from NAFTA?

Marczak: The USMCA deal updates NAFTA in key areas. The major differences revolve around increasing auto content that must be produced in North America, putting in place minimum wages for the production of 40 percent of a car’s components, increasing US access to Canada’s dairy market, including new intellectual property protections, and phasing out investor-state dispute settlement except for certain key sectors.

Pereira: The deal provides improved access for US farmers to Canada’s dairy market.

There are tighter rules of origin for auto production.

Canada agreed to raise the threshold for applying duties to cross-border purchases, a key demand from the United States. Canada’s new so-called de minimis level will be C$150 ($117) for customs duties, up from C$20 now, and C$40 for sales taxes.

There are no changes related to “TN” visas for professional workers. Canada had wanted the list of eligible occupations expanded, while the United States had wanted it reduced; they settled on leaving it the same.

What would be some immediate and long-term implications of the new trade agreement?

Marczak: The USMCA deal will require some adjustments to North American supply chains but keeps the underlying framework in place. New regional content and auto wage rules will increase North American production, but it remains to be seen what the effect will be on global competitiveness.

Kasperek: The fact that both Canada and Mexico list the exemption from threatened car tariffs as one of their wins in the new deal makes the prospect of car tariffs for the rest of the world much more imminent. Should the United States decide to go ahead with car tariffs, both Mexico and Canada will have a quota in place that exceeds their current production.

Pereira: Canada and Mexico are exempt from US tariffs on foreign cars for national security reasons. If they exceed the 2.6-million-unit-a-year threshold they are no longer exempt. However, neither country has exported more than the 2.6 million.

Steel and aluminum tariffs remain in effect and will be dealt with separately. There is no timeline for removal.

Is the new deal worth the strain that was put on the US-Canada relationship?

Marczak: Negotiations are tough, and this negotiation was particularly challenging. But what is clear is that negotiators worked hard to get a deal—public sparring can hopefully be supplanted with continued praise and congratulations as we have seen in the first hours after the announcement.

Pereira: Politically, yes. This is a huge win for the Trump administration and Republicans heading into the midterm elections in November.

Economically, the stock market went up on news of the deal. It will take months and years to gauge the new agreement’s impact on jobs, investment, and the economy.