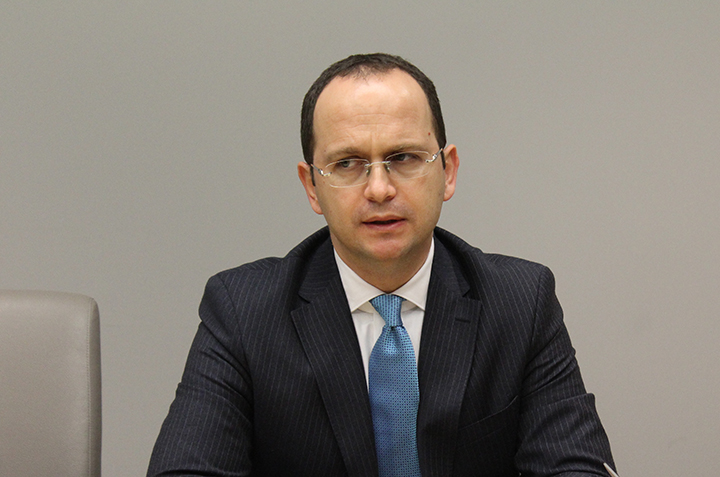 “Unfortunately, the migrant crisis, coupled with other crises that Europe is facing, has transformed enlargement policy into a second-tier issue,” Albanian Foreign Minister Ditmir Bushati said in an interview with the New Atlanticist at the Atlantic Council’s offices in Washington on February 25. (Atlantic Council/Susan Haigh)

The migrant crisis and the debate over the United Kingdom’s future in the European Union have shifted focus away from the enlargement of the bloc and this could disrupt the process of building democratic future member states, Albania’s Foreign Minister Ditmir Bushati said on February 25.

“Unfortunately, the migrant crisis, coupled with other crises that Europe is facing, has transformed enlargement policy into a second-tier issue,” Bushati said in an interview at the Atlantic Council’s offices in Washington.

The British debate, meanwhile, does not allow the EU to think in more strategic terms about how to deal with the Western Balkans to “complete and consolidate the unification project,” he added.

In the absence of a cohesive and coherent EU response to the migrant crisis, officials from Albania, eight other Balkan nations—Bosnia, Bulgaria, Croatia, Kosovo, Macedonia, Montenegro, Serbia, and Slovenia—and Austria announced their decision on February 24 to slow the entry of migrants into their countries. It is “not possible to process unlimited numbers of migrants and applicants for asylum,” they said, suggesting that a complete halt may be inevitable.

Bushati indicated that this might not be the case. “Closing borders would produce a chain effect in the neighboring country, but it would not necessarily address the root causes and the phenomenon we are all facing,” the Minister said.

The migrant crisis, the largest movement of people across Europe since World War II, has been sparked primarily by conflicts in Syria, Iraq, and Afghanistan. It has provoked a mixed reaction across Europe. While Germany has taken in hundreds of thousands of migrants, other European nations have been less welcoming—Hungary has erected a border fence, Austria has restricted to eighty the daily number of asylum seekers, and Macedonia has turned away Afghan migrants.

Building walls and fences is not the appropriate response, said Bushati.

A plan proposed by European Commission President Jean Claude Juncker to distribute 160,000 migrants across the twenty-eight-nation bloc has stalled amid opposition mainly from Eastern European countries. Hungarian Prime Minister Viktor Orbán wants to hold a referendum that asks Hungarians whether they will accept the EU imposing migrant quotas.

The migrant crisis threatens to lessen the appetite for European enlargement at a time when the European project is under considerable strain from a June 23 British referendum on whether the UK should remain in the EU, and Brussels’ preoccupation with saving the euro.

Signs that the so-called Brexit debate is having a knock-on effect have already started to emerge: Czech Prime Minister Bohuslav Sobotka predicted a similar discussion in his country about its future in the EU, and Serbian Prime Minister Aleksandar Vucic said the bloc has “lost its magic power.” There is a danger that this could lead to some countries falling back into Russia’s sphere of influence.

He said Albania is on a “sustainable track when it comes to the reform process.” He was hopeful that the European Commission will provide a clear recommendation on starting the accession talks.

On a brief visit to the Albanian capital, Tirana, on February 14, US Secretary of State John Kerry praised Albania for being on the “right track” toward European integration. Kerry said he was “impressed” by the passage of a law that would bar criminals from politics, and “encouraged” by a judicial reform package aimed at tackling corruption, a deep-rooted problem in the former Eastern Bloc nation.

Bushati’s visit to Washington comes just weeks before the 25th anniversary of the restoration of diplomatic ties between the United States and Albania. The US-Albania relationship has been forged in part by support from Albania, a NATO partner, for the Alliance’s mission in Afghanistan as well as the US-led anti-ISIS coalition. (Albania has provided military equipment and ammunition to Kurdish Peshmerga fighters.) The United States is providing Albania assistance with judicial reforms; and the two nations formalized a strategic partnership agreement in 2015.

Bushati said the fact that the Balkans today is at peace is testament to the success of US foreign policy.

Albanian Foreign Minister Ditmir Bushati spoke in an interview with the New Atlanticist’s Ashish Kumar Sen on a visit to the Atlantic Council’s offices in Washington on February 25. Here are excerpts from our interview.

Q: Albania, along with other Balkan nations and Austria, has declared that the migration flow along the Western Balkans route needs to be substantially reduced. Is it inevitable that Albania will eventually have to shut its borders to the migrants?

Bushati: This is an unprecedented crisis. It requires an all-inclusive response and solution because the current structures and legislation in place in Europe are not sufficient to respond to a crisis of this magnitude. Building fences and walls is not an appropriate solution. We have always believed that on one hand we need to address the root causes of the crisis and show strong signals of solidarity, and on the other we have to ensure the safety of the people and the security architecture of Europe.

Closing borders would produce a chain effect in the neighboring country, but it would not necessarily address the root causes and the phenomenon we are all facing. As we speak, Albania has not been affected by the refugee stream due to geography. The border with Greece and Macedonia is quite mountainous. We have also been working with Italy and the UNHCR, and have reinforced our surveillance mechanisms along the borders with Greece and Macedonia. At the same time, we have adapted a contingency plan in case we are affected by this phenomenon.

Q: Macedonia has restricted the migrants coming through its borders. It has, for example, turned back Afghans. Do you expect a fallout from this policy on Albania?

Bushati: Right now we don’t see a diversion of the route [taken by the migrants]. We are taking some preventive measures, first, on reinforcement of border control with Macedonia and Greece, and second, we are cooperating with Italy. We want to make sure this migration crisis is not accompanied by smuggling aspects that we have seen a decade ago in the Adriatic area where people from North Africa were using the Balkan route and Italy as a way to reach Northern Europe.

Registering migrants at the entry point is a very good thing. It goes along with the spirit of the Schengen and Dublin system, but one needs to take into account the magnitude of this crisis. The Schengen and Dublin system was meant to be implemented in normal times. We are living in times of crisis, so I wonder whether those mechanisms could serve us in addressing the current crisis.

Q: Are you concerned that Albania’s progress toward EU membership could stall because of two factors—first, the migrant crisis may reduce the appetite for enlargement, and the second, Brussels’ preoccupation with saving the euro?

Bushati: Unfortunately, the migrant crisis, coupled with other crises that Europe is facing, has transformed enlargement policy into a second-tier issue. Migration has become a tier-one issue. This could have disruptive effects on the democratic member state building process and consolidation in our area. We need to make sure that this crisis is seen also as an opportunity to further streamline cooperation between the EU and the Western Balkans.

Q: What progress has Albania made in its path toward the EU?

Bushati: We have been granted candidate status in June 2014 and now we are preparing to move toward the next step, which would be first to ensure a recommendation from the European Commission that would later be endorsed by EU member states.

This is a process that takes time and we certainly believe in the incremental phases of this process, which keeps the country on the radar screen and also helps it implement the necessary reforms that seek improvement in terms of democratic credentials and economic development.

Q: As a representative of a country that is looking to join the EU, are you worried about a contagion effect of the Brexit and does this debate have any bearing on Albania’s EU aspirations?

Q: Is there a danger that Brexit has started a debate that could lead to some countries falling back into Russia’s sphere of influence?

Bushati: Russia is quite present in our region if one looks at the trade figures, investments, and also historical and religious ties. I don’t necessarily see a clear linkage between a Brexit and Russia’s influence in the region.

On the contrary, if the EU will continue to engage with our region in strategic terms in energy-related projects, in projects which would bring the necessary economic development and bridge the gap between the EU and the Western Balkans, I think we would be less concerned about influences of the so-called third actors that are quite present in the region.

Q: What impact does the prevailing European security situation have on transatlantic relations and can this be an opportunity to strengthen partnerships?

Bushati: We need to reaffirm the transatlantic bonds. The decision of NATO to extend an invitation to Montenegro was a decision in the right direction. We need to engage with all countries in the region, no matter whether they would like to join NATO or not, in a structured partnership and dialogue in political and security terms, to reduce as much as possible influences of other actors, which do not necessarily share the same values, views, and objectives as that of our transatlantic family.

Q: The United States and Albania formalized a strategic partnership in 2015. What are the practical implications of this partnership?

Bushati: We are strategic partners and allies. We have been together in different international fronts—Iraq, Syria, Afghanistan, in humanitarian operations. The United States is a staunch supporter of Albania’s accession to the EU. We have been privileged to use US assistance in rule-of-law-related projects. We are now entering into new waters, discussing projects of mutual importance, projects related to energy security. We are appreciative of US support because we believe that if the Balkans is nowadays at peace, although we have to face many challenges, this is largely due to the success of US foreign policy in our region.