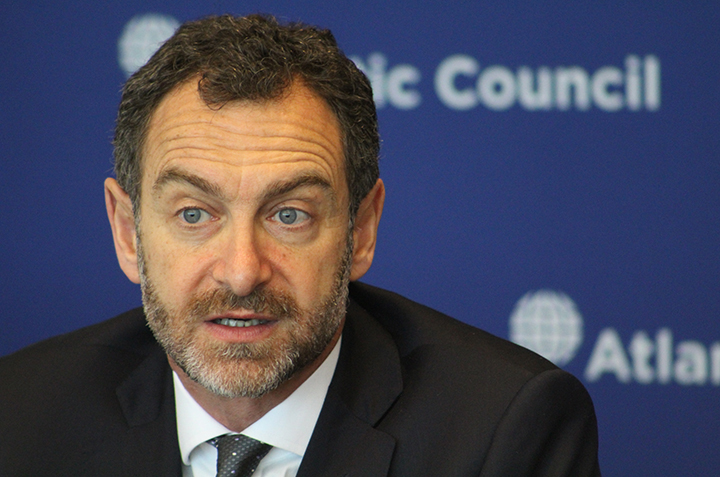 “We have millions of people on the brink in the northeast of Nigeria,” Toby Lanzer, the United Nations Assistant Secretary-General and Regional Humanitarian Coordinator for the Sahel, said at the Atlantic Council on April 15. “We don’t know how many millions. We will know in a few days’ time and we will make as much noise about this as we possibly can,” he added. (Atlantic Council/Julian Wyss)

Millions of people are starving in northeastern Nigeria and efforts to reach out to Boko Haram—the Islamist militant group directly responsible for their plight—to ensure a space to deliver humanitarian aid have been met by silence, a senior United Nations official said on April 15.

“It is very, very grim,” said Toby Lanzer, the United Nations Assistant Secretary-General and Regional Humanitarian Coordinator for the Sahel. “It is much worse than we thought…in terms of protection, in terms of food insecurity.”

“We have millions of people on the brink in the northeast of Nigeria. We don’t know how many millions. We will know in a few days’ time and we will make as much noise about this as we possibly can,” he added.

Lanzer last week traveled by road outside Maiduguri, the capital of Borno state in Nigeria’s northeast—the heart of the Boko Haram insurgency. He was the first independent observer from the aid community to visit the region in two and a half years.

“What we saw…was utter desolation and destruction,” Lanzer said in a meeting hosted by the Atlantic Council’s Africa Center.

Recalling his visit to the town of Bama, he said: “It was really quite troubling. We had heard of hunger, we had heard tales of starvation, and I think it is fair to say that we can now confirm that that is the case in northeast Nigeria.”

Early in 2015, in his final months in office, Nigerian President Goodluck Jonathan launched a massive military campaign to drive Boko Haram out of its strongholds in the northeast.  Jonathan’s successor, Muhammadu Buhari, who continued the military campaign, declared in December of 2015 that Nigeria had “technically” won the war against Boko Haram. Barely a month later, on January 30, Boko Haram killed more than eighty people in Dalori on the outskirts of Maiduguri.

Boko Haram’s shadow looms large in Nigeria. This week, Nigerians marked the second anniversary of the abduction by the militant group of nearly 300 schoolgirls from their dormitories in the northeastern town of Chibok. Nearly all of the girls are still missing.

The kidnappings brought the crisis in the lake Chad basin region to the world’s attention, said J. Peter Pham, the Director of the Atlantic Council’s Africa Center. “That attack was part of a larger challenge, not only security, but political, economic, and social, which affects the greater Sahel region as a whole and the Lake Chad area in particular,” Pham said.

Boko Haram, which last year allied with the Islamic State of Iraq and al-Sham (ISIS) and rebranded itself as the Islamic State West Africa Province (ISWAP), ranked as the world’s deadliest terrorist group in 2014. The United Nations estimates that more than 2.3 million people in the region have fled their homes since 2013 because of the violence.

In a candid admission, Lanzer said the international community, and the United Nations in particular, had not performed well in the Lake Chad basin area.

Toby Lanzer, the United Nations Assistant Secretary-General and Regional Humanitarian Coordinator for the Sahel, spoke at an event hosted by the Atlantic Council’s Africa Center, which is led by J. Peter Pham. (Atlantic Council/Julian Wyss)

Lanzer placed the blame for the situation in Nigeria, as well as its immediate neighborhood—Cameroon, Chad, and Niger—squarely on Boko Haram. He acknowledged that the Nigerian military, too, “has not been the most professional at all times. It has not been the best equipped or the best behaved at all times.”

However, Lanzer noted a new determination and an openness on the part of Nigeria’s new army chief, Lt. Gen. Tukur Buratai, who privately acknowledged that his military needs assistance.

As a result, a coalition that includes the United States, the United Kingdom, and parts of the United Nations are working with the Nigerian army to try to address shortcomings. “That is good and that needs to be recognized,” said Lanzer.

The Nigerian military offensive deprived Boko Haram of  much of the territory it had seized, but has turned the group into an insurgency that is capable of carrying out unconventional attacks and terrorizing populations.

“Last week we felt that Boko Haram had definitely been dislodged and they were on the back foot,” said Lanzer, “but that probably means that they are going to employ different tactics. Instead of taking something and holding it they will use terror to pursue their aims.” It is unclear, however, what Boko Haram has actually set out to achieve.

Meanwhile, the United Nations, via different channels, has attempted to signal to Boko Haram its intentions—“to keep people alive”—but those signals have been met with silence, said Lanzer. “I think we should be very realistic about our ability to ‘negotiate’ humanitarian space or have a conversation with an extremist group such as Boko Haram,” he added.

Why does it matter?

Lanzer said it was important to respond to the challenges in the Lake Chad area because the entire region is vulnerable to the forces of instability, particularly a mix of terrorist groups—ranging from Boko Haram to al-Shabaab—that are operating in the region. In Senegal, for example, in conversations about the region the conclusion is “it is less a question of if something were to happen, but when,” he said.

Some of the migrants who are fleeing to Europe today come from parts of Africa that are facing terrorism, food insecurity, and economic strife. Lanzer said European governments must support governments across the Sahel. “If we don’t support them in terms of stability, but also in terms of addressing the underlying issues, which gave rise to this situation…we will have a far bigger problem” with migrants from the region, he said.

In a sign of the growing attention to the Lake Chad region, Samantha Power, the US Ambassador to the United Nations, will visit Nigeria, Chad, and Cameroon next week.

“It is going to be challenging to work in this part of the world, but it is necessary,” said Lanzer.