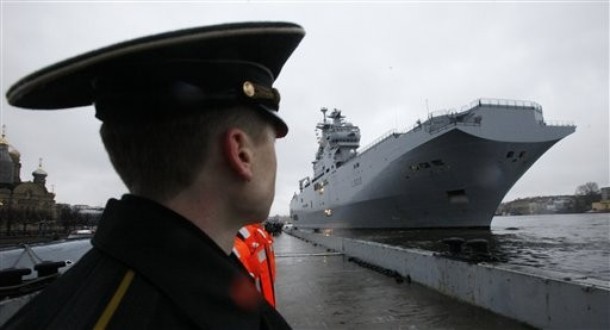 As French officials sat on the beaches of the Côte d’Azur last August, some no doubt thought that they were on a well-earned break from negotiations to sell Mistral amphibious assault ships to Russia.  Imagine their surprise when a northeast wind kicked up the seas, instantly transforming what they thought were nearly concluded exclusive negotiations into a full blown international contest.   Back in Paris by early September, their efforts to set the sale back on course range from comical to pitiful, but, nonetheless, dangerous.  Let us hope, to borrow the words of Homer, that the deep blue waves of Amphitrite drive the Mistral deal against the rocks that the gods call the Wanderers.

In the words of the French Navy’s website, Mistral and its sister ship Tonnerre, “flagships of the National Navy…significantly reinforce French and European power projection and strategic transportation capabilities…this involves the ability to project ground and air forces and to assure their sustainment and command and control.”

The Mistral class of ships is designed to attack the shore from the sea, an ideal weapon for Russia to intimidate its neighbors in the Black Sea, the Baltic and in the western Pacific.  Mistrals can carry up to 900 naval infantry soldiers; 16 to 35 helicopters, depending on the type; and a mix of military vehicles, including up to 40 tanks, again depending on the types.

Indeed, said Russian Navy Commander Admiral Vladimir Vysotskiy last autumn, “In the conflict [against Georgia] last year, a ship like that would have allowed the Black Sea Fleet to accomplish its mission in 40 minutes, not 26 hours, which is how long it took us.”

Although elements of the Russian military-industrial complex resisted, Moscow’s naval and political leaders pursued the Mistral purchase enthusiastically and skillfully.  “We plan to buy one Mistral class ship in France and, with technical support from the French, to build four helicopter carriers of this class under license,” Vice Admiral Oleg Burtsev, First Deputy Chief of the Russian Navy staff, told a November 2, 2009 press conference.

As negotiations unfolded, two issues emerged.  First, despite rhetoric about a strategic dialog with Russia, the real French motivation behind this scheme is to save ailing French shipyards with a multi-billion dollar contract.  Paris wants to build the ships in France and sell them to Russia.  Russia, of course, wants to buy an impressive military capability for its barnacle-ridden navy, but it is equally interested in buying both the military technology aboard the Mistral ships and the manufacturing technology to propel its own shipyards into the Twentieth Century.

Money is an easily divided value, so one can readily see a compromise at, say, two ships built in France and two under license in Russia.

But the second, tougher issue to emerge is technology transfer.  Indeed, Mistral’s formidable capabilities turned out to be a two-edged sword.  On one side, the French must tout Mistral’s virtues—otherwise, why would the Russians want to buy it?  During an October 1, 2009 visit to Moscow, French Foreign Minister Bernard Kouchner said that he looked forward to Russia having “this marvelous ship.”  On the other side, the idea of such capabilities in the hands of Russia alarmed its neighbors in the Black and Baltic Seas.

Protests from countries such as Georgia and NATO ally Estonia evoked some bizarre verbal gymnastics in Paris.  At one moment, French officials almost said that they would only sell Russia an empty hull.  Understandably, Moscow was not amused about the prospect of buying a spanking new ship fit only to be a floating gambling casino.

On the eve of his June visit to Paris, Russian Prime Minister Vladimir Putin fired a shot across the French bow.  “For us,” he told France-2 Television, “this deal is interesting only if it is accomplished with a parallel transfer of technology, so that our shipbuilders—both civilian and military—receive a new technological boost for development.”  Then, while French officials sipped light summer wines by the seaside, the Russian Defense Ministry announced an international tender for the prospective purchase of amphibious assault ships.  That opened the competition to a Russian shipyard but, more frightening to France, to shipbuilders in the Netherlands and Spain.

Paris panicked.  Chief of Staff General Benoit Puga was dispatched to Moscow to ask what had become of the exclusive negotiations in which Paris had thought it was engaged.  Then, French President Nicolas Sarkozy anxiously awaited a Russian delegation in Paris for the September 7 Franco-Russian Council for Security Cooperation.  Exclusive negotiations, Russian Foreign Minister Sergei Lavrov explained on that occasion, assume the transfer of high technology.

So the Mistral odyssey continues.

Still engaging in verbal gymnastics, French Defense Minister Herve Morin asked, “Can we consider for even a moment that the sale of a few vessels can significantly change the balance of power and the strategic situation between Georgia and Russia?”

That is the crucial question and, just now, Moscow appears to have maneuvered Paris into the straits between Scylla and Charybdis, from which, Homer tells us, no ship has got away.