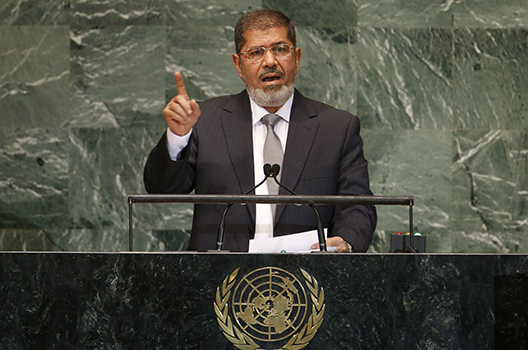 Morsi was in a hearing facing espionage charges, reportedly stemming from alleged contacts with the Palestinian militant group Hamas, when he collapsed and later died, according to a report on Egyptian state television.

“While Morsi’s death is a single event, its long-term ramifications will be numerous and far-reaching,” said Jasmine M. El-Gamal, a nonresident senior fellow with the Atlantic Council’s Scowcroft Center for Strategy and Security.

Morsi was elected president of Egypt in June 2012 after the country’s longtime ruler, Hosni Mubarak, was forced to resign following weeks of pro-democracy Arab Spring protests.

“Morsi’s election represented the first time Egyptians were able to freely and democratically elect their leader, a moment that many young Egyptians saw as progress toward transition away from the lifelong presidencies that preceded Morsi and continue to dominate much of the region,” said Tuqa Nusairat, deputy director of the Atlantic Council’s Middle East Programs.

A little over a year later, on July 3, 2013, the military, led Gen. Abdel Fattah el-Sisi, ousted Morsi following four days of protests during which millions of people demanded the Islamist president step down. The protesters accused Morsi of undermining democracy and wrecking the economy.

El-Sisi has served as president of Egypt since 2014 and recently forced through changes in the constitution that would allow him to remain in office until 2030.

Richard LeBaron, a nonresident senior fellow with the Atlantic Council and a former US ambassador to Kuwait and deputy chief of mission at the US Embassy in Israel, said: “It would be folly to draw many lessons from Morsi’s brief tenure in power.”

“While many Egyptians wanted democratic change, and still do, they also are accustomed to a stifling brand of political stability—Mubarak and Sisi. Morsi ran afoul of both the people’s need for stability and the Egyptian deep state’s desire for control,” he added.

Morsi had been detained by the Egyptian government since being forced out of power. He was sentenced to death in 2015 for his role in leading a prison break during the 2011 anti-Mubarak demonstrations. That sentence was overturned in 2016, but he remained in detention on charges related to the killing of protesters in December 2012 and alleged espionage on behalf of Hamas and Qatar.

Borzou Daragahi, a nonresident senior fellow in the Scowcroft Center for Strategy and Security’s Middle East Security Initiative, said that “while it’s hardly unusual for an Egyptian male to die of a heart attack at age sixty-seven, Morsi’s advocates abroad have been publicly warning of his dire health situation for nearly a year and a half, describing his care as inadequate and possibly tantamount to torture.”

In April 2018, three UK parliamentarians argued that Morsi’s treatment in prison was so harsh that “he could face a premature death.” Members of the House of Commons, Crispin Blunt and Paul Williams, along with Lord Edward Faulks specifically highlighted lack of treatment for Morsi’s diabetes and alleged commitment to solitary confinement for twenty-three hours a day.

“As one of nearly 60,000 political prisoners in Egypt, former president Morsi was being held in difficult conditions, denied proper medical care, and by most accounts, denied a fair trial,” said Nusairat, adding that “torture and deliberate negligence of political prisoners in Egypt since President Sisi forcefully came to power six years ago have been well documented by international human rights organizations.”

Nusairat said Morsi’s death “will rile up his supporters, many of whom are now exiled outside of Egypt, but under Sisi’s tight grip, there is little room for expressing dissent.”

H.A. Hellyer, a nonresident senior fellow in the Atlantic Council’s Rafik Hariri Center for the Middle East explained that “for his supporters, Morsi will remain a symbol of defiance and over time, I think, will be appropriated in all sorts of ways – perhaps like Sayyid Qutb, who was another Muslim Brotherhood leader who died while in the custody of the Egyptian state.”

El-Gamal said: “The eventual abuse of Mohamed Morsi in life and his humiliation in death will achieve none of what was intended by his jailers.”

“Instead,” she said, “the Muslim Brotherhood as an organization will likely further radicalize. Egyptians will become further divided and therefore harder to govern without some form of large-scale repression of one side. The Brotherhood’s political backers will see this as an opportunity to stoke simmering grievances across the region.”

For Morsi’s opponents, Hellyer added “the narrative is going to be focused on erasure – the rarity of even describing Morsi in connection to his previously held position as the elected, even if then removed, president of Egypt, within the Egyptian press, shows that.”

“Like much else in Egypt in relation to the revolutionary period, the discussion around Morsi’s death is going to be deeply politicized and be thrown into a battle over the truth,” he added. “Sometime in the future, nevertheless, Egyptians are going to have to come to terms with the entirety of the revolutionary period of 2011-2013, and the counter-revolutionary wave thereafter, with all the problems arising thereto. The reactions to Morsi’s death are yet more evidence that such an exercise is significantly needed, and at the same time, not likely anytime soon.”

“Morsi’s end becomes sadly emblematic of the fate of Egyptian democracy following the crushing of the 2011 uprising as well as the hellish state of Egypt’s prisons, which continue to be incubators of misery and anger,” Daragahi argued.

Noting that in his White House meeting with el-Sisi in April, Trump had declared the US-Egyptian relationship had never been stronger, Nusairat said: “As with several other autocratic leaders, Trump has ignored calls (including those by several US senators) to use economic and military aid as leverage in discussions on human rights violations (Egypt is the second-largest recipient of US aid).”

“That position is not expected to change with Morsi’s death, nor will much change on the ground in Egypt (besides using Morsi’s death as an opportunity to crackdown on any expressions of support for the late president),” she added.