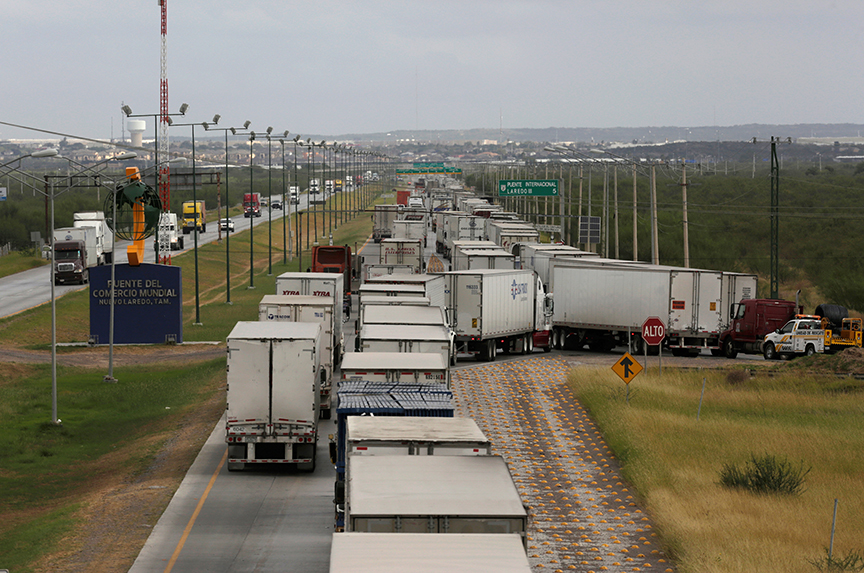 Trucks waited to cross into the United States at the World Trade Bridge in Nuevo Laredo, Mexico, on November 2, 2016. (Reuters/Daniel Becerril)

The day after US President Donald J. Trump’s swearing in, it was posted on the White House website that “the President is committed to renegotiating NAFTA [to give] American workers a fair deal.”

Before moving forward to “renegotiate,” it is essential that the administration appreciate what NAFTA has accomplished.  Joining the economies of Canada, Mexico, and the United States created a $19 trillion market with 490 million consumers. In the twenty-three years since NAFTA took effect, vibrant integrated supply chains have developed linking the three economies in ways that have been enormously beneficial to the United States.

Most of the complaints about NAFTA have been directed at Mexico. Since one of the president’s top goals is to create jobs, it is important to point out that in 1993, the year before NAFTA took effect, the number of US jobs linked to our trade with Mexico totaled 700,000; today roughly five million US jobs depend on our expanded trade with Mexico.

The president also made clear during the campaign that he wanted to increase exports and decrease imports.

Mexico’s exports also on average have high US content. Since Mexico has twice as many free-trade agreements as we have, when it exports outside of North America obtaining preferential entry that we do not enjoy, it serves as a very effective export agent for our goods.

We should not lose sight of the fact that roughly 60 percent of what the United States imports are intermediate goods that make our exports more competitive.

Certainly, NAFTA could be “updated.” As it was negotiated twenty-five years ago, issues involving the digital economy and e-commerce did not exist; there was no need to protect data flows or prohibit data localization.

Labor and environment originally covered by “side agreements” could be strengthened and brought into NAFTA for today there is heighted awareness of their importance.

When we negotiated NAFTA, Mexico had a constitutional restriction on opening its energy sector. This has since been removed.  We can now address energy issues.

One element of NAFTA that has been mentioned by the Trump administration as a “must” in a “renegotiation” is NAFTA’s dispute settlement mechanism. It is important to recognize that NAFTA has several dispute settlement provisions.

One deals with the agreement overall.  An element that has caused contention that could be removed is the ability of a government to slow down dispute resolution by delaying the appointment of a panelist. It is unclear whether the Trump administration would want its options so limited.

A second is the investor-state dispute settlement, which is little understood in the United States.  As of 2016, the United States had not lost a case.  As a lawyer, I would argue that arbitration is faster and cheaper than judicial resolution, but the administration may prefer the courts.  It is unclear whether it would want to focus on this issue when we have enjoyed such a good winning record.

A third is our mechanism for resolving anti-dumping and countervailing duty disputes. Again, it is unclear whether the administration would want to change this when so much political focus has been put on “enforcement.”

In their effort to update NAFTA our negotiators would benefit from reviewing all the new areas that were negotiated in the Trans-Pacific Partnership, including rules governing digital economy and e-commerce, protecting digital flows and prohibiting data localization, strengthening rules governing labor and the environment, and ensuring that state-owned enterprises compete on a commercial basis.

But the administration’s critical first step should be to focus on why NAFTA is important. That will enable it to update the agreement wisely without destroying the invaluable economic and strategic relationships that we have created with our northern and southern neighbors.

Carla A. Hills is chair and chief executive officer of Hills & Company.  She served as US Trade Representative from 1989-93.