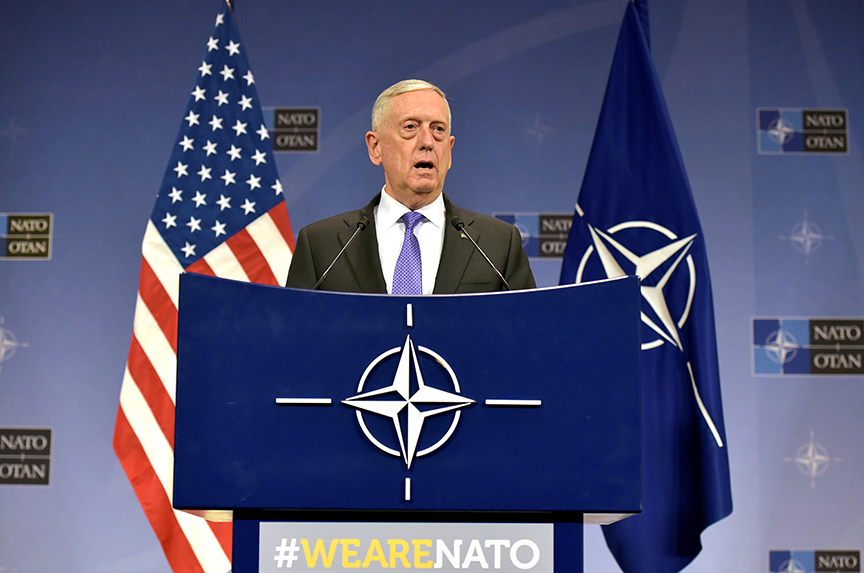 Back in the spring of 2008, I was enjoying a quiet moment in my office at NATO headquarters when the phone rang. My assistant told me that the new Supreme Allied Commander Transformation (SACT), Gen. James Mattis, was making his courtesy calls to NATO in Brussels and would drop by in ten minutes to talk to me.

Frankly I was mystified.  NATO has two supreme commanders, SACEUR (Supreme Allied Commander Europe) and SACT, and in all my thirty-eight years on the NATO international staff I have never known either of these individuals to call on an official below the rank of secretary general, the chairman of the Military Committee or the NATO ambassadors on the North Atlantic Council. At that time I was the director of the Policy Planning Unit. If he had an issue at my level, Mattis would normally dispatch an aide or one of his section chiefs. What could I contribute that would make our new SACT wish to come to see me in person?

Before I had time to think of a reason, in swept the general in his immaculate Marines uniform and sat down at his insistence not on one of my painfully acquired NATO issue sofas but on my desk chair next to the door. He politely but firmly ordered all of his vast entourage to step outside and come back in an hour.  Why had Mattis taken the time and trouble to immediately master the Who’s Who at NATO and to seek me out in particular?

Essentially it was all about how he could connect his new command, ACT, better to the everyday work and priorities of NATO Brussels.  With his sharp political brain, Mattis had picked up quickly on the gap between Norfolk, Virginia, and the daily grind of the bureaucracy in Brussels. When ACT had been first established to succeed the Cold War Atlantic command, SACLANT, in the early 2000s, its focus on futuristic and conceptual work had made it remote and little understood, even a wasted asset at a time when the Alliance was engrossed in the daily issues of Afghanistan, the Balkans, and enlargement policy. So Mattis was in urgent need of ideas as to how he could build a more convincing narrative about transformation and its usefulness to the NATO political leadership as well as have his new headquarters more closely involved in NATO’s defense planning, capability development and exercises, education, and training for the upcoming security challenges. That is why he bothered to seek out an old timer who could give him a broad perspective on how the NATO machinery operates.

That particular day, Mattis listened to me, took notes and asked plenty of questions. After an hour he got up, convinced my long-suffering assistant not to give up on me too soon and departed on his way. Over the next few months we worked together on lots of projects to reinforce the ACT liaison staff at NATO, organize ACT seminars for the ambassadors on every topic from cyberspace to  working with  NGOs in peacebuilding operations. ACT was brought in from the cold. Mattis transformed transformation so that the ambassadors understood why and how it mattered, and could act on it.

So working with Mattis is inspiring and fun. When he left NATO in 2010 to take over the US Central Command, it was to hand over ACT to our first French Supreme Allied Commander, Gen. Stéphane Abrial. It was typical of Mattis to make way gracefully to secure the larger goal of France’s return after a thirty-two-year absence to NATO’s integrated military structure at the Strasbourg-Kehl Summit in 2009. Alliance cohesion and keeping the Allies actively engaged in NATO’s tasks and missions always came first for him.

In 2016, the US presidential elections saw Donald J. Trump arrive at the  White House.  The  US NATO ambassador at the time, Doug Lute, immediately rushed off to Washington to take soundings. He came back a few days later and briefed the NAC with impressive prescience on what a Trump presidency would mean for NATO and transatlantic security relations more generally. He well predicted on that day the upcoming discussions on defense spending and burden sharing, the doubts that Trump would have regarding the utility of the US/NATO missions in Afghanistan, the pressures on NATO to do more in the fight against terrorism, to name but a few of the many new questions Trump would soon put to NATO given his more transactional view of international engagements. But the one piece of good news that Lute  brought back with him was that Mattis would be the new defense secretary. The sense of relief around the table that day was palpable. No other leader in Washington could combine the civilian and military perspectives, listen to the Allies yet speak truth to power on both sides of the Atlantic without at any time raising doubts as to his fundamental commitment to the Atlantic project as an irreversible gain from history.  With Mattis at the helm in the Pentagon, we might be in for a rough ride but what could possibly go wrong?

The last two years have underscored the enormous debt that NATO owes to Jim Mattis.  He has reassured Allies at a time of uncertainty even anxiety in the transatlantic relationship. He has supported a major recommitment of US forces to Europe as part of the US-European Deterrence  Initiative. He has encouraged the European Union members to cooperate more closely on their defense programs as long as these efforts strengthen and do not undermine NATO. He has pushed for the United States and NATO to maintain their commitment to Afghanistan and to step up training efforts in Iraq and the broader Middle East. And he even took the trouble to travel to the former Yugoslav Republic of Macedonia to support the government against a flood of Russian propaganda during its recent referendum campaign on the country’s name change. Just as he took the time and trouble to come and see me on that spring day in 2008.  Because he is focused on results, getting all his facts right and getting the job done rather than on his own role and profile in the process.

Gen. Charles de Gaulle famously remarked that the cemeteries are full of people who believed that they were indispensable. That remark would never have been said of Jim Mattis. But his departure from the Pentagon after just two years, notwithstanding the enormous pressures of the secretary of defense job, leaves a massive gap at the heart of US and Alliance security policy. It is difficult to see who could fill that gap. Who, for instance, will speak up so honestly for the centrality of NATO to US security interests beyond the frustrations of burden sharing in the short term?  Who will ensure that the US military presence and reinforcements in Europe are strong enough to deter all forms of aggression?  Who will stand up for a continuing US and NATO commitment to Afghanistan and the Middle East to prevent a resurgence  of ISIS and al Qaeda and generations of future jihadis?  And who will take forward the necessary transformation and restructuring of the US armed forces to successfully confront peer level and high tech competitors as outlined on the many US national security and defense strategy papers that Mattis has bequeathed to us?

All of these challenges would have required Mattis to be at the head of the Pentagon for two presidential terms rather than only half of the first. If De Gaulle is to be believed, there must be at least a few alternative Jim Mattises hanging around Washington and waiting for the call to serve. Hopefully the opportunity that Mattis represented will not be lost. He was rare in his capacity to carefully listen to others. Maybe it is time that we carefully  listen to him.

Jamie Shea is professor of strategy and security at the University of Exeter and senior fellow at Friends of Europe. He is a former deputy assistant secretary general for emerging security challenges at NATO. He retired in September after thirty-eight years at NATO.

Image: US Secretary of Defense James Mattis gives a news conference after a NATO defense ministers meeting at the Alliance headquarters in Brussels, Belgium, on June 29, 2017. (Reuters/Eric Vidal)