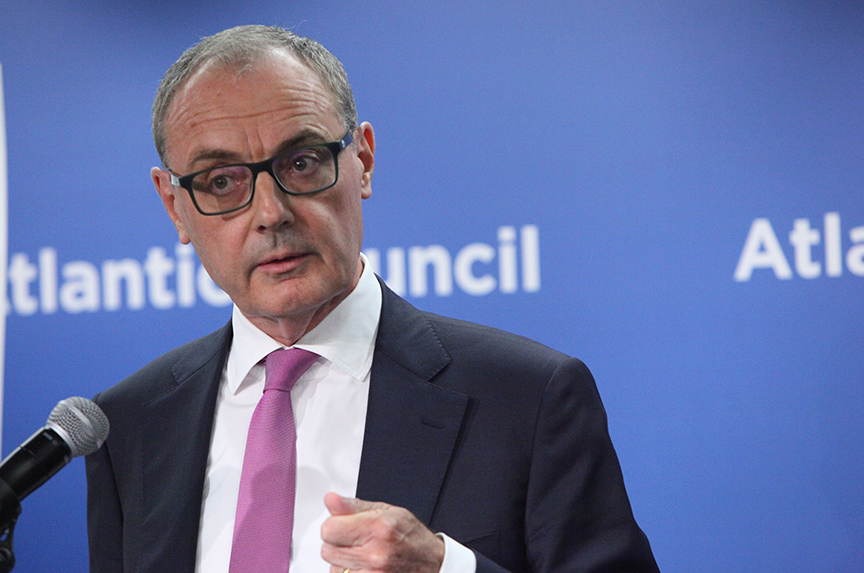 “Nothing changes until there is an agreement on the UK leaving the European Union,” David O’Sullivan, the EU’s ambassador to the United States, said referring to the period between when Brexit negotiations commence and the United Kingdom formally exits the bloc. (Atlantic Council/Victoria Langton)

The European Union wishes to negotiate the “best exit possible” for the United Kingdom from the bloc, said David O’Sullivan, the EU’s ambassador to the United States.

“I don’t think it is a question of saying that this or that issue is a red line,” O’Sullivan said in an interview at the Atlantic Council on October 6.

On June 23, Britons voted in a referendum for the United Kingdom to exit the European Union—an act that has come to be better known as Brexit. However, the Brexit ball cannot get rolling until the British prime minister invokes Article 50 of the Lisbon Treaty, which governs such exits.

Earlier in October, British Prime Minister Theresa May said she will begin the formal process of the United Kingdom leaving the EU by the end of March 2017. Article 50 has never before been invoked.

In an early indicator that the Brexit negotiations will be far from pain-free, Slovak Prime Minister Robert Fico said in September that the Visegrad group of Central European countries— Hungary, Poland, the Czech Republic and Slovakia—would veto any deal that limits their citizens’ rights to work in the United Kingdom.

British officials have said that their priority is to control European immigration while maintaining access to the common market. EU officials, on the other hand, have made common market access contingent on the UK allowing free movement.

In an interview with the New Atlanticist’s Ashish Kumar Sen, David O’Sullivan discussed Brexit, the migrant crisis roiling Europe, and the future of the Transatlantic Trade and Investment Partnership (TTIP) treaty. Here are excerpts from our interview.

Q: British Prime Minister Theresa May has said her government will trigger Article 50 by the end of March 2017. Once Article 50 is invoked, what is the status of the UK within the EU and of its obligations under agreements made and entered into as an EU member state?

O’Sullivan: There was general welcome to the clarity about the timeframe in which all of this is going to go forward, which is something that the European institutions and the twenty-seven member states have been asking for.

The formal answer to your question is that nothing changes until there is an agreement on the UK leaving the European Union. Until that time, the UK remains a full member of the European Union with all the rights and responsibilities which that implies.

Of course, the probability of leaving does change a little bit the context, but the formal answer is that the UK remains a full member of the EU. I think this is something that we have to emphasize. We are still twenty-eight and we are twenty-eight until such time as the final decision is taken for the British departure.

O’Sullivan: There is general agreement among the twenty-seven reflected in what has been said by [European Commission] President [Jean-Claude] Juncker and by [European Council] President [Donald] Tusk that the negotiations on the departure of the United Kingdom can only begin once there has been formal notification of Article 50, because it is only at that moment that the procedural context is clear and that will enable us to have a meaningful discussion.

I don’t think there is any disagreement between the twenty-seven or the European institutions on this issue. There will be no negotiations on this issue until such time as Article 50 has been triggered and hopefully in the timeframe which Prime Minister May has indicated at the Conservative Party conference.

Q: What are the EU’s red lines in the Brexit negotiations?

So I don’t think it is a question of saying that this or that issue is a red line. The UK is already a member of the European Union, it understands the functioning of the European Union, the interconnectedness of the different elements of the package which comes with being a member of the European Union. This is the position that I imagine the twenty-seven will wish the commission negotiating on their behalf to defend. We wait to see respectfully what the UK is going to suggest and propose. We still don’t have full clarity as to the kind of arrangements which the British government is going to propose for itself.

Q: What steps, if any, is the EU considering to address the dissatisfaction with Brussels that contributed to the vote for Brexit?

Sometimes it is a bit unfair, to be honest, because what happens in Brussels is a reflection of what our member states want, whether this is the member states represented by democratically elected governments in the Council or directly elected members of the European Parliament. Ultimately, those are the people who make the decisions. The institutions play a very important role in trying to shape and help those decisions, but at the end of the day, the political responsibility lies with our member states and with the directly elected members of the European Parliament.

Now, having said that, I don’t think that we can run away from the fact that there is a disconnect between what often happens in Brussels and how this is perceived and lived by our citizens around Europe. We definitely need to continue to address that. One of the ways is perhaps better to explain what is happening and also, frankly, we need to avoid the temptation simply to blame Brussels for decisions where people had a role. Everyone needs to take their responsibility in the system–whether that is national governments, national parliaments, the members of the European Parliament, or the European institutions. We owe it to our citizens to explain clearly how proposals get made, how decisions get taken, so that they can better understand how this process works and that in the end everyone thinks that they are trying to work in the best interests of our citizens. Is that always the way it is perceived? Is that always the way it is felt and lived? This is a real challenge and we are going to have to address this in the coming years.

The Bratislava summit made a certain start in that regard with the agenda which has been set out leading to another summit in Valletta in Malta, and to a summit in Rome in March next year on the sixtieth anniversary of the signing of the Treaty of Rome. All our politicians, whether in the institutions, or the member states, or in the European Parliament, are very conscious that at the end of the day the credibility of this whole exercise lies in popular support and democratic legitimacy. That is something which has to be clearly sought.

Q: What does Hungary’s anti-migrant quota referendum mean for the EU quotas? Slovak Prime Minister, Robert Fico, has said quotas are now “politically finished.” What is your assessment of the future of these quotas?

O’Sullivan: It is very important to be clear in our words here because migration and immigration is quite separate from the issue of refugees and asylum seekers. The fact is that a number of our member states, particularly Italy and Greece, have been in the front line of receiving large numbers of asylum seekers because of their geography. There is a strong feeling that we need European solidarity to help these states cope.

We have just agreed on the Border and Coast Guard Service [on October 5], which is a first step to help these countries better protect the frontiers of the European Union, which they do on behalf of us all not just on their own behalf. And we have seen other measures taken to provide humanitarian assistance within Europe, which is the first [time] we have ever done it, particularly in Greece, which is facing a particular challenge of a number of refugees and asylum seekers on their territory.

We have seen the beginnings of relocation. The numbers are not huge…5,000 to 6,000 are the numbers I have seen. The process is starting of taking a more continent-wide approach to this problem. Let’s be honest, if we took a continent-wide approach the numbers are much less daunting than they are if we ask individual countries, particularly those in the immediate front line, to bear the brunt.

We understand that some member states are not completely comfortable with this. The commission has recently made proposals that as an alternative to receiving refugees people could also make a financial contribution or contribute in other ways to resolving the issue. This dialogue is ongoing, but I think the important thing is that this is a European problem, which we have to face as the European Union and show solidarity between us all because while this may not be my problem today, it could be my problem tomorrow, or I will have a different problem tomorrow which I would like help with. That’s the way the European Union works. That’s the key message which the institutions have been trying to promote.

O’Sullivan: I think it is working. It has reduced considerably the outflow. There have been some returns of people finding their way illegally into Greece, and there have been refugees transferred from Turkey to member states of the European Union as part of the arrangement.

Turkey has been in the front line here with nearly three million refugees on Turkish territory. We understand this puts a huge burden on Turkey and we are more than willing to contribute to alleviating some of that pressure through our financial contributions.

Q: What does Brexit mean for TTIP?

O’Sullivan: Brexit is going to take a certain amount of time. In the meantime, the UK remains a full participant in the European Union. If we conclude TTIP any time in the next couple of years, before Brexit has happened, it will be concluded also on behalf of the United Kingdom. Then we will have to see what consequences [there will be].

At this point, we have to use the motto “let’s cross that bridge when we come to it.” Firstly, let’s have TTIP and then let’s see what might be the consequences of a future Brexit on that agreement. We are concluding, as we speak, this month I hope, a very ambitious [free trade] agreement with Canada. This will be concluded in the name of the twenty-eight member states of the European Union, including the United Kingdom.

On TTIP, we realize now that it will probably be difficult to finish it this year even though we had hoped that, having given up all hope, it still might be possible, but it does look difficult. It will clearly be for the next [US] administration and then we will have to see which administration, what their trade policy is, and can we conclude it next year or in 2018, which would perfectly be feasible if there was political will on both sides. Then we will see where we are with Brexit and what is the relationship of the UK in some future configuration outside of the European Union.