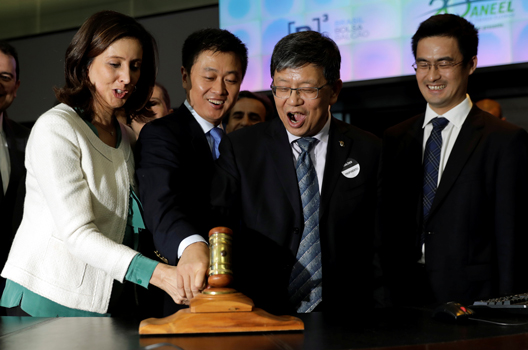 As Latin America embarks on the path to economic recovery, the region is in dire need of job creation sources, which, given dwindling US engagement with its southern neighbors, might be increasingly reliant on China.

Beijing has rapidly increased its investments in the region, with over $10 billion invested per year since 2012. If current trends continue, the incipient China-Latin America partnership could become an engine for employment growth and broader economic development.

Latin America’s low foreign investment restrictiveness, its abundant natural resources, and growing diplomatic ties with Beijing have prompted Chinese firms looking to expand market access and bypass trade protections to pour capital into the region. A recent report written by the Atlantic Council and the Organization for Economic Cooperation and Development (OECD), Chinese FDI in Latin America: New Trends with Global Implications, found Chinese companies have invested more than $110 billion in Latin America, and that since 2012, a large proportion of record Chinese foreign direct investments (FDI) go to the service sector.  This is a shift from past trends when the majority of Chinese FDI went to the extractive sector, mainly oil and mining, and it mirrors the growing role of services in China’s domestic economy..

Heightened relations with China have not come without concerns for Latin America. In particular, a reigning apprehension for Latin American businesses is that Chinese trade and finance harm employment. Since the turn of the Century, increased imports from China have hindered domestic industry and therefore manufacturing jobs. Also, in the past decade, as China’s policy banks doled out more than $140 billion in loans to Latin America—often contingent on using Chinese firms and equipment for the construction of infrastructure— Chinese workers were brought in temporarily to work on projects that would facilitate surging commodity exports to China.

A closer look at direct investments, though, shines a light on the long-lasting positive impacts China can bring to Latin American labor.  Data from the report on Chinese FDI in Latin America reveals that since 2003, Chinese firms invested in over three hundred greenfield deals—where operations are built from the ground up— worth $46 billion. These investments in new companies and factories created an estimated 111,000 jobs in Latin America, benefiting not only those occupying the new jobs, but also the overall economic conditions in a number of countries across the region.

As the region’s largest economy, Brazil has received the bulk of Chinese FDI and resulting employment benefits in Latin America. Since 2003, over $18 billion were greenfield investments estimated to have created 38,200 local jobs. More than two thirds of these positions were generated in the manufacturing sector, partly due to the country´s high local content requirements and a historically strong industrial sector.

Mexico, with over $5 billion in greenfield investments by Chinese firms, saw over 20,000 jobs created, mostly in manufacturing and services. Argentina, Venezuela, and Peru also experienced employment benefits, but to a lesser extent and more focused on agriculture, oil and gas, and mining, respectively.

The impacts of FDI on job creation vary widely depending on the destination sector. According to the report, the extractive sector received the largest value share of FDI when mergers and acquisitions are included. More labor-intensive activities in the manufacturing sector received less investment flows than extractives but created more jobs. On average, $1 million invested by China in Latin America’s mining resulted in the creation of three jobs, compared with nine jobs in the automotive industry and an impressive eleven jobs in consumer electronics.

Growing manufacturing investments in Latin America highlights Beijing’s strategy of exporting some of its production. This can be attributed to the “going out” policy—an attempt to propel Chinese companies to the global arena—and ongoing domestic transition to a services and consumption-oriented economy. As wages rise in China, Latin America provides an opportunity for Chinese businesses to increase productivity through arbitrage—taking advantage of lower labor costs— while gaining access to foreign markets. According to Euromonitor, wages in China’s manufacturing sector have grown threefold since 2005 to $3.60 in 2016, while manufacturing wages decreased from $2.90 an hour to $2.70 in Brazil, and from $2.20 to $2.10 in Mexico for the same period.

Detailed in the report, an example of China’s production going global can be found in Latin America’s automotive industry, which generated nearly 40,000 jobs as a result of Chinese investments. This represents over 70 percent of jobs created by China’s manufacturing ventures in the region.

In the past decade, Chinese automakers invested substantially in Brazil to gain access to its sizable consumer market, while looking to dodge the Brazilian government’s import tariffs on foreign-produced vehicles. If produced in China, cars exported to Brazil would be subject to such a tariff. Investing in Latin America allows firms to relocate, creating jobs and cutting costs. Chery Automobile, a leading Chinese employer in Latin America with around 7,000 positions created, invested $700 million in a production plant in Jacareí, near the city of Sao Paulo. The facility began production in 2013, and has an annual capacity of 170,000 vehicles.

Brazil’s import restrictions on cars exclude Mercosur countries (Argentina, Uruguay, and Paraguay), making them attractive partners and locations for China’s automakers and production plants as well. In 2009, Chery’s own Chery Socma—a tripartite joint venture with Argentinian and Uruguayan firms— committed up to $500 million to build a car assembly plant in the rural province of Chaco, employing 2,000 workers.

Beyond manufacturing, China’s business incursions into Latin America’s services sector brought an estimated 22,500 jobs from $11 billion in capital. This figure is especially encouraging given the recent diversification of Chinese FDI in Latin America towards services, which accounted for 21 percent of investment flows from 2003 to 2012 and for over 50 percent between 2012 and 2016.

Within services, Beijing’s investments in the information and communication technology industry have been a major source of high-quality jobs in Latin America. Throughout the region, technology giants Huawei and ZTE have opened research and development facilities, technical training centers, and stores. Their combined greenfield investments amount to a total of $3 billion and 8,000 jobs created. As China’s tech firms gain ground in the global arena, technology transfer from FDI could be extremely beneficial for Latin America’s development and innovation.

Manufacturing and services investments have the positive spillover effects of putting upward pressure on wages and increasing high-skilled jobs.  In order to get the most out of Chinese FDI, Latin America should guide investors further into value-added manufacturing and the tertiary sector. Chinese companies, for their part, should continue to build trust with local governments and communities by increasing transparency in deals, highlighting the employment benefits of their investments, and ensuring their activities contribute to the vitality and know-how of the economies they affect.

China and Latin America will consolidate a “win-win” partnership if Chinese investment continues to create new jobs to fuel Latin America’s recovery, and enhances productivity to unleash the region’s potential.

Sebastian Maag is a BA candidate in international affairs and economics at the George Washington University. You can follow him on Twitter @maag_smaag.