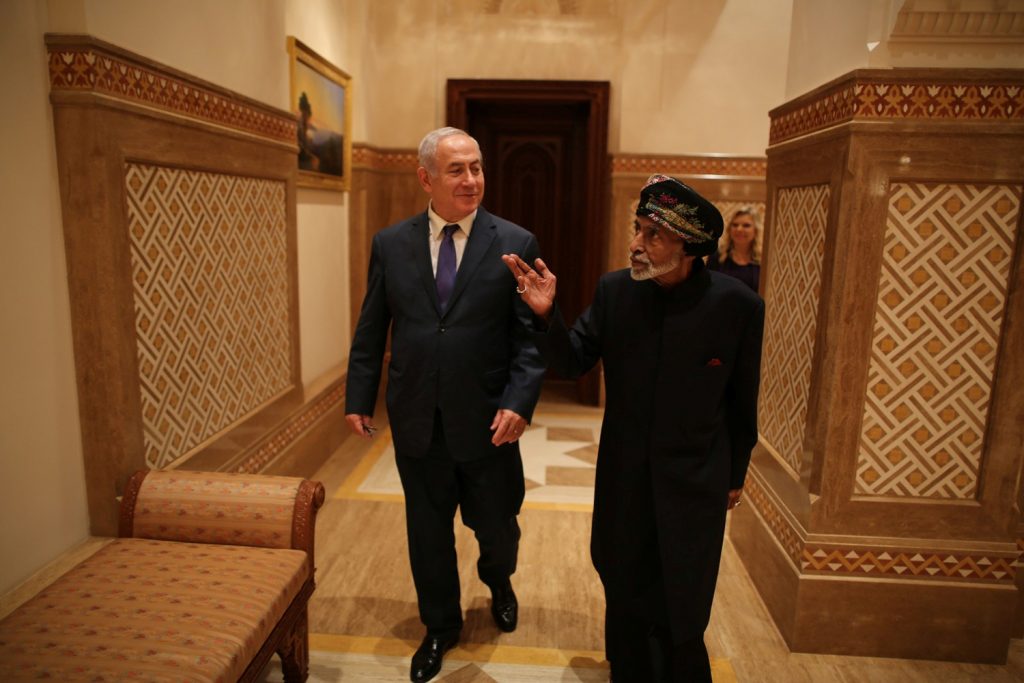 Barely a decade ago, any public praise of Israel—no matter how mild—was considered heresy throughout the Arabian Peninsula. But these days, a kosher caterer dishes out matzo ball soup and brisket in the shadow of Dubai’s 162-story Burj Khalifa skyscraper, and Jews openly gather every Friday night for Shabbat services at a nearby synagogue.

These include common fear of Iran’s nuclear ambitions, growing uncertainty about the US commitment to the Gulf region, a desire by oil-rich Arab nations to access Israeli know-how and more recently, the worsening COVID-19 pandemic. All have given momentum to a rapprochement between the Jewish state and the six nations of the Gulf Cooperation Council (GCC): Bahrain, Kuwait, Oman, Qatar, Saudi Arabia, and the United Arab Emirates (UAE).

Joining them on the panel were Ambassador Anne W. Patterson, former US assistant secretary of state for Near Eastern affairs, and Ambassador Marc J. Sievers, a nonresident senior fellow of Middle East programs at the Atlantic Council.

“Israel has always wanted good relations with all Arab countries, including the GCC,” Bahgat said, adding that now, the GCC has plenty of reasons to view Israel as friend rather than foe.

“Traditionally, Egypt, Iraq, and Syria were the three pillars of the Arab world. For different reasons, this is not the case anymore,” he explained. “Egypt, with more than 100 million people, has very significant economic challenges, and Iraq and Syria have been in wars—Iraq since 1980, and Syria since 2011. So those three pillars are much weaker than they used to be, leaving the three non-Arab countries in the region—Iran, Turkey, and Israel—as the main players.”

Because of its sheer size and ancient civilization, said Bahgat, the Gulf states—especially Saudi Arabia and the UAE—have never trusted Iran, even when the Shah was in power. Nor do they trust Turkey under President Recep Tayyip Erdoğan, despite his attempts to be portrayed as leader of the Islamic world.

At the same time, Bahgat said, “there’s growing doubt about US intentions and credibility”— especially after the overthrow of Egyptian President Hosni Mubarak in 2011.

“This leaves Israel as a potential ally,” said Bahgat, citing two reasons why Israel looks so attractive from the GCC’s perspective. “One is the notion that the way to Washington is through Jerusalem. I believe there is some truth to this. The other is that Israel is a strong country. Its economy is one of the strongest in the world, and it has a higher standard of living than many European countries. It’s a leader in civilian and military technology—in cyber, missiles, and drones—as well as irrigation and water management.”

Yet hanging over this budding romance is the enduring Israeli-Palestinian conflict, and Netanyahu’s widely publicized intentions to annex up to 30 percent of the West Bank.

“The challenge for Gulf leaders is how to engage with Israel without being seen as throwing the Palestinians under the bus,” according to the report, adding that Iran and conservative religious elements throughout the Gulf—which hate both Israel and the royal families of Saudi Arabia, Bahrain, and the UAE—will use any rapprochement with Israel as a pretext to foment unrest.

Even so, Ferziger said from his Jerusalem office, “with all the rhetorical sound and fury that’s been triggered by talk of annexation, on the ground it’s been very subdued. The whole notion of annexation itself is very much window-dressing. There are 132 legal settlements and another 100 outposts—and they look very much like Israeli suburbs, with shopping malls and country clubs. So when you say that Ma’ale Adumim or Ariel is going to be annexed, it’s not much more than switching signs.”

For many years, Ferziger noted, Israeli hospitals have secretly treated wealthy Gulf Arabs who sought quality healthcare without having to travel to Europe or the United States. In June 2019, Dr. Yitzhak Kreiss, the director of Sheba Medical Center just outside Tel Aviv, was invited to Bahrain to attend the Trump administration’s “Peace to Prosperity” workshop.

But COVID-19—which has hit the Middle East particularly hard—is accelerating this trend.

“As awful as this coronavirus has been for the entire world, it does seem to have provided a platform for opening commercial relations between Israel and the Gulf,” said Ferziger, noting the July 2 signing of an agreement between Abu Dhabi-based Group 42 and Israel’s Rafael Advanced Defense Systems as well as Israel Aerospace Industries to combat the pandemic.

“While there’s a whole ecosystem of quiet Gulf investment in Israeli startups, it took the COVID-19 disaster to make this kosher—or halal—in the Arab world,” he said. Neither the Israeli partners nor Group 42, which specializes in artificial intelligence and cloud computing, gave any details about the venture.

Meanwhile, other deals are proliferating between Israel and its Gulf business partners.

“When you’re looking for big money, you look to sovereign wealth funds, and the sovereign wealth fund of Saudi Arabia was more than willing to put $4.4 billion into a startup founded by an Israeli, WeWork,” he said, referring to Tel Aviv-born entrepreneur Adam Neumann, who was ousted as CEO in 2019.

A more long-lasting relationship, he said, has been the profitable cooperation between Dubai’s DP World and Haifa-based Zim Integrated Shipping Services, which has made joint investments throughout Asia, Africa and Latin America. The report compiled by Ferziger and Bahgat also mentions the possibility of Saudi Arabia investing in Israel’s state-owned Eilat-Ashkelon Pipeline Co., which operates a 160-mile pipeline from the Red Sea to the Mediterranean, bypassing the Suez Canal.

Those business ties have come a long way since 1951, when the Arab League initiated a boycott against Israel—at one point blacklisting more than 8,500 companies that did business with the Jewish state. Even today, Israel’s official presence in the Gulf is limited to the Middle East Desalination Research Center in Oman (since 1996) and the International Renewable Energy Association in Abu Dhabi (since 2015).

But that’s already changing with the construction of the Israeli pavilion at the Dubai World Expo 2020, which has been postponed to October 2021 due to the COVID-19 pandemic. At the same time, the massive Abrahamic Family House—a sprawling interfaith complex containing Muslim, Christian, and Jewish houses of worship—is now under construction on Saadiyat Island, the cultural hotspot of Abu Dhabi.

While its cost hasn’t been announced, Ferziger said “it’ll be the most expensive synagogue built since the ancient Temple of Solomon, because that’s how they roll in the Gulf.”

“Tourism is going bonkers in Israel now. Hebrew websites are showing the Burj Khalif and the Palm Islands. There’s a real appetite. The Trump vision outlines an area here in East Jerusalem that will be built up to accommodate Muslim tourists to the Al Aqsa Mosque,” said Ferziger—assuming “the relationship continues to develop and doesn’t get cut down by the old dynamics of the Arab-Israeli conflict.”

To build on that relationship, Ferziger and Bahgat recommend the following steps be taken: