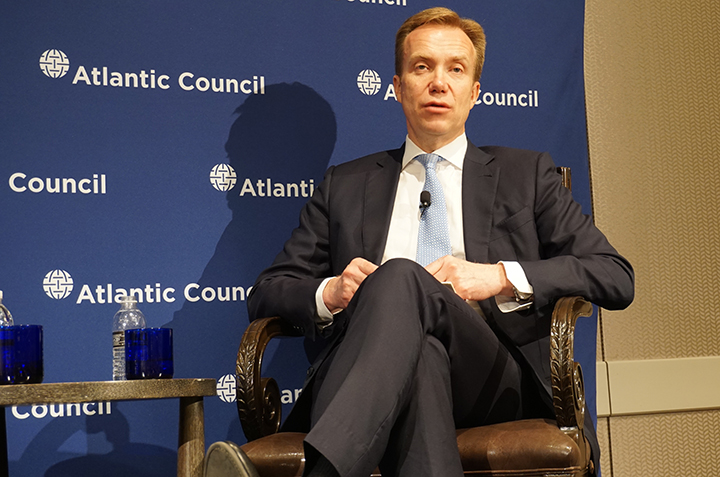 The migrant crisis straining Europe and security challenges in North Africa and the Middle East have made it imperative for a concerted effort to prevent fragile states from becoming failed states, Norway’s Foreign Minister, Børge Brende, said on April 14.

Many of the crises facing Europe today originate in a “belt of fragile states on Europe’s southern border,” the Foreign Minister said.

More than 1.3 million migrants fled to Europe last year. Of this number, Norway received more than 30,000 migrants, many of whom are fleeing wars in Syria, Iraq, and Afghanistan.

As a consequence of a combination of economic and security challenges, Brende warned that “the very fabric of our own societies are at stake.”

“We are more vulnerable than before” he said, “and the feeling [is] that the international order we have built over the past few decades is more fragile than previously perceived.”

Pointing to an additional demographical challenge—a large and growing population that is under the age of twenty in the Middle East and North Africa—Brende said this must be dealt with in a proactive manner that is focused on providing education, creating jobs, and ensuring growth and prosperity. “Fragile states must not become failed states by default,” he added.

Atlantic Council President and CEO Frederick Kempe, who introduced Brende, noted that “state fragility is becoming a particularly urgent challenge for European foreign policy, and not least because a growing number of these states are found in Europe’s extended neighborhood.”

Following his remarks, Brende participated in a discussion moderated by Esther Brimmer, a professor at George Washington University’s Elliott School of International Affairs and a member of the Atlantic Council’s Board of Directors.

Europe’s overall response to the migrant crisis has ranged from a welcoming sentiment in Germany to hostile, where Hungary has erected border fences. In remarks at the Atlantic Council on April 13, Albania’s Prime Minister, Edi Rama, said this response pointed to a “lack of a strategic European Union.”

“The migrant crisis is a serious challenge to European cooperation, the integrity of Europe’s borders, and to the asylum system as such. We need to find a better solution and it is urgent,” said Brende.

The Norwegian official noted that Europe has been forced to deal with the migrant crisis at a time when some countries in Europe still have high youth unemployment and close to zero growth. “When 1.3 million people are coming to Europe in such a short time and it happens at the same time as Europe is not out of an economic crisis…this is challenging,” he said.

“That’s why Europe has to deal with this in a way where we support…fragile states in areas where the migrants are coming from,” he added.

Brende said Europe cannot receive economic migrants at this time. But, he said, it will do its best to take in people who are fleeing conflict.

The European Union and Turkey reached a deal on March 18 under which all migrants who attempt to enter Europe via the Aegean Sea are sent back to Turkey. In a “one-to-one” swap, Europe will take in one Syrian from a Turkish refugee camp for every Syrian returned from Greece. That number has been capped at 72,000.

Noting that almost fifty percent of the migrants who have come to Europe illegally were found not to qualify for asylum, Brende said the burden of sending them back and the instability that it creates cannot be underestimated.

The massive influx of migrants has tested Europe’s borders.

“When 800,000 people transited through Greece last year…when you enter into Greece you also enter into the Schengen area,” Brende said, noting that people crossing the border have to be fingerprinted and the date entered into a system. “When 800,000 people just transit, this is not an acceptable figure and that is saying it a bit diplomatically,” he added.

While Germany has taken in the most number of migrants, Hungary has responded by erecting barriers to keep them out. “Some of the comments related to this has been…a major, major disappointment,” Brende said noting that some countries have been unwilling to accept migrants.

What is needed now is “real borders, real registration of the people who seek entrance into Europe, and we can only make a priority of those that need real protection,” he added.

Europe is also dealing with the challenge of the rise of far-right political parties that have seen their popularity grow as a direct consequence of the anti-immigrant sentiment that has followed the surge of migrants. “We have to look at this in a very responsible way,” said Brende.

NATO has unusually become part of the US presidential campaign rhetoric after Donald Trump, the Republican frontrunner, described it as obsolete. Trump has suggested that the United States scale down its contributions to NATO; and he wouldn’t care if the Alliance fell apart.

Brende described NATO as the “most successful military alliance” in history. “You should not fix what is not broken,” he said. The only way to continue on the track of prosperity and growth fostered by the Alliance is to “stick to the values that have brought us so far,” he added. The alliance will hold its annual meeting in Warsaw, Poland, in July.

The Norwegian Foreign Minister said that in the face of the multiple challenges it faces today, Europe cannot be complacent about its security. “Europe has to grow up, we have to realize that we have to take more responsibility for our own security,” he said. “We have to walk the talk.”

Brende said Europe’s “cardinal mistake” after the Cold War was to say that it no longer needs a strong defense because the Soviet Union had collapsed. Norway, he noted, is one of the few European countries that has not cut its defense budget.

On the question of the European Union’s relationship with Turkey—where the administration has increasingly cracked down on press freedoms—Brende said Turkey is aware that it needs to follow certain rules if it wants to eventually join the bloc.

“If Turkey wants to get closer to Europe they also have to come closer to the principles that are not up for discussion in Europe—human rights, media freedom, freedom of expression,” he added.