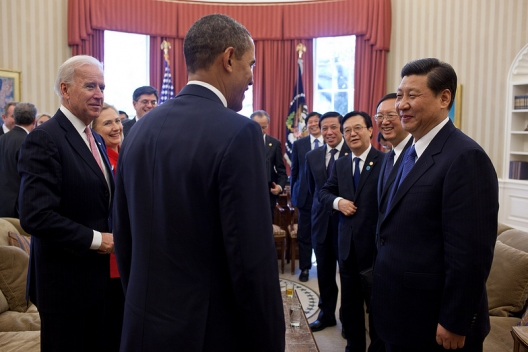 Sometimes foreign-policy success occurs almost inadvertently—and when least expected. When President Obama cancelled his planned visit to Asia in October during the recent US government shutdown, doubts amongst many in the region over the durability of the US “pivot” to Asia reached a crescendo. But a cascade of recent events, highlighted by B-52s defying a Chinese air-defense identification zone last week, have demonstrated US resolve and a sense of assurance about the US rebalance.

It began with  the remarkable US response to the horrendous disaster that typhoon Haiyan caused in the Philippines: more than fifty ships and planes, 9,500 troops and $37 million in humanitarian assistance. If there was any doubt about who answers Asia’s 911 calls, they were swiftly erased. Moreover, the US effort contrasted with what was seen as a puny and mean-spirited Chinese initial response of $100,000.

China’s Expanding Interests
The B-52 flyover was part of a US-Japan military exercise in the East China Sea that served as a huge rebuff to an ill-conceived Chinese action. There is nothing unusual about Air Defence Identification Zones (ADIZs) per se; the US and some twenty other nations have created ADIZs, which can require foreign aircraft entering the airspace to identify themselves. But China unveiled its ADIZ on November 23 with no consultation or warning in areas overlapping Japanese, Korean and Taiwanese airspace, triggering an ongoing international game of chicken. Not coincidentally, China’s ADIZ overlaps Japanese airspace over the Senkaku islands (called the Diaoyu Islands by China), tiny uninhabited rocks administered by Japan but claimed by China. It also overlaps a South Korean underwater reef, Socotra Rock (also claimed by China), which falls within Seoul’s ADIZ and on which it has built a research platform.

China’s ADIZ action was swiftly denounced in a statement by Secretary of Defense Hagel,who said, “We view this development as a destabilizing attempt to alter the status quo in the region. This unilateral action increases the risk of misunderstanding and miscalculations.”Secretary of State John Kerry added in his own sentiment that the United States “does not apply its ADIZ procedures to foreign aircraft not intending to enter US national airspace.” Hagel emphasized that the US would not change how it conducts military operations in the region. The B-52 flyover underscored both statements.

Both the Japanese and South Korean governments issued similar statements of indignation, and followed suit by flying planes over the zone, which they now do on a regular basis. China’s action will almost certainly energize efforts of Japan’s Prime Minister Shinzo Abe to boost Tokyo’s military capabilities and role. It is also triggering an anti-China backlash in Seoul, whose relations with China had been getting chummier, after ROK president Park Geun-Hye was warmly received in Beijing last October, as China has sought to take advantage of a downward spiral in tense ROK-Japan relations. China’s action led JoongAng Ilbo, a leading Korean daily, to lament in a major editorial that “Northeast Asia is drifting toward an ominous turbulence.”

An initial meek Chinese reaction—Beijing merely said it was monitoring the B-52s , then on November 28 flew warplanes over the area in an effort to save face—suggests miscalculation and again raises disturbing questions about China’s opaque decision-making process. Then China scrambled fighter jets when US and Japanese planes flew in the ADIZ. China’s move raised the stakes on what has hitherto been a maritime cat-and-mouse game, with Chinese paramilitary ships, and an occasional drone, entering the Senkakus’ territorial waters in a calibrated effort to undermine Japan’s ability to administer the disputed territory.

Why Now?
Though many view China’s policy elite as cunning long-term strategists, Beijing’s behavior, mobilizing most nations of the Indo-Pacific against it, would probably make Sun Tzu turn over in his grave. The ADIZ gambit appears to be part of a consistent pattern of behavior to expand what Beijing defines as its “core interests.” Next, China is likely to create additional ADIZs near disputed islands in the South China Sea over which Beijing claims sovereignty. It has pursued a “passive-aggressive” approach, developing a self-defense narrative while stretching the bounds of its interests in response to “provocations”, such as the Japanese government purchasing the privately owned Senkakus (to avoid their control by an ultranationalist provocateur), or the Philippines arresting Chinese fishing boats poaching in its offshore waters.

What is odd concerning China’s gambit is that it seems to contradict a recent trend in Chinese foreign policy, something akin to its own “pivot”. Beijing had been trying to walk back the perceptions of China as a rising irredentist, if not revisionist, power seeking to create its own “Monroe Doctrine.” First, there was what appeared to be softer talk of a “new type of major power relations” at the Xi-Obama summit in California last September. Then Xi launched a charm offensive at the Asia-Pacific Economic Cooperation (APEC) and East Asia Summit (EAS) meetings, filling the vacuum of Obama’s absence. Suddenly, China seemed to play nice with ASEAN, agreeing to discuss a code of conduct to manage the territorial disputes in the South China Sea. Then Xi sweetened the pot with economic deals and a proposed Asian infrastructure bank.

Renewing the Pivot
Yet all this seems undone by China’s ham-fisted actions—and all to the advantage of an Obama administration scrambling to erase growing doubts about its Asia rebalance, symbolized by the president’s no-show at the recent APEC and EAS summits. In the aftermath of the impressive US response to the Philippines disaster, National Security Adviser Susan Rice gave a major Asia speech on November 20 at Georgetown University designed to restore confidence in the administration’s Asia Pivot.  Rice emphasized, “rebalancing toward the Asia Pacific remains a cornerstone of the Obama administration’s foreign policy. No matter how many hotspots emerge elsewhere, we will continue to deepen our enduring commitment to this critical region.”

To underscore the point, she revealed that President Obama plans a trip there in April, and pointed to Vice President Biden’s December 1-8 visit to the region as further evidence of the strength of America’s regional commitment.

Rice stressed the importance of alliances, outlining US efforts to bolster those with Japan and South Korea. Importantly, while outlining the defense commitments made by the administration, Rice articulated a comprehensive policy encompassing economics, support for democracy, human rights, and broadly “advancing human dignity.” Rice stressed that “our foremost economic goal in the region is concluding negotiations for the Trans-Pacific Partnership and achieving Congressional approval.” And in one of the few explicit references to the adhesive nature of TPP, Rice added that the United States welcomes “any nation that is willing to live up the high standards of this [TPP] agreement, […] and that includes China”(italics mine).

While Rice amply depicted the complexity and ambiguity of US policy toward China, the one new direction she pointed to undoubtedly gave pause to US allies in Asia. She explained that Obama seeks to “operationalize a new model of major power relations” (NMMPR). To be fair, Rice’s description of it sounds a lot like current policy: “managing inevitable competition while forging deeper cooperation on issues where our interests converge…”

But Beijing appears to have in mind something rather different, and this is the long-term challenge to the pivot. Chinese president Xi Jinping put NMMPR forward in 2012, and both leaders endorsed it in aspirational terms at the October Sunnylands summit. But beyond a considerable economic interdependence and global issues such as climate change, it is a vacuous concept, depicted by Chinese analysts in the fuzziest generalities: win-win, mutual understanding and respect, strategic trust, etc.

The punchline in Chinese depictions of NMMPR is “respect for each other’s ‘core interests.” To China, this means that Washington should cease arms sales to Taiwan, not meet with the Dalai Lama, stop aerial surveillance near China’s borders, not interfere with bilateral Chinese territorial disputes, and perhaps implicitly accept a Chinese sphere of influence in the region. In many conversations with Chinese intellectuals and officials, when I ask, “if we had this new relationship, what would China do differently,” I have received only silence.

The problem is that China defines its “core interests” in nineteenth century terms of sovereignty and territory, but US core interests are fundamentally about access to the global commons—sea, air, cyber and space. While China complains that the US interferes in its core interests, Beijing seems to not understand that it interferes in ours on a regular basis.

If the vague NMMPR is more than a rhetorical device by which Beijing seeks to maneuver the US into accommodating its regional and global ambitions, it has to involve Beijing respecting a rules-based order—the opposite of its recent actions. Over time, the success or failure of the rebalance will rest in large measure on the state of US-Chinese relations. The current part-competitive, part-cooperative relationship, driven by classic “security dilemma” military competition, is not sustainable. Remaking the relationship such that it is more cooperative than confrontational will require finding a balance of interests that both Washington and Beijing can live with. The ADIZ flap is an urgent test, with demonstrates an urgent need for new procedures in contested airspace lest an accidental incident further escalate tensions.

Robert A. Manning is a senior fellow of the Brent Scowcroft Center for International Security at the Atlantic Council and its Strategic Foresight Initiative. He served as a senior counselor to the Under Secretary of State for Global Affairs from 2001 to 2004, as a member of the US Department of State Policy Planning Staff from 2004 to 2008, and on the National Intelligence Council (NIC) from 2008 to 2012.