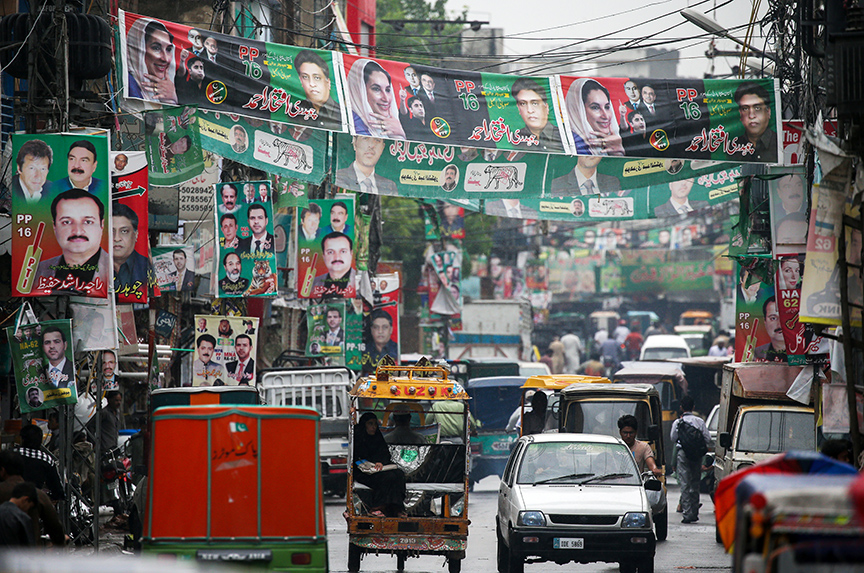 Pakistanis will elect a new parliament and prime minister on July 25 marking only the second transfer of power from one civilian government to another in the nation’s seventy-year history. Though this should be cause for celebration in a country where governments have been abruptly changed by military coups or presidential fiats, there are genuine fears that the election will magnify and unleash the centrifugal forces that divide Pakistan’s fractured polity.

Dynastic politics are clashing with an insurgent youth, and ethnic, linguistic, and sectarian issues are becoming the centerpiece of some regional political battles. Meanwhile, a large percentage of undecided voters has turned traditionally unreliable pre-election polls even more so. There is a strong possibility of a “hung” parliament at a time when Pakistan faces serious economic challenges and is under increasing pressure from the United States and its Western allies to do more against militancy and terrorism, especially in Afghanistan.

Many political parties have already laid the ground for post-election protests, based on pre-election rigging. There are around 2.5 million dead voters on the electoral rolls, which raises the possibility of ballot stuffing. Although a neutral caretaker government is responsible for the election, there are loud claims of interference by the military and the judiciary to the detriment of the disqualified and imprisoned former Prime Minister Nawaz Sharif’s Pakistan Muslim League-Nawaz (PML-N) .

The military denies any interference or collusion with the justices to disqualify members of the Ancien Régime, but there are credible reports of efforts by the military to nudge members of the PML-N to defect to the Pakistan Tehreek-e-Insaf (PTI), led by cricketer-turned-politician Imran Khan, or run as “independents.” The emergence of a breakaway faction of the PML-N running as independents with the clearly military-style election symbol of a Jeep is a manifestation of this trend. An independent status allows candidates to break free of the parliamentary rules that would have otherwise bound them to vote along party lines or resign from parliament. In the event of an absence of a clear majority for any political party, these independents will be critical to the formation of a coalition government.

Of course, the independents have the option to rejoin PML-N if the party surges on the wave of a public backlash against Sharif’s disqualification and imprisonment on corruption charges. Sharif is counting on such an outcome.

As always, the battle for Pakistan will be fought in its most populous province—Punjab—where the PML-N, under Sharif’s brother, Shahbaz, is toe-to-toe with the PTI. Khan’s party ruled the western Khyber Pakhtunkhwa province and by most accounts managed to introduce health and education reforms. In Punjab, the PML-N invested heavily in infrastructure and pumped millions into local development projects over the past year. In Sindh, former Pakistani President Asif Ali Zardari and his son Bilawal Bhutto Zardari’s Pakistan Peoples Party (PPP) is trying to maintain its hold on the rural vote while battling for political space in megacity Karachi’s nearly 25 million population against non-Sindhi minorities, including the Urdu-speaking descendants of refugees from India and migrants from the north. The province of Balochistan has a relatively smaller population, fewer seats in parliament, and is deeply divided among different ethnic and sectarian groups. Perhaps Pakistan’s most politically backward province, Balochistan tends to swing with the national political winds.

Much has changed since the last election in 2013 that led to the replacement of the PPP’s weak coalition government by Sharif’s dominant PML-N. The PPP ceded political space to the military during its five-year tenure.

A much-delayed census, the first since 1998, was completed in 2017. That led to new delineation of constituencies: some 272 single-member constituencies for the National Assembly that also has sixty seats reserved for females and ten for ethnic and religious minority groups. But the census surprisingly failed to recognize Pakistan’s heavily urbanized voter base and, therefore, retained a bias in favor of the rural vote.

The census also showed that around twenty-two million new voters have joined the electoral rolls. If this youth cohort comes out to vote on July 25 and uniformly swings in favor of change, the traditional parties—the PPP and the PML-N—will suffer and the PTI will gain.

As a result of its large population, the allocation of parliamentary seats is heavily skewed in favor of Punjab with its 141 seats. The Islamabad Capital Territory has three, Sindh sixty-one, Khyber Pakhtunkhwa thirty-nine, Balochistan sixteen, and the former Federally Administered Tribal Areas (FATA) twelve seats in the National Assembly. Meanwhile for the provincial assemblies, Punjab has 297 seats, Sindh 130, Khyber Pakhtunkhwa ninety-nine, and Balochistan fifty-one. Well over 21,000 candidates have filed their nomination papers, a drop from the 28,000 that took part in the 2013 elections. The first-past-the-post candidate is declared the winner, even if he or she does not have a true majority.

The Pakistan army, as in the past, will help provide security at polling stations and hopefully act as a deterrent to election-day shenanigans. Yet, disquiet persists about the military’s alleged behind-the-scenes manipulation of candidacies and formation of splinter groups of major parties like the PML-N and the PPP.

Khan’s PTI, a growing political force, hopes to break out of its provincial redoubt of Khyber Pakhtunkhwa and make inroads in Punjab as well as work with groups in Sindh and Balochistan to cobble together a national government. Khan hopes to capitalize on the visible income gaps in Pakistan’s growing cities, increasing unemployment, rising prices, and the general economic decline in leading indicators that has led the country to face a likely default of its global obligations.

According to Rashid Amjad, a leading economist, “A severe foreign exchange crisis threatens significantly the recent economic upturn [when GDP growth had crept back up to near 6 per cent annually].” He estimates that Pakistan faces a $25 billion financing deficit to meet its imports and repay external debts that are coming due in 2018. This is roughly 8 percent of the country’s GDP. Foreign exchange reserves have been declining and currently are only enough for two months of imports.

Meanwhile, the United States, in particular, and the West, in general, have ramped up pressure on Pakistan to curb terrorist financing and money laundering. Pakistan was put on the “grey list” of the global anti-terror financing watchdog, Financial Action Task Force (FATF), in June for failing to curb such financing. Significantly, China, Pakistan’s steadfast friend, did not prevent this FATF action.

If Pakistan fails to abide by the FATF’s directives it will face enormous difficulty in raising and moving money globally. The United States and the West, in general, could also use the International Financial Institutions, such as the International Monetary Fund and the World Bank, to squeeze Pakistan’s access to funding that it will need to keep its head above choppy waters. Pakistan badly needs IMF funding to meet its import and repayment obligations later this year.

Rampant unemployment is adding to the unhappiness with the status quo in Pakistan. If the youth, who increasingly represent a huge majority of the nation’s electorate, come out and vote and coalesce around Khan’s message of a “New Pakistan,” the former cricketer may realize his dream of becoming prime minister. But he, too, faces hurdles.

Turmoil within the PTI has been fueled by conflict between the party faithful and the newly inducted “electables” who have scampered from other parties on their own or on the instigation of the “establishment” (the favorite Pakistani euphemism for the military). Sharif coyly dubs these shadowy manipulators khalai maklooq (space aliens) who cannot be named nor identified publicly.

Khan is seen as the military’s candidate, but not everyone in uniform signs on to the pro-Khan view. They see him as volatile and autocratic and hence less likely to be a pliable tool of the military. Privately, in the past, Khan has expressed disdain for the generals. Not unsurprisingly, those videos have resurfaced. But, Khan now speaks positively about the military and says he would be able “to bring them along.” Khan is also increasingly seen as pandering to the religious right and has been ambivalent about the military’s campaign against the Pakistani Taliban; hence his derisory moniker of “Taliban Khan.”

The PPP appears to be a spent force on the national scene. It is no longer the broad-based national party it was under Zardari’s wife and former Prime Minister Benazir Bhutto, and her father—also a former prime minister—Zulfikar Ali Bhutto, in terms of its membership or ideology. The PPP is now completely in thrall to Zardari who managed to lose its important base in Punjab and the former North West Frontier Province (now Khyber Pakhtunkhwa). It is now struggling to retain its control of rural Sindh and hopes to capture enough National Assembly seats in Karachi to become a key player in a coalition in the new parliament. It is not clear, however, which coalition would accept it as a partner. Sharif is daggers drawn with Zardari and some of the PTI’s leading stalwarts defected from the PPP. Khan says he will not from a coalition with either the PPP or the PML-N.

All this raises the murky though distant prospect of an “Egypt on the Indus” scenario, under which increasing pressure from the West to isolate Pakistan and the prospect of civil unrest leads the military to step in and take over as guardians of the state for an extended period. It would then—as it has in the past—promise to restore economic order and political stability. It is unclear if that would be enough to satisfy the pro-democracy elements in Pakistan or in the West. Pakistan’s own history does not predict a happy ending to any such an adventure.

So, Pakistan heads into the polls as a fractured polity, without a clear vision of how it wishes to govern itself better and to provide for its growing population. Its traditional political leadership has failed it badly in the past. It is losing friends in the West and has been unable to break the deadlock of a “No Peace, No War” situation in its own neighborhood. With its strategic location, its youthful population, and enterprising middle class Pakistan deserves a better future than simply muddling through. We can only wait to see what the voters decide.

Shuja Nawaz is a distinguished fellow with the Atlantic Council’s South Asia Center. He is the author of Crossed Swords: Pakistan, its Army, and the Wars Within (Oxford) and is currently completing a book on US-Pakistan relations and the crises inside Pakistan from 2008 to the present.

Image: A street in Rawalpindi, Pakistan, is festooned with political parties’ banners ahead of general elections on July 25. (Reuters/Athit Perawongmetha)