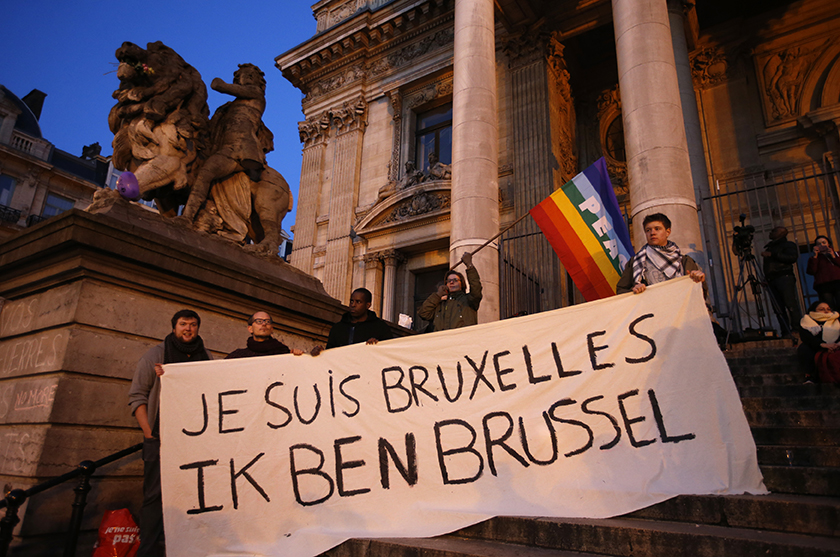 Salah Abdeslam’s arrest last week in connection with the Paris attacks likely sped up terrorists’ plans to strike Brussels, according to Michael Hayden, former Director of the  Central Intelligence Agency and an Atlantic Council board member.

With Abdeslam’s arrest following a four-month manhunt, the terrorists likely felt that they were “in a position of either use it or lose it in terms of the attack planning,” said Hayden, who also served as Director of the National Security Agency. The Islamic State of Iraq and al-Sham (ISIS) claimed responsibility for the March 22 attacks in Brussels in which dozens were killed.

It was evident that attacks had been planned for some time because they were “sophisticated, sequential, and, sadly, very effective,” said Hayden.

Michael Hayden spoke in an interview with the Atlantic Council’s David Ensor and Ashish Kumar Sen. Here are excerpts from our interview.

Ensor: What was your first thought when you heard about the attacks in Brussels?

Hayden: My first thought was: not surprised. This was predictable, in fact [there was] almost a sense of inevitability, sadly, just given the broad circumstances to what has been going on there for the last four months.

I suspect that what happened here was the attack that was being planned was accelerated because of the arrest [of Paris attack suspect Salah Abdeslam] last week by the Belgian police, and [the terrorists] felt that they were in a position of either use it or lose it in terms of the attack planning. [This  attack] had been in the works for a while because it was sophisticated, sequential, and, sadly, very effective.

The target country, the target venues, and the degree of violence that they were able to create [was not surprising].

Ensor: What are the implications for US and allied intelligence?

Hayden:  Number one, and I don’t mean to be harsh here, but I don’t hear anybody quoting Mr. [Edward] Snowden today, or Glenn Greenwald, or anyone wringing their hands over American  electronic surveillance. In fact, to the degree that Europeans are talking about American electronic surveillance, it’s along the lines of the question: what do you guys have? I think we will respond very powerfully and quickly to whatever it is our allies ask. It will be valuable to their overall investigation. We need to know what they learned so that we can then assess if there is any North American link to anyone involved in what happened in Brussels this morning.

Ensor: How likely is a similar attack in the United States?

Hayden: It is not zero, but it is less likely. We have very competent security services. We are blessed by distance. We are further away from the ISIS heartland. We are blessed by having fewer refugees at this time, which seems to have been a source for some of the attackers, at least in Paris. And culturally, we assimilate reasonably well. It is actually a national strength. We don’t have the kind of no-go areas that seem prominent now in Paris or Brussels, or frankly even in some British industrial cities.

Sen: What, in light of these attacks, can the United States and Europe be doing to step up intelligence sharing?

Hayden: First, we should work on perfecting sharing because we are looking at a common enemy that views us to be a common, indistinguishable target. Second, European governance is bifurcated; you have got certain functions that are performed in Brussels and certain functions that are retained by the state. Privacy and commerce and a lot of the soft sciences, so to speak, are controlled by Brussels which has very, very high standards. And now you’ve got the states, which are responsible for national security, who are actually limited by some of the high-end privacy rhetoric that comes out of the European Union institutions.

I actually think this is going to create some torque within the European governance structure as nations are going to want to go do the things they believe are effective, appropriate, and lawful, but which some of the European community institutions may frown on.

Ensor: Should we assume that ISIS has more attacks up its sleeve?

Hayden: I would. This is not me suggesting that the next shoe’s dropping is imminent. But they have shown remarkable resilience, continuity, fortitude—and I don’t mean it as a virtue—and they have stuck to this even in the face of fairly intense European policing action.

Another question that comes to mind is, even in the face of intense European policing action this plot was able to be nurtured and developed. So to what degree do some elements of Belgium’s or even France’s population view the police to be a predatory and an alien power, and to what degree was this plot allowed to be nourished and protected in the community in which the planning took place? Those are legitimate questions. I don’t have an answer, but someone needs to address them.

Sen: Why has Belgium become this hotbed for Islamic terrorism?

Hayden: Number one, I do think that their security services are less robust than you find elsewhere on the continent. Number two, assimilation has been a peculiarly challenging problem in Belgium for peculiarly Belgian reasons. There isn’t a homogenous parent culture in which to assimilate. It is a nation that is actually battling within itself between two dominant cultures—one French-speaking and the other Dutch-speaking. There are peculiar historical circumstances.

I am also told, although I have not researched this myself, that there are not many native-born imams for the Muslim community within Belgium and that they are largely imported from the wrong schools.

As the home for European institutions, [Belgium] also makes itself a fairly attractive target.

Sen: What lessons can Europe learn from the US experience disrupting terrorist plots?

Hayden: That reflexive reaction against electronic surveillance as somehow being at its core inconsistent with human values I don’t think is a useful response. I get it that we are balancing things that we would like to preserve, things like our privacy and our safety, but the European response has been far more reflexive on this than the American response.

The lesson to be learned is people have a right to privacy, they also have a right to live. How then do we conduct an adult conversation that allows Western democracies to use the tools they actually have to keep their citizens safe? This is not the old intel guy screaming for absolute license, but it is an intel guy saying the last conversation we had on this was hideously under-informed and skewed, so let’s do a do over.

Image: A banner displayed on the steps of the old stock exchange building in Brussels following terrorist attacks on the city on March 22 reads: “I am Brussels.” (Reuters/Charles Platiau)